Moncada's leadership important to the Troops 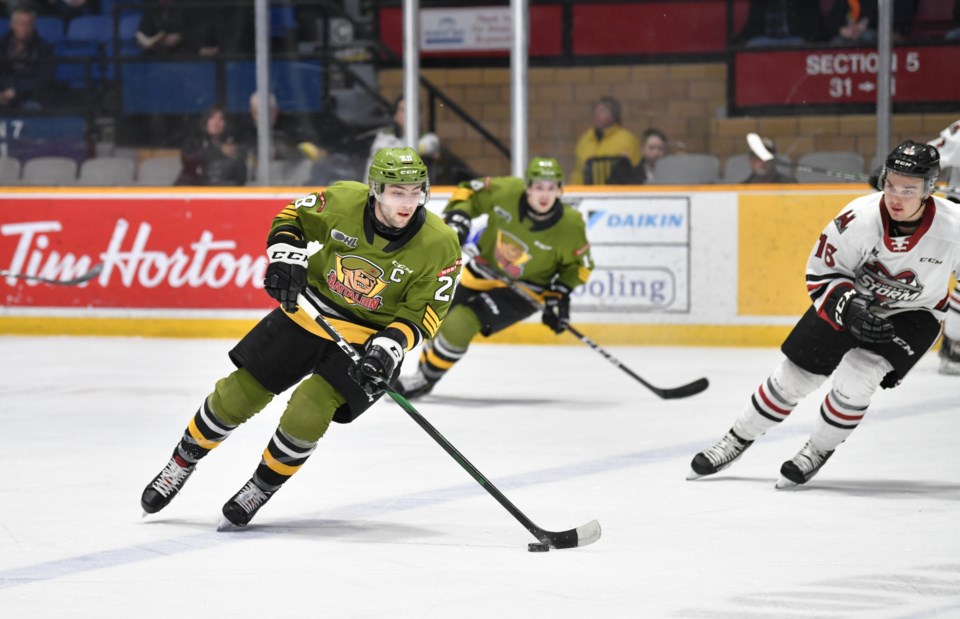 As much as teams want to compete year in and year out, the OHL is first and foremost a development league.

When looking at a team like the North Bay Battalion, two former captains speak to that strength as both Barclay Goodrow and Justin Brazeau returned for an overage year, only to parlay their efforts into contracts at the next level. After a 19-year-old season that saw him score 34 goals, 26 assists for 60 points in 62 games, the current Troops captain, Luke Moncada hopes to be next.

“Going into this year, I had a bigger expectation on myself, but that being said I didn’t want to see it as pressure, but I just wanted to have a bigger impact on the offensive side of the game,” Moncada said. “My previous years with the Battalion I worked and became a great defensive forward and I played a lot of penalty kill minutes and took some big faceoffs defensively.”

“I just wanted to add that aspect to my game where I could be more of an offensive threat,” the captain continued. “All summer long I was working and a lot of it had to do with my mindset heading into the season.”

“When you sit back and think about when we first brought him in, he came in and you could tell the smarts right away,” Battalion general manager Adam Dennis said. “He’s very coachable, did whatever we asked, but didn’t give himself much of a chance to open himself up offensively, didn’t want to take too many risks, and just wanted to make everyone happy.”

“As you see him grow and develop, you can see the confidence in his game now,” Dennis added. “You can see some of the goals he scored this year that quite frankly, we weren’t sure he was capable of in years one and two. To see him have the confidence that he had coming into this year, even more so in the second half, it is exciting and we were all thrilled for him because he is deserving.”

Even with all the summer preparations, however, Moncada says there were some moments of doubt before he finally took off.

“I think it was two or three games in and I hadn’t scored yet,” he said. “The doubt starts creeping in where it’s going to be another slow offensive year, but sure enough I scored and from that point, I didn’t really stop. I rolled with the punches and took advantage of my opportunities and I scored 34, which I was really happy with.”

As previously mentioned, the comparison to Brazeau and Goodrow is easy to make. When looking at both players' OHL resumes, their overage seasons jump off the page. Brazeau had 113 points in 68 games, while Goodrow posted 67 in 63, and an additional 24 in 22 playoff contests. Because of those seasons, both became Battalion legends.

However, when you look at their seasons before their OA years, (Goodrow – 59 points in 62 games, Brazeau – 75 in 68), both seasons represented career highs. Even more comparable, Brazeau’s previous career high was 37 points before his 75-point campaign. Moncada’s? 24 points in his sophomore season before his 60-point explosion this past year.

“Those are two great players,” Moncada said. “I got to play with ‘Braz’ for a couple of years, and he’s actually a good friend of mine. I got to watch his work habits, his mannerisms, how he carried himself, his work ethic and I kind of took things from that and tried to, not add that into my game, but to add that into the player I am in terms of the way I show up to the rink and my attitude about getting better.”

“I never got to see Barclay, but obviously I see him now in the NHL and anytime you get compared to an NHL player like that, and former Battalion captain, it’s an honour and it feels good to be in that conversation,” Moncada added. “I think next year, I want to continue taking steps forward and stay in that conversation with those two guys.”

“I think he really benefitted from playing with a guy like Justin Brazeau, having him on his team, they were very close. I think he kind of saw some of the ways Justin problem solved,” Dennis echoed. “Over the course of a 60-minute game, there are lots of ups and downs and if you can have the mindset to not let it bother you, and just move forward and fix the problem you just had and get back out there, it leads to success.”

“Luke’s attitude, I think it carries him a long way,” he continued. “He’s a guy that always regulates our bench, he’s an extension of our staff and he does things the right way and he is deserving of all the accolades he is getting. I think the other side is as you get older, the league gets a little worse for each individual player. You get older in the league and if you earn it, you get put into more offensive situations, which Luke has benefitted from, but you have to take advantage of it and he certainly did that.”

As Dennis touched on, as captain, Moncada is viewed as an extension of the front office staff. That role can prove to be very important, especially when the team was noticeably getting younger at the onset of the 2019/20 season.

“You’re dealing with 23 different types of individuals,” Dennis said. “When I was on the bench, I knew that there was probably five or six guys that I had a better chance of getting a message through than say coach Scott, coach Bill, or coach Ryan. Everybody has those, you seem to click with certain individuals, but Luke is a guy that gets along with everybody and he understands his role as a leader.”

“He’s not shy to tell a guy that he needs to be better, but he knows when to be sympathetic as well,” he continued. “It’s one thing to do that, but it’s another to have the respect of the room and it’s very important and it’s something that Luke has and is a reason all his teammates look up to him.”

“Our mindset as a team, and what the staff was preaching was we’re young and we knew that, but that doesn’t mean you can’t show up and compete every single night,” Moncada explained. “Obviously there are going to be some hiccups along the way, and there were some tough games this year for us, but that’s part of being on a young team.”

“That being said, our work ethic and the way we went about getting better as a team had to be good,” he continued. “We knew it was going to be a challenging year, but we did take big steps towards the end in getting better and it showed. We had six games left, and we were four points out of the playoffs and I think that if we got to play them, we could have very well been in the playoffs after a season where that didn’t seem very possible at all.”

For the first time since the team moved to the Gateway City, the Troops made a captaincy change after dealing Brad Chenier to the Sudbury Wolves at the OHL trade deadline. Still, the team could have waited out the rest of the season, but Dennis says the decision was easy.

“It was his body of work; we had seen it and we all had kind of talked and all knew that for sure Brad Chenier wasn’t going to be here coming into the 2020/21 season,” the GM said. “Knowing we needed to have a captain, Luke was the obvious choice based on his actions, on the things he had done, the things we saw on the bench and off the ice along with the work he had put in. All these things we want our young guys coming in to look at and say ‘hey, if you need any ideas of how to do it, look at Luke.’”

“It was tough, obviously there is a lot of emotion involved because Brad is sitting there and he’s one of my good friends and he’s going so it’s sad,” Moncada explained. “Then the captaincy, so I was very happy about that so it was a whirlwind of emotions. It was a lot to take in that day, but I was really honoured to become the captain of the team.”

“I knew that outside of everything happening with Brad, I just wanted to lead the guys in the right direction and be a good leader and set the right example for the rest of the team,” Luke continued.

As for expectations when he took over the role, Moncada says it was all team-based.

“There were no expectations in terms of statistics or anything like that, they want me to show up to the rink, be professional, carry myself the right way, and set the right example throughout the season and with Oulahen there,” he stated. “With Dennis, we always had an open line of communication. It was just about trying to get better as a team and it was every day where we talked about what we could do to get better today and I think that all paid off.”

A month after being named captain, Moncada made his presence known. In the midst of a seven-game losing skid, the Troops leader voiced his concern over the team’s lack of desperation. After voicing his opinion, the momentum around the team started to change, before the season was cut short because of COVID-19.

“With having a lot of younger guys like that, after the Christmas break and they’ve been around three or four months, they start to feel what they need to compete and win in this league, and as a team we started to figure it out,” Moncada said. “It started in practice, we worked hard, Ouly (Ryan Oulahen) was working with us every day and we did a lot of things right outside of the game, and it starts to snowball, and by January, February, we were starting to roll.

“Stan Butler always used to say ‘after the Christmas break, you’re not really a rookie anymore,’” he added. “After the break, we all came in and everyone knew what to expect. There was no nervousness, everyone came to play and we played hard and you saw it with the results. We won more games, people were having better individual success and things were going better for us as a team.”

While the leadership was certainly counted on a lot last season, heading into the new season, the leadership will be counted on more than ever with young guns like Ty Nelson, Dalyn Wakely and Tnias Mathurin looking to be added to the fold.

“With the weird time right now, my message to those guys is to stay ready,” Moncada said. “We don’t know whether the puck is going to drop in September, we have no idea, so all you can do right now is be over-prepared and be ready. It’s a ton of fun to play in this league and play for North Bay, so be ready and enjoy the ride.”

The captain also has a message for the seventh man as well.