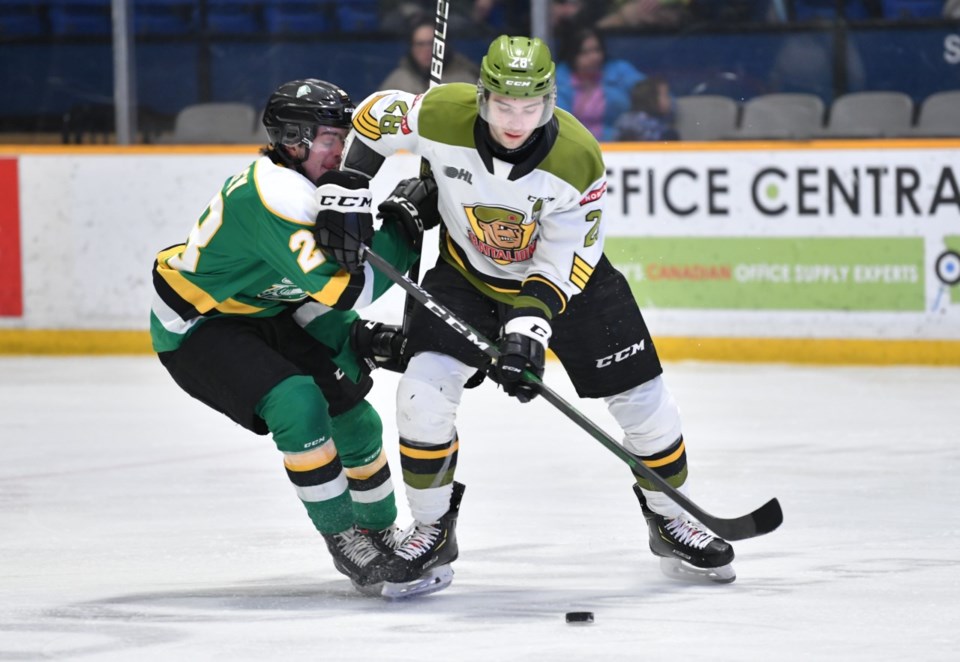 It has been said countless times during this pandemic that we are in uncertain times, and it will likely be said a few more before it is all said and done.

That especially rings true for hockey players in the OHL that have seen their seasons delayed multiple times. For North Bay Battalion captain Luke Moncada, the off-season has been described simply as weird.

“It’s not just hockey, but it’s everything else in your life that goes haywire and adapt on the fly and try to figure things out as we go,” Moncada said. “The toughest thing about it is you can’t really look into the future more than a day or two because you have no idea of what’s coming up next. I’m just trying to keep myself busy and fit and as ready to play as I can whether the puck drops on our season this year or next year, and trying to keep my sanity.”

Players in the league have already seen their season delayed multiple times. First, it was from the usual September start date to December, then to February, and now indefinitely. For a player like Moncada, who is set to enter his overage season, the thought of maybe never playing another game in the OHL has entered his mind.

“It’s going to creep in and keep you up at night sometimes,” the captain stated. “It’s not just a matter of playing another game in the OHL, it’s really your career, something I have been working at the past 15-16 years, to be a professional hockey player and to play the game of hockey as a living.”

“It’s really about my future in the game of hockey,” he continued. “It’s tough to think like that, and to look forward like that, but like I said, you can’t look into the future, you can’t read into it too much because you have no idea. A big part of keeping my sanity is trying not to do that and focus on day-to-day things, to better myself either in hockey or otherwise.”

Normally around this time in a season, Moncada as captain would be gearing up to lead the Troops on a postseason push. Yet, as with many things, he has had to adapt his leadership methods during these times.

“As of lately, we have all been in this long enough that we know where we are at and there is no use continuing to beat a dead horse in terms of ‘are you training, are you working out?’” Moncada added. “I think everyone in the OHL is dedicated enough to stay fit and ready. So, at this point I will talk to guys here and there, but the hockey talk in terms of training and working out has slowed down. As the captain, that has been my approach, keeping up with the guys, talking to the coaches and seeing where we are at on a day to day, week to week basis.”

During this uncertainty, the captain has also picked up new hobbies to keep himself busy.

“I’ve been all over the place,” Moncada said with a grin. “At the beginning, the first lockdown in March and April, that was a shell shock and you didn’t know what was going on so I was hunkered down in my house playing video games just thinking ‘ok, this is going to be a month or six weeks.’ As we moved into the summer and you get more of a grasp of what’s going on and that it would be longer and more drawn out, but you’re outside with your buddies playing sports when the restrictions were looser, training, and skating.”

“When the season got pushed back and the cases started to go up, I had to get through things on a personal level,” he continued. “A friend of mine and I tried our hands at craftsmanship, making tables, and painting. I started to read a little more, schoolwork, stuff like that to get you through. I don’t know if I am cut out to be a woodworker or anything like that, but it was fun to try some new things and get some joy out of a sad and boring time.”

When it comes to the tables, Moncada says he is proud of the work that went into them, but if you ask anyone else, he should stick to hockey.

“If you ask me, they’re pretty good tables,” he assessed. “Other people might not agree with that. The cost that it took for me to make them, and the time didn’t make sense for what I wanted to sell them for.”

Yet, he might still have a future in reviewing entertainment.

“I just finished a book called Defending Jacob, and it has an Apple TV show as well,” he said. “I love that book. A couple of good twists and turns, it’s a murder-mystery, crime novel. I have read some other good ones like Ego Is the Enemy. That’s more of a philosophical self-help book, and I have read a couple of books by Navy Seal Jacko Willink. I am kind of all over the place in terms of genres, but I have read a few I have really enjoyed.”

“At the beginning, I dove into Netflix pretty heavily with shows like Peaky Blinders and Tiger King,” Moncada added. “In the summer you wanted to be outside, and then when the fall came, I didn’t get into Netflix again as I found that it ate up a lot of my time. I felt if I got into a good show, I would spend the whole day on the coach and for me, I wanted to get my work in, read, and if I was on Netflix I wouldn’t get any of that in.”

As for the reviews of the shows, Peaky Blinders he loved, Tiger King, well…

“I didn’t love it,” he said with a laugh. “If that wasn’t on Netflix and not everyone was watching it, I probably would have watched one or two episodes. It was so crazy and so strange that with the whole COVID thing going on, it just fit perfectly right there in March and April with people sitting at home. With the craziness of it, I think that’s why people grabbed on to it, but I don’t think it was the best thing to happen to television.”

By talking about Tiger King in January 2021, it really puts into perspective that the pandemic started almost a year ago. On the player side of things, Moncada says it was a surreal time.

“I’m not going to pretend that I am a top doctor or anything, but I had watched the movie Contagion a couple of weeks before, so when I saw the COVID stuff it really sparked my interest,” he stated. “I read a few things, you saw the NBA go down, the NHL go down and then they said we were going to come back, obviously there is a bit of excitement there, but I didn’t think we would be back.”

“I definitely didn’t think the next season would have been affected at all,” continued Moncada. “I was thinking ‘ok, we have a bit of an issue here but it will be stomped out by June or July and I will be at a concert in July.’ I didn’t think that life would be all that different months later.”

With the NHL’s return on the horizon, Moncada says his attention is squarely back on the ice, and to picking up some tidbits from their players to add to his game.

“As a hockey fan, being without hockey all that time, and then the playoffs in the summer, I wasn’t a fan,” Moncada said. “It was hard for me to watch it, and I caught games here and there, but in the middle of July you don’t want to be on your couch watching TV. Now that we’re in the winter and its hockey season, you throw on the game and you get that feeling.”

“I’m a big Leafs guy, and as much as I love to see Kane and McDavid, I am getting my fix from the Leafs,” he continued. “I’m lucky they have great centres like Matthews and Tavares, and other great players in the league that you can pull things from their game as a player looking up to somebody on that side too.”

Of course, his attention was on this past weekend’s Blue and White game to see former teammate Justin Brazeau playing against some of those previously mentioned players.

As for a potential OHL return, Luke says it’s a waiting game.

“Waiting for updates, and as we get closer to the proposed start dates you ramp up your training that you would regularly do to get ready for the season and then the season gets pushed back. You take a couple of weeks and then get back to it. I did that three times, and this fourth time around I’m not going to get my hopes up to keep my peace of mind and stay ready throughout.”

“If things go back, great, and if they don’t, they don’t,” he added. “I’ve come to realize that a lot of this is out of my control and there is no use trying to beat myself up about it and worrying. All I can do is worry about what is going on in my life personally and try and take care of myself and try to make myself better.”

With the QMJHL already started (although currently on pause) and the WHL committed to playing, Moncada says he would be excited to hit the ice in the green and white again, however, with some hesitations.

“It’s my last year, so all things aside in terms of the future, it would be exciting to get out there and put on the jersey again and end things the way you always dream of,” said Luke. “You come into the league as a 16-year-old and you see the overagers get to graduate and it’s emotional and really fun for them.”

“I think if you boil down a hockey season too much it gets a little complicated in terms of scouting and where guys are going to end up,” he continued. “So, in terms of the future, I would be a little hesitant because a 68-game season with a full playoff is going to yield different results than say a 24-game season where you can only play your division. But in terms of getting out to play, it would be very exciting.”

Yet during all this time, the Seventh Man is still on the captain’s mind.

“Enjoy this time that you’re going to get with your family,” Moncada said. “I hope everyone is going to be able to stay healthy both physically and mentally. It’s a tough time for everyone, humans are social and like to see the ones we love.”

“I hope we do get to play and put on a show for you guys and give you something to be happy about,” he added. “It would mean just as much to me as it will to them. Hockey is an amazing game like that and it brings communities together and I think we need that during a time like this.”