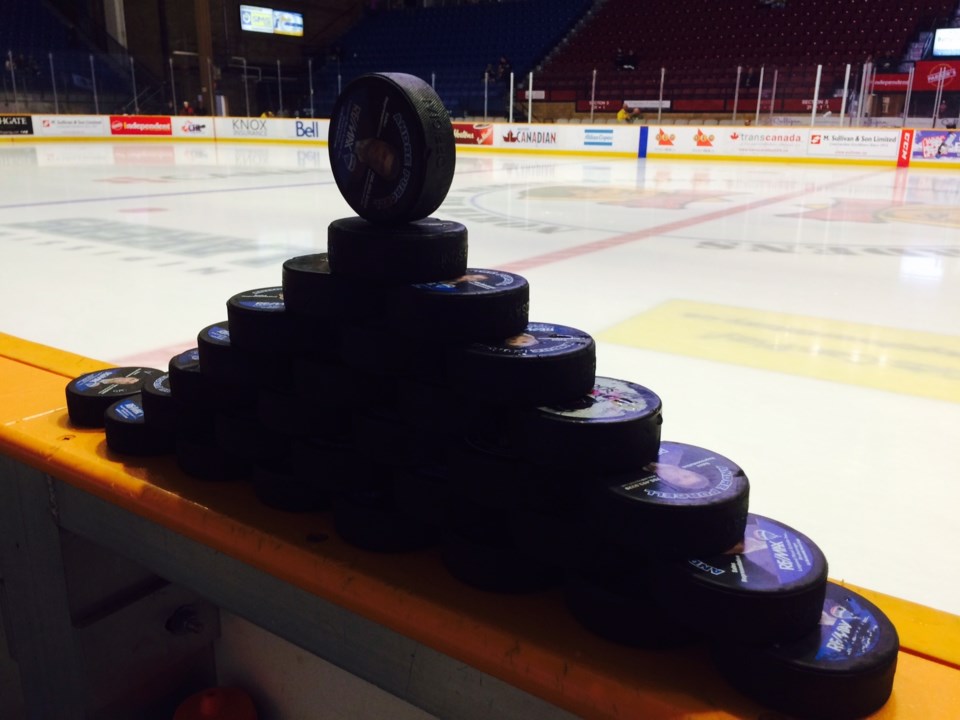 In some hockey circles you will hear a lot of talk of “good ol’ northern boys” when describing players from northern Ontario.

Legends such as Frank Mahovolich, Tim Horton, Bill Barilko, George Armstrong, and even as recent as Nick Foligno come to mind. Cut from that same cloth, however, is the president of the North Bay Battalion, Mike Griffin.

Griffin, born and raised in North Bay, played goal locally, before starring in Guelph in the OUA.

“You take enough pucks and maybe it knocks some sense into you,” Griffin said with a chuckle on the most recent episode of the Frontline Podcast. “That was a long, long time ago.

From there, Griffin would go on to work for the NHL, where he met a reporter at the Canadian Press named Scott Abbott. The two would forge a friendship that turned into Griffin eventually becoming the president of the Brampton Battalion, owned by Abbott. However, the hometown pull was too much to ignore when the team started looking for new potential suitors when their lease in Brampton was up.

“I left here many, many moons ago,” Griffin explained on the podcast.

“I had roots here and kept in touch with family and people I grew up with like Peter Chirico. Peter and I connected probably three or four years prior to the move and we were 11 years into Brampton and things were - as they still are - an extremely challenging market for anything below the major league level in the GTA.

“After the 10th year, I started having conversations with Scott as to what was out there and we had talks with several markets and do our homework. I kept coming back to North Bay being a market that I knew, and I knew the people. We had several conversations and the Mayor became involved.”

While not a Hockey Hall of Famer like some of the other names mentioned, Griffin is a recognizable name in North Bay as eventually, those talks led to talks of updating Memorial Gardens and putting a plan in place to become a successful small-market team, and the team moved north to the Gateway City.

For the first few seasons, the Battalion was a success on and off the ice, but in recent years the product on the ice started to wane, and so did attendance and interest.

However, interest has once again picked up as the Troops have been making headlines over the past couple of weeks, but not for the reasons that normally come during a long and cold winter. The reason? Not a tough 2-1 victory over the heated rival Sudbury Wolves, but because of an amended agreement on the team’s 15-year lease with the City of North Bay.

“The City approached us in regards to the issue of the clause that had a shortfall of season ticket revenue,” explained Griffin.

“That meeting was held in July. At that point, Scott Abbott said we were interested in having a further conversation because at that point he had honoured every piece of the contract to that point.”

The agreement’s clause would see North Bay pay the Troops $377,000 because of a season ticket shortfall.

“The second meeting was in August and the city offered a proposal that in lieu of the shortfall, they offered the future opportunity by changing the percentage issues that were included in advertising, suite licences and that sort,” Griffin said.

“At that point, it was Scott’s option to say ‘no I want to continue with the old agreement and I expect payment’ but he didn’t do that. It was workable because it was an opportunity down the road.”

According to Griffin, the agreement took the city out of a position where if the Battalion had rejected the deal, could have led to money exchanging hands and the team could opt into giving a 12-month notice to the termination of the lease.

Of course, some money will be exchanging hands, to the tune of $3.99 million. That’s not a small chunk of change either, but Griffin says that comes from an interest-free loan that Scott Abbott gave the city for renovations of Memorial Gardens.

“I don’t know of any financial institution in the world that would offer up an interest-free loan,” Griffin explained. “That money was originally transferred to the city in January 2014. So over that seven-year period, Scott received zero. The repayment was based on a portion of a cap recovery fee that came from tickets that we sold to the public and that money was transferred to the city as revenue and a portion of that came back to the private loan and the balance on that after seven-years was $3.99 million.

“So, whether it was the TD Bank, or the Bank of Abbott, the fact is that part of the agreement was they will repay that loan and they will do so when the money is transferred soon. That will absolve the city’s liability of that debt and we walked away from $377 thousand and the option of early termination.”

However, negotiations can cause some strained relationships between an OHL team and the city in which it resides. Even with some comments made by some councillors Griffin insists that Scott Abbott is thrilled with his relationship with the city.

“He indicated in our meetings that he likes being in North Bay, he likes his team and his players being here. It’s a different community from a big, big market. The smaller market creates some challenges financially because revenue streams are not what they are in the bigger markets, but Scott is comfortable with our relationship, which is very, very good.

“I applaud Scott for being prepared to walk away from expecting $377,000 contractually. He understood for the city’s sake, we’re in a pandemic and we’re all affected by it,” said Griffin.

“He’s committed to North Bay, and he was committed to the city when he offered up the five million interest-free,” he continued. “That was his commitment to show he wanted to be in North Bay to help with the renovations that turned out to be $16 million.”

In June 2020, Griffin says the two parties worked together to provide the OHL with an economic impact report for future use with the governments. By going through the numbers, the president says it shows how vital those renovations were and how having an OHL team can benefit a community.

“The numbers that came from the data input was approximately five million dollars a year of economic impact from the team,” he explained. “Which means over our first seven seasons, our total impact was $35 million.

Griffin adds that the team also adds 14 full-time jobs and 65 part-time jobs to the local employment that were new when the team moved here.

Back to the plan of making the Battalion a successful small-market team, Griffin says the team is on its way back to competitive hockey thanks to the personnel on and off the ice.

“We all have a very optimistic feeling about where we are headed,” said Griffin.

“The last two drafts that (general manager) Adam Dennis has overseen have been a huge opportunity for our future and we have been very impressed with what he has done.

“Ty Nelson will be a very, very special player not only in North Bay but in the league. He is oozing with personality, he has a tremendous package of skill, speed, and strength. He’s going to be a joy just like Dalyn Wakely, Tnias Mathurin, and others from that draft, and the draft before like Liam Arnsby, the twins, Ty Hollett, and big Joe (Vrbetic). We’re going to having a very interesting team and all of us are praying that somehow, someway we will get to see them before the end of the summer.”

He adds they are adapting to the new normal.

“We’re hostage to the situation,” he said. “We’ve got all the data we need; we’ve done our homework on digital ticketing because we anticipate that will be more required with no cash and people touching things, and our digital plan is in place.

“We’re waiting for the league to advise us and we are continuing a strong emphasis on our social media which has over 39 thousand followers combined. We want people to know we are still here, we’re looking forward to getting back and during this time our staff has been fully employed and our phones are forwarded to our cell phones and emails will be answered. The moment we get the news we are coming back, the first people that will know are our season ticket holders.”