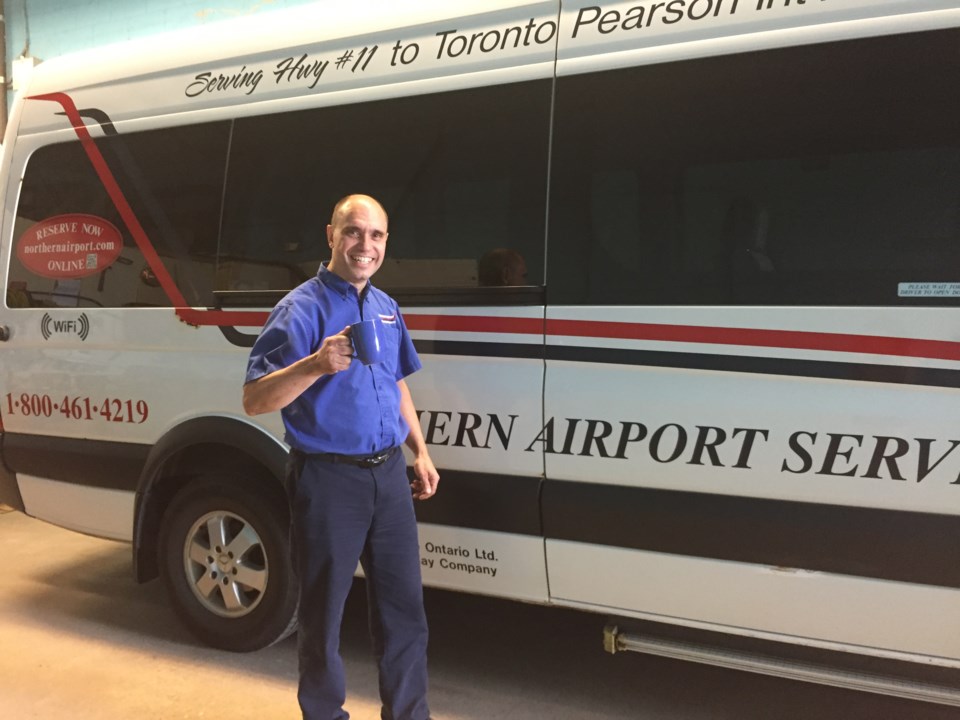 Mike Ianiro, owner of Northern Airport Service, standing in front of one of the company's vehicles.

Mid-Week Mugging is a series of features by BayToday. Each Wednesday, we will run a profile on a local business or organization that will be "mugged" with BayToday coffee cups. The subjects will then "mug" for our camera and we will tell a little bit about their story.

North Bay residents who travel to Toronto have various transit options. When the bus is too long of a ride, and an airplane trip is too expensive, there's a comfortable, fast, and fair-priced option found in Northern Airport Service.

Owned by North Bay native Mike Ianiro, the company is celebrating its 45th year of service. Ianiro has owned Northern Airport Service since 2010 after he was sold its licenses from previous owners. Prior to the acquisition, he was operating a competing airport shuttle service of his own.

Taking two trips every day from North Bay to Toronto and back, the service uses Toronto Pearson Airport as its hub. The shuttle also stops at other locations along Highway 11 to pick up and drop off passengers when necessary.

The day-to-day stress of making two drives to and from Toronto and having to keep track of everybody's location may sound like a lot to handle, but Ianiro finds comfort in the idea, citing it as one of his favourite things about the job.

"The stress of everybody always having to be somewhere...it's weird but it gets your adrenaline going," he says.

Unlike a number of other transportation services, Northern Airport Service is locally and privately owned rather than government-funded.

Being a small-town company, Ianiro is proud of its "firsts". Since taking over in 2010, he has been instrumental in implementing major upgrades to the service.

He also added that each time a vehicle is replaced, the replacement vehicle is always a "step-up" from the previous model in order to ensure a smoother ride.

In addition to providing a comfortable ride with luxuries such as onboard Wi-Fi, being environmentally-friendly is also considered when it comes to vehicle upkeep.

"In our shop where we house the buses we set up seven rain barrels where we collect the rainwater," he says. "The outside of the buses are washed using rainwater, which saves about 10 thousand litres of fresh water per year."

Above all, Ianiro says that his daily focus for the company is entirely on passenger safety, comfort and improving the overall rider experience.

About the Author: Jessica Roveda

Though she specializes in arts and culture, Jessica is always excited to be on the scene of something unfamiliar and learn more about the people involved.
Read more