Midget Trappers prepare for tough road at the Central Regionals 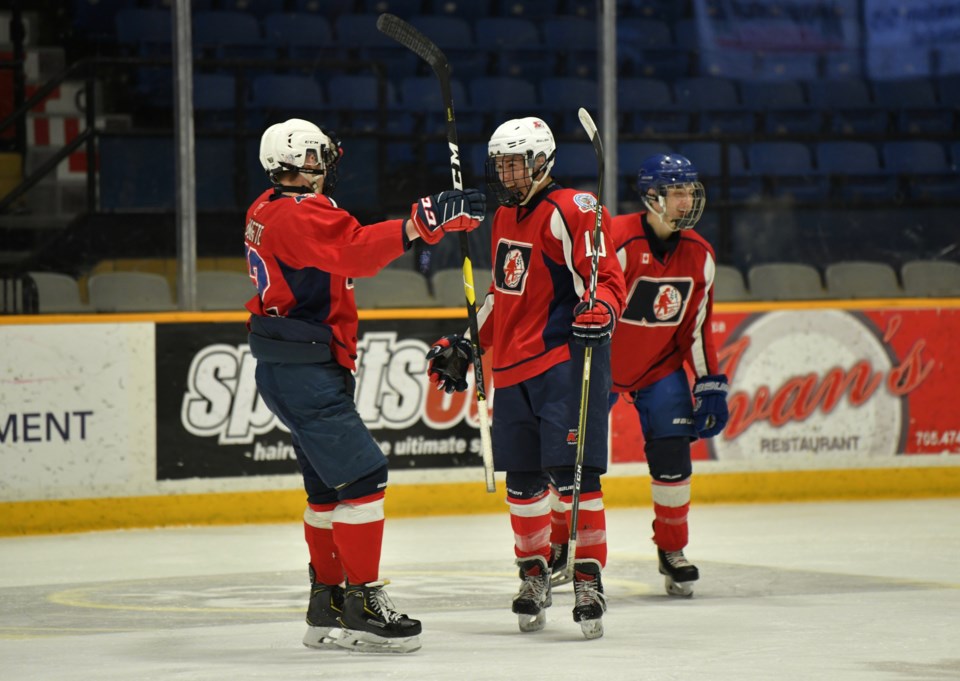 Trappers celebrate a goal against the Sudbury Nickel Capital Wolves in the GNML final in February. Photo courtesy Tom Martineau/BayToday.ca

The North Bay Major Midget AAA Trappers have achieved one of their goals which was capturing a Great North Midget League title.

That was about three weeks ago.  Now this team that went unbeaten the the regular season and playoffs in the Great North Midget League this year, is on to its next goal; a Central Regional Midget AAA title.

“I think any coach will tell you it is tough to keep your team focused for practice for three weeks so we had some ups and downs but I think the guys are enthused about going, they are excited and after a while they just want to get to a game and let’s get started and go,” noted Blanchard.

The Trappers, who also won three major midget tournaments in Ontario this season, take on a Toronto Young Nationals squad that beat them twice in tournament play this season.

“We are going down there to start off against the toughest competition we have met all year,” said Blanchard.

“There is no weak team. Looking at all the teams there and how they have done, these are all the top teams in each division and if we do not bring our ‘A’ game, every game, then we are going to end up in the loss column because the other teams are that good.”

Blanchard also worries his club has not faced stiff competition for a long time.

“As of January 22nd, we kind of had an easy road all the way through so now all of a sudden this road is becoming very bumpy and there are hills to climb and we have to find a way to climb those hills,” admitted the longtime North Bay coach.

“These teams are definitely not better than us but having said that, we are definitely not better than them so it is going to be the team that is most disciplined, and our specialty teams have to be at the top of our game because that is what is going to make the difference between a win and a loss is, I believe, our specialty teams.”

If they continue the path they are on, they would be able to reach their third and final goal and that is to compete at the Telus Cup national midget AAA championship in Thunder Bay in late April.