'These species of birds were in trouble due to the number of trees the birds would make their nests in being knocked down'
Apr 26, 2021 9:00 AM By: Sarah Cooke 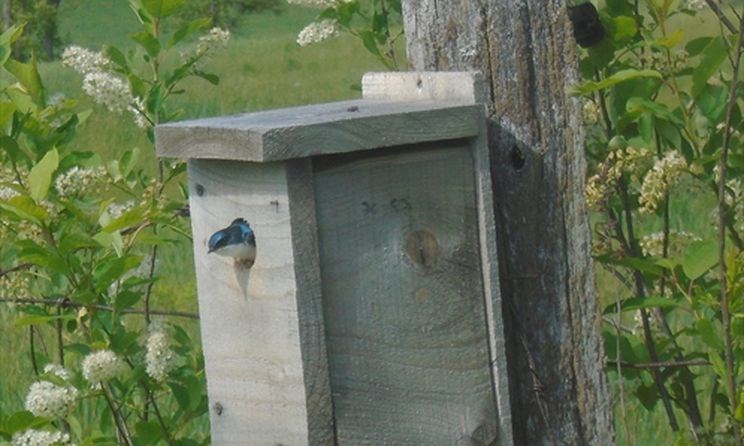 Al Last, Steven Bradley, and Jeremy Sintzel have been building and placing bird boxes around McKellar, west of Sundridge, since last spring.

But why do they do it?

Bluebirds, wrens, and tree swallows are cavity nesters and depend on woodpecker holes and nests to make their homes come springtime, according to Bradley.

“There is a need, that’s what I’ve discovered — research says the best thing man can do for a bluebird is provide nesting sites,” he said.

“Some landowners want to clean up their properties, and they  don’t realize how valuable that old tree is with the woodpecker holes in  it.”

The birds have taken up the offer of nesting sites, said Bradley, They had a usage rate of 70 per cent to 75 per cent.

“We were told if you get roughly 10 to 20 per cent your first year putting boxes out, you’re doing good,” he said. “So that was a really good surprise, and there were bluebirds, tree swallows, and a couple of  house wrens in them.”

Former member of the disbanded McKellar Conservation  Association, Al Last said that these species of birds were in trouble due to the number of trees the birds would make their nests in being knocked down.

“When you put these boxes up and you get reproduction at that level … there has to be some benefit for the environment,” said Last.  “The ecosystem is dependent on everything.”

The group has applied for the McKellar Beautification grant in order to be able to afford to make the bird boxes and stands out of cedar as well as helping with the costs of screws, nails, and T-bars for support and predator protection.

“We’ve been really fortunate with people donating materials to us,” he said. “We thought with this grant we can buy cedar and we can  buy the screws because that’s where our costs come in.”

For those interested in building their own bird box, Bradley said that he and his group researched what type of wood to use on the internet.

“They’re not a hard thing to build,” he said. “We put them  mostly on fence posts or we build our own posts with a T-bar and a  plastic tube underneath.”

Last, Sintzel and Bradley have put out over 150 bird boxes in fields where they have gotten permission from the landowners.

“We’re pretty much done for the season … we’re going to monitor the boxes, see what’s being used, and then decide if more need to be put in,” said Bradley.

“Once the birds are all done, we go around and clean out the old nest from the box, and it’s ready for the next breeding season —  it’s an ongoing thing.”

Sarah Cooke’s reporting is funded by the Canadian government through its Local Journalism Initiative.