Martial Artists come back from Greece feeling like Gladiators 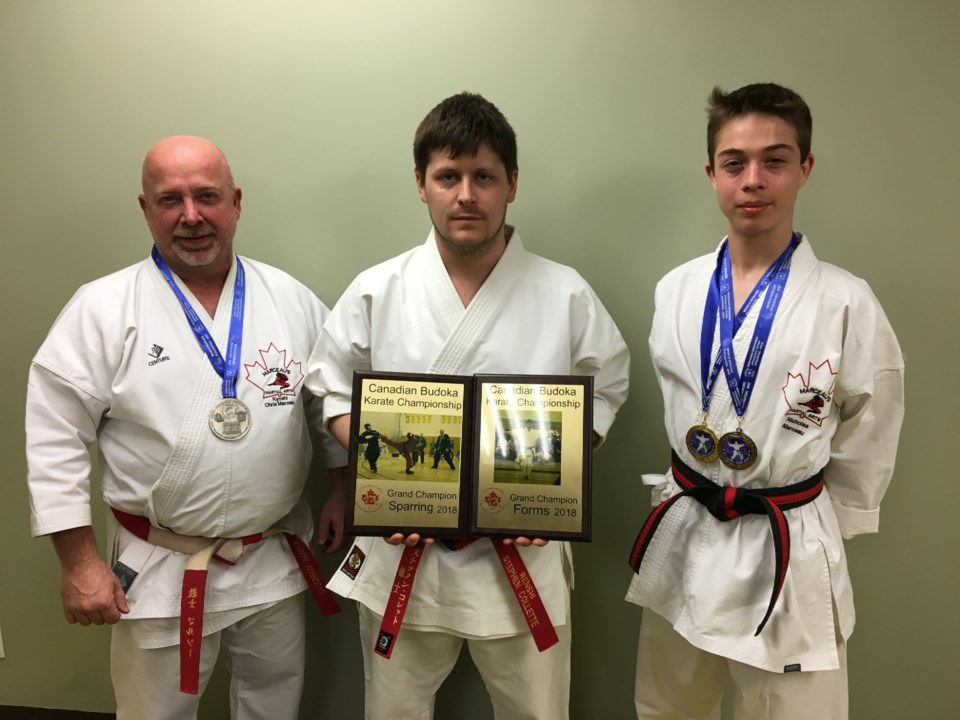 Chris Marceau and Nicholas Marceau show off their medals from Greece. They were winners the same weekend Stephen Colette (middle) won the title in forms and sparring at an event in Sudbury. Photo by Chris Dawson.

Chris and Nicholas Marceau are back in North Bay after an incredible experience in Athens, Greece.

The father and son duo from Marceau’s Martial Arts and Fighting Systems in North Bay, traveled overseas to compete at the World Kobudo Federation’s World Martial Arts Convention in early May.

See related: Father and son prepare for Martial Arts trip of a lifetime

Nicholas, who recently turned 15, had a first in "weapons" and a second place finish in "forms" against international competitors from around the world.

“My first place with weapons was pretty interesting because I was supposed to do my form with my sword but when we got there no one had a sword for me to use so I ended up using my staff which I was not expecting at all and I still managed to get first place. That was pretty cool,” said Nicholas.

“With my open hand forms I came in second to another person from Canada that lives in Kingston and we are good buddies so that was pretty cool.  It wasn’t first place but at least one of the Canadians got it.”

The older Marceau did not come home empty handed, finishing second in Weapons Forms, behind a competitor from Quebec.

While coming home with hardware from the international event was fantastic, the two believe the experience itself traveling together to compete in mythical Greece was even more amazing.

“All the mythology that I was excited about when I was going there was exactly as I imagined, better, if not that,” said Nicholas as he and his father visited places such as the Parthenon and Zeus Temple.

Chris says it was simply a trip of a lifetime.

“We saw stuff that was absolutely what most people only see in a picture,” said Chris.

“To watch the walking in of the flags and have 34 countries represented and watch the Canadian flag come through the stadium was absolutely thrilling to see and it was a good friend of ours that carried it in.”

The Marceau duo also thanked the generosity of others that helped get them to the international event.

“We have to thank the community as far as the U.S. that helped us out, and across Ontario,” said Chris Marceau.