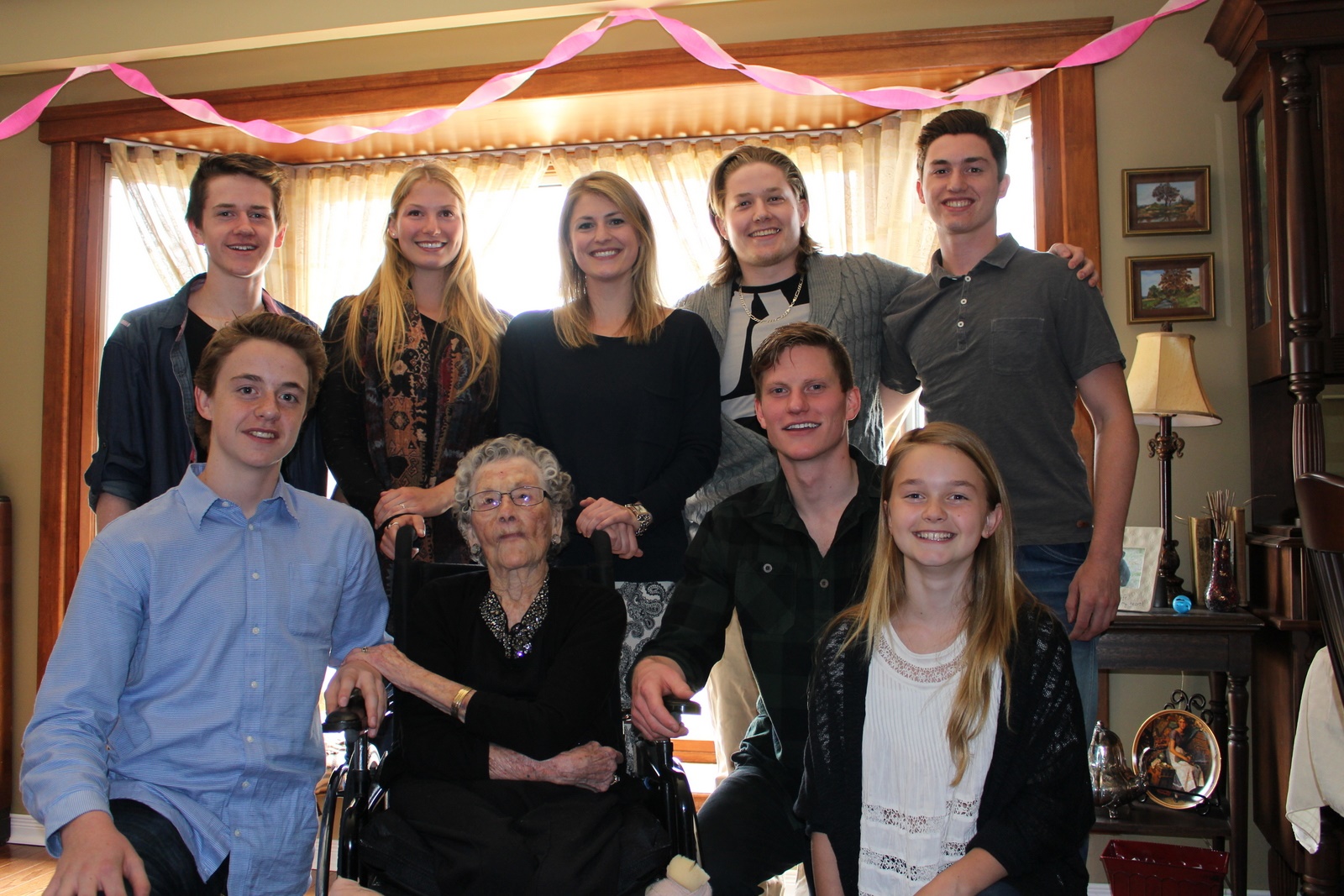 She spent her first 36 years in Winnipeg, her next 64 years in Thunder Bay and the most recent 10 in North Bay, says a story submitted by her family.

Dolly becomes Canada’s newest “Supercentenarian and celebrated along with friends and many of her family visiting from Calgary and Kamloops, BC.

Among those who have made their age public, Dolly is now likely the 5th oldest person in Canada (see below ** for more information about determining Canada’s oldest people).

Dolly’s family attribute her longevity to genetics, eating well but in moderation, and lots of full-fat cream and butter.

She never smoked, and never drank until her seventies when she started enjoying the occasional scotch.

Today, she enjoys coffee in her special cup from a 1970’s Dominion store promotion, a daily light beer at 2 p.m. and maybe a little wine with dinner.

She was born Ellen Box in Winnipeg in 1905 before Alberta and Saskatchewan were even provinces and had five siblings, most of whom lived well into their nineties.

Her father John Box was a prospector for most of his working life and was one of those seeking fortune in the Klondike gold rush.

Her mother Virginia Beauvette sadly passed away after giving birth to Dolly’s sister when Dolly was five.

Her father continued to raise the family, with the help of her older sister Norah and her mother’s sister, on a small general farm in St. Vitale (now part of Winnipeg).

Since then, Dolly has always lived in urban settings, as she has less than fond memories of picking potato bugs on the farm.

Given the nickname Dolly in her late teens for her fashion sense, she worked at Eaton’s in Winnipeg creating and making fashion accessories such as flowers from ribbons.  She remembers the excitement when Eaton’s had its first escalator installed.

When she married Dave Gibb in 1928, she was forced to leave Eaton’s as they did not knowingly employ married women in those days.

Dave was a talented metalsmith who worked for the railways in Winnipeg.

In 1941, the family moved to the Westfort area of Fort William (now part of Thunder Bay) where he joined the war effort at Canada Car building airplanes.

Dolly was a homemaker, a talented cook and seamstress, and very close to both of her daughters.

Dave Gibb passed away in 1968 when he was only 62 (he was also born in 1905), and Dolly was luckily able to continue to live on her own in her tiny 425 square foot, two bedroom house until her 100th birthday.

After Dave’s death, she enjoyed the companionship for many years of family friend Herb Weinberg who had also lost his wife.

She cooked for him and helped him with his business, and he drove Dolly once or twice a year to Sue’s family in North Bay, and Eleanor’s family in Kamloops, stopping to see her siblings, in-laws and their families throughout the west.

Known as “Nan” to her grandchildren, they would anticipate her arrival and the wonderful scones and baking that would come with her visit.  As they got older, they and their children appreciated the wonderful crocheted afghans that Nan made everyone.

Dolly was an avid bingo player and very enthusiastically joined daughter Eleanor Duggan on many trips to Reno, Nevada.

Sadly she lost her favourite bingo buddy when Eleanor passed away in 1991.

In 2005, Dolly moved to North Bay to live with her daughter Sue and son-in-law Dave.

In spite of Dave’s death in 2007, Dolly and Sue continue to live together thanks to Sue’s determination and the great support of granddaughter Jane Wilkinson, her husband Derek and their three sons.

Dolly and family are also very grateful for the help of kind neighbours and friends, the Cassellholme home care team, Paramed nursing care and the generous Dr. Wendy Graham.

Her hearing is challenged and she is confined to a wheelchair, but otherwise she enjoys good health and a sharp mind with a very strong detail-oriented memory.

Her daily rituals also include the Wheel of Fortune at 7 p.m. followed by Jeopardy.  And don’t try and convince her that she could watch it recorded at any other time.

She celebrated her birthday with five of those grandchildren and their spouses and children, along with daughter Sue and son-in-law Terry Duggan from Kamloops.  Also joining the birthday celebration was North Bay Mayor Al MacDonald and Nipissing MPP Vic Fedeli.

* Note that the surname of her daughter Sue and family is purposely not being mentioned for the security of Dolly and Sue.
** Note that there is no public central government registry of oldest persons, so there may be some Supercentenarians who choose to remain anonymous.  Rankings such as those available on the Wikipedia “List of Canadian Supercentenarians” page  ( https://en.wikipedia.org/wiki/List_of_Canadian_supercentenarians ) are based on media-reported cases.

The volunteer-run Gerontology Research Group (GRG – webpage at grg.org) maintains a database of those who choose to make their names public.