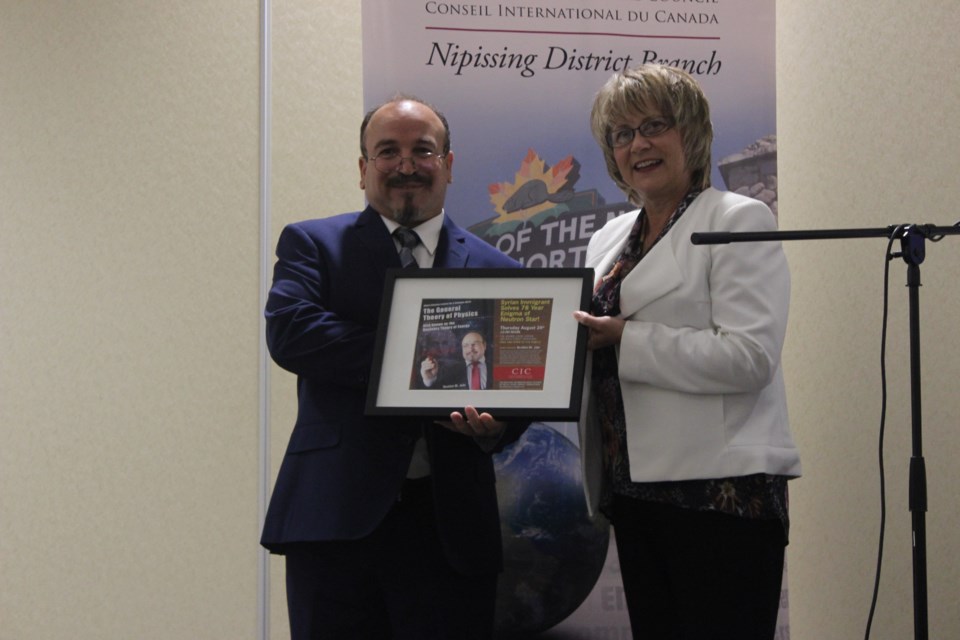 Ibrahim M. Jabr has worked on solving the mystery of the Neutron Star and presented his findings Thursday. Photo by Ryen Veldhuis.

For 78 years aspects of the neutron star have been shrouded in mystery, but a newly established local—Ibrahim M. Jabr, who came to North Bay from across the world last year—has reached for the stars and has begun unraveling the mysteries.

Thursday, Jabr presented his discoveries to scientists, community and government leaders, the North Bay Astronomy Club, and several other invitees.

“The significance of this discovery is, for example, we can create new materials, like build new space ships that can withstand high speeds and pressures,” Jabr said. “We can use it in the medical field, because we can apply neutron technology, like seeing the smallest things inside atoms.”

Based on the calculations of Richard Tolman the Neutron Star limit was proposed by Robert Oppenheimer and Volkoff Grenze, in 1939. These astrophysicists defined the TOV limit to be 0.7 solar masses. A new estimate was announced in 1996 by scientists stating that the Neutron Star limit was between 1.5 to 3 solar masses, with a diameter of about 20 km.

Then, in 2008, NASA estimated the smallest Black Hole to have a solar mass of 3.8 and a diameter of almost 24 km. Sometime later NASA’s report was withdrawn and they re-estimated that the Black Hole is between 5 to 10 solar masses. As of 2008, scientists and researchers were unanimous in their opinion that the Neutron Star is approximately 20 km in diameter.

This historical data demonstrates that the parameters (mass and diameter) of the Neutron Star and the smallest Black Hole have been modified several times.

Until now, what has still remained unknown are the real values of the mass of the Neutron Star and its diameter, the largest angle of light deflection passing near the Neutron Star, and the value of the mass of the largest particle created from the Universe, before the Big Bang. As well, the global scientific community is still searching for the particle after Higgs Boson and the last particle in the Universe.

Utilizing the principles of his “General Theory of Physics” (incorporating over 30 years of research, enquiry and application), Mr. Jabr has completed the very complex task of developing theoretical mathematical equations to define the diameter and mass of the Neutron Star and theoretical equations of the particles, mentioned above. These are the keys to understanding how the universe was created and will evolve.

"These scientific solutions to historical questions will to lead to many very important applications in various fields including: industry, communications, medical, neutron-technology, renewable clean technologies and the potential to solve many global issues, such as climate change," Jabr said.

But being in Canada presented him with the right environment and opportunities to pursue his research.

"I’m very proud to be here,” he said. “I came to Canada with my family, outside when we land at the airport, everything is white. I said I escaped from fire to die here in the snow? When I entered the airport, I was surprised when many people crowded and clapped. When I discovered it was for us, I immediately warmed and I feel safety and warmth in Canada. So Canada gave me everything, before I give it everything, so I will now return this favour to Canada.”

Anthony Rota, MP Nipissing-Timiskaming said he was pleased to see the progress and difference Jabr was making in such a short amount of time—only being in Canada for just over 18 months since he arrived from Syria.

“We have people coming in from other countries where they’re inhibited to expand on what they can do and really that’s the Canadian dream—making it here,” Rota said. “Many of us come from families from other countries. What makes it better is if you look at other people coming to Canada, they bring the best from their country has to offer—and they are the best their country has to offer. By coming here and adding it to the Canadian fabric is what makes this country so strong. I think here we have a prime example of a gentleman bringing his knowledge and background here and developing it on Canadian soil. Based on what I’ve seen so far, there is a lot of potential to improve life, not only here, but around the world.”

Ontario extends emergency orders
Jul 9, 2020 7:44 AM
Comments
We welcome your feedback and encourage you to share your thoughts. We ask that you be respectful of others and their points of view, refrain from personal attacks and stay on topic. To learn about our commenting policies and how we moderate, please read our Community Guidelines.