'The intent is to keep your hands busy while your mind is doing something else so I wanted him to come up with a design that is more discreet.' - Jordan Miller, local Fidget Spinner Designer.
May 29, 2017 10:30 AM By: Chris Dawson 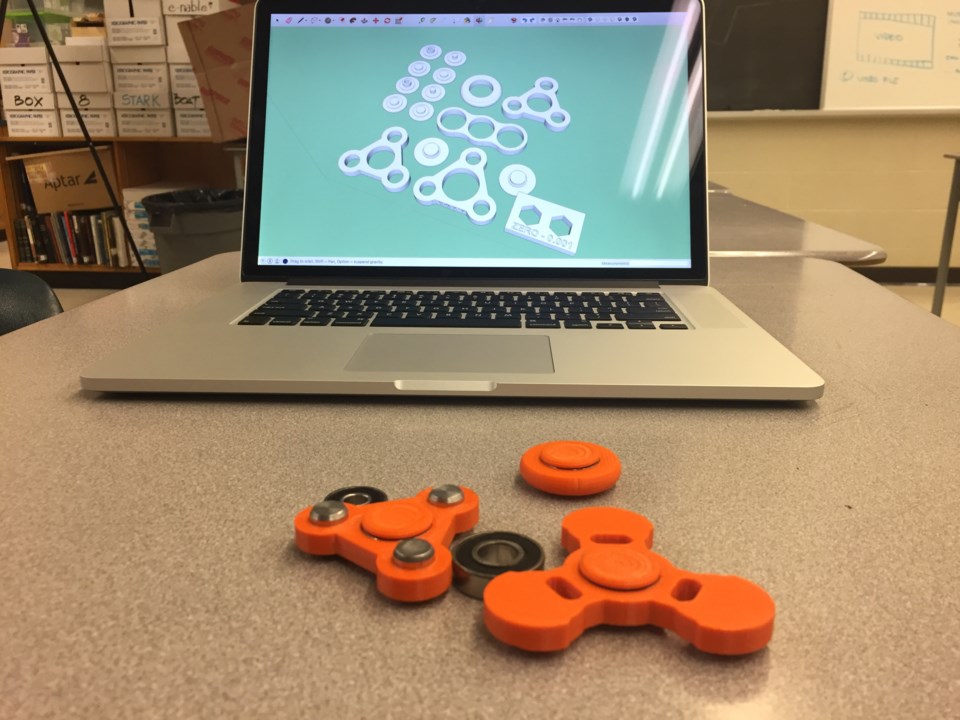 But when he and his classmates were spinning their ideas in their Technical Design course at West Ferris Senior Secondary, Miller came up with an idea of his own; to create new and less distracting versions of the popular Fidget Spinner toy.

“It’s a pop culture icon, it’s become a trend but it also has real benefits . . . (for) people who have ADHD, and have trouble sitting in class for long periods of time,” said the grade 11 student.

There is no question the fidget spinner has become the most talked about toy in 2017.

Should fidget spinners be banned from schools? Take our poll.

Like Miller claims, the spinning device is supposed to help children focus and concentrate but some local schools have recently outlawed the spinning toys from schools because they feel they are a classroom distraction.

Miller’s idea is to come up with a smaller, less distracting toy that can satisfy teachers.

“It’s too flashy, it’s too popular, so I said let’s take away the size and make it a little bit smaller,” said Miller.

“We can design it for what it’s supposed to do and that’s to sort of distract yourself instead of playing with a pen or something.”

Miller says they have worked on a few prototypes, one he called “brass knuckles” for instance.

“We started with no weights because bearings are expensive but it does not spin as well as one with bearings,” said Miller.

“After that we kind of evolved, we tried different models instead of three (prongs), we did two.”

Miller hopes to customize his spinning handiwork and perhaps use the toys - which would be made with the school’s 3D printer - as a fundraising tool.

Miller has been getting some help on the project from his instructor Michel Chenier, who approved the project idea and even came up with another much smaller fidget spinner version.

“The intent is to keep your hands busy while your mind is doing something else so I told him I wanted him to come up with a design that is more discreet,” Chenier explained.

“I came up with one which has different textures on the middle nut here to fit on a finger or a pencil. It goes onto a knuckle like a ring and could even be in your pocket.”

Chenier likes the idea enough that he will be creating a fidget spinner project for his grade 10 class.

“They will design them on the 3D printer and it has to be discreet,” he said.