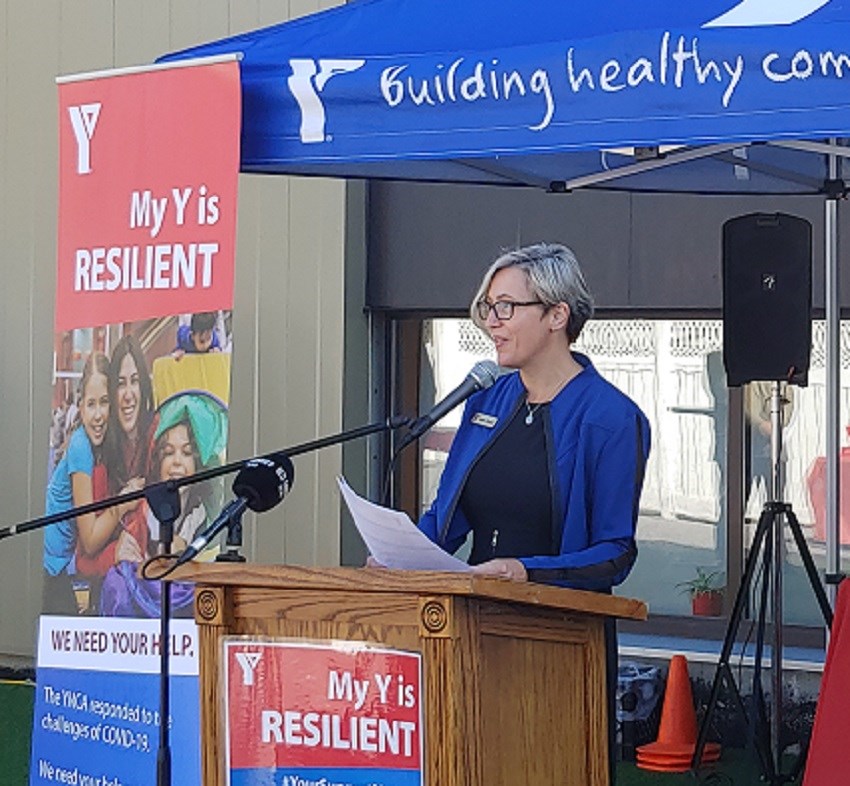 When it comes to tackling the monumental task of raising $1 million in two markets, the president and CEO of the Northeastern Ontario YMCA and her family are pleased to lead by example.

Helen Francis and husband Heiko Leers demonstrated just how serious they are about saving both the North Bay and Sudbury YMCAs, as they pledged to match dollar-for-dollar the first $100,000 donated to the cause, as part of the My Y is Resilient campaign, Wednesday.

"The goal is to keep us whole and keep staff employed as well as provide those programs and services for the community that will be needed even more than pre-pandemic," says Francis.

YMCA officials and supporters stressed the effect the loss of the organization would have on the community. Some 200 jobs are at risk locally, plus another 200 outside North Bay, not to mention 1,500 daycare spaces across the region. The non-profit says it also works with families — up to 25 per cent of its membership — to ease the financial commitment to access gym, fitness, and aquatic services, among several others geared to families.

Francis concedes there are steps that can be taken to mitigate lost revenue but to continue to operate at this level, serving such a large segment of the population, will mean the fundraising campaign has succeeded. In July, Francis disclosed revenue loss at approximately $1.4 million.

"We never want to truly reach such a perilous position of putting the entire association at risk. There are other options, we can close component parts. None of us want to get there, we feel there's value in every single functional area that we offer," she says.

Under the YMCA NEO umbrella, the North Bay and Sudbury chapters have set a goal of raising $1 million each over the next 18-24 months to help offset fixed continuing costs and lack of membership revenue for several months since the onset of the COVID-19 pandemic.

The North Bay YMCA reopened with strict health and safety protocols in early September, giving members and the public an opportunity to experience the necessary changes to its programming before resuming payment for memberships.

Francis says the goal is to get the revenue restored so difficult decisions about staffing and facilities can be avoided.

"Our timeline is definitely tight," says Francis. "Right now we are anticipating our cash flow really tightens up for us in the new year."

She says the news is good as far as membership renewals go. The Y had been working under the assumption that 50 per cent of members would return but she says they will surpass that goal. Francis says this "extends the runway," but for an organization with $18 million in annual revenue, that missing $3 million from the pandemic is difficult to overcome as they reopen.

"This campaign will help us offset that," observes Francis, "and we're very happy about the momentum we're building — and that we'll be here for the long run."

"We have been having quiet conversations in the background with potential sponsors both old and new. Their response to date has been very positive," says Francis, adding some of the YMCA NEO's partners have already stepped forward with pledges totalling approximately $400,000, not to mention the show of financial support from Francis' own family.