Local hockey star excels in the crease — and the classroom

Former North Bay Trapper Gaudreau has collected plenty of on-ice hardware during his career but says the scholastic award 'means a lot for my family, as both my mom and dad focus highly on schooling. To achieve this, it is definitely an honour.'
May 15, 2020 4:00 PM By: Stu Campaigne 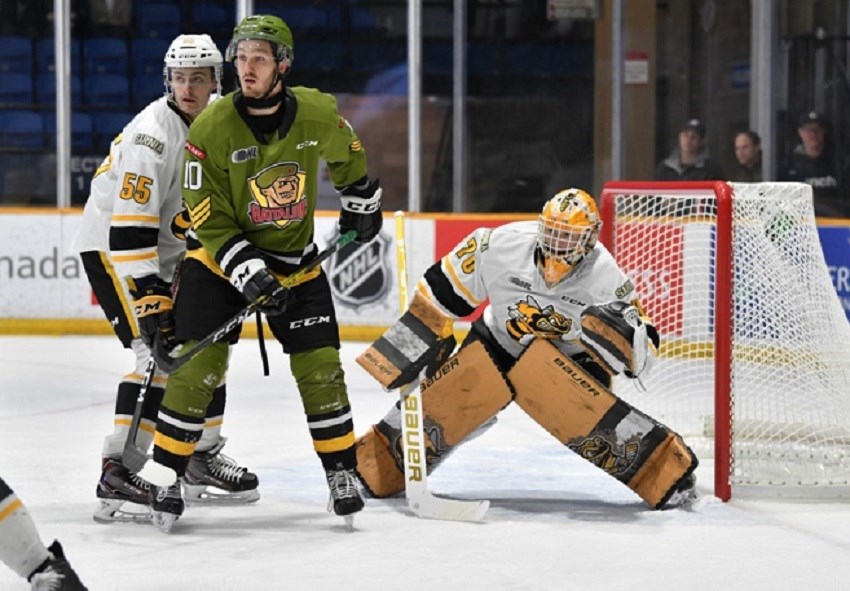 Sarnia Sting goalie Ben Gaudreau of Corbeil is getting some recognition for his off-ice work. Photo by Tom Martineau.

Benjamin Gaudreau is all about class.

The Corbeil student-athlete keeps his grades near the top of his class. He led all goalies in his draft class. Most of all, he handles himself with class on and off the ice.

The 17-year-old Sarnia Sting goaltender has been named to the OHL's all-scholastic team — a 20-player list comprised of one nominee from each team for the Bobby Smith Trophy, recognizing a combination of academic achievement and excellence on the ice. Cole Perfitti of the Saginaw Spirit was this year's winner for the 2019-20 season, unfinished due to the COVID-19 pandemic.

Former North Bay Trapper Gaudreau has collected plenty of on-ice hardware during his career but says the scholastic award "means a lot for my family, as both my mom and dad focus highly on schooling. To achieve this, it is definitely an honour."

Set to enter grade 12 this fall, Gaudreau says his offseason will not be spent training strictly in the gym.

"I’ll hopefully be starting with a business class soon then furthering with math throughout the summer. Then, my school year will be put together once again by Mr. Scott. The main goal is to achieve the best possible grades as a student-athlete."

Gaudreau credits academic advisor Mark Scott as someone who had a large influence on his scholastic success.

"Our team set us up with the proper people — like Mr. Scott — to allow us to advance our studies. He helped us pick our classes and helped us succeed in them."

As far as advice for young players looking to make the jump to higher levels, Gaudreau says "the key to being a successful student-athlete is time management. You have to be able to dedicate time to both the sport and your schooling."

The seventh overall pick in the 2019 OHL Priority Selection, Gaudreau shook off some early injury issues to finish 10-13-1-1 in 28 games with the rebuilding Sting.

"This year being my NHL draft year I am really going to be focusing on that," says Gaudreau. "I will be looking for pure development on and off the ice to be the best goalie I can be. I have a training plan set in place and I am currently trying to put on muscle and get stronger."

But, Gaudreau promises his studies will not suffer.

"I believe it’s just as important no matter where my hockey career takes me. The OHL and CHL have put lots of emphasis on how important education really is in life after hockey."