'It is always amazing to win, but to win an international tournament with the Swedish national team is even so much better'
Feb 11, 2020 2:00 PM By: Chris Dawson 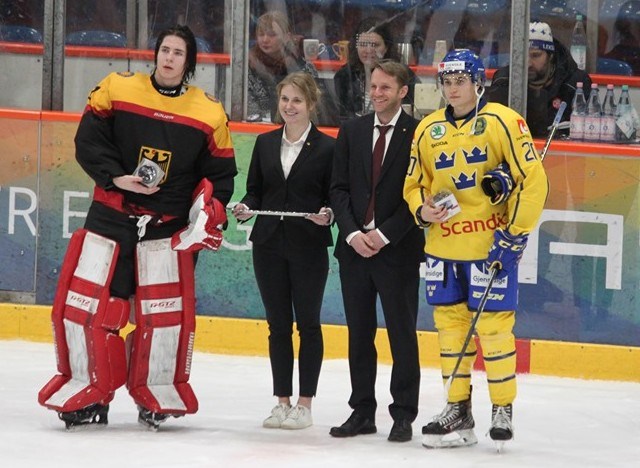 Lucas Edmonds is hoping his performance at the U19 Five Nation's Cup will give him the opportunity to play back in Canada at next year's World Junior Hockey Championship which will take place in Edmonton and Red Deer at Christmas.

The North Bay native, who is playing for the Vaxjo Lakers HC J20 team, finished with two goals and two assists for team Sweden in four games at the international tournament which included U19 teams from Germany, Switzerland, Finland, and the Czech Republic.

With a 3-1 record, Sweden finished in the top spot at the event which wrapped up last week in Berlin, Germany.

"It is always amazing to win, but to win an international tournament with the Swedish national team is even so much better," said Edmonds, who is a dual citizen.

"It was my goal and something that I had been working towards since the offseason, to make the team for this tournament and to hopefully be with them all the way to the World Juniors in Red Deer, Alberta."

Edmonds was named the Swedish player of the game in a 6-4 win over Germany where he scored the game-winner along with an empty-netter to secure the win.  However, he says the highlight of the week was the clash with the rival Finns.

"My highlight was winning the tournament of course but also when we beat team Finland because they are always a tough team to play against," he recalled.

"I also felt that I contributed offensively to the team which is what they asked me to do."

Edmonds, who plays both left and right-wing, has put up 16 goals along with 22 assists for 38 points in 31 games with the Vaxjo Lakers HC J20 team in Sweden. He has also been called up to a game with the SHL pro team this season.

Edmonds, whose father Randy coached professionally in Sweden, hopes he made a good impression in his debut with Sweden's national junior team.

"The first thing I had to do was to have a good tournament which I felt I did," said the 19-year-old who played minor hockey in East Nipissing and North Bay.

"And then in the future to just continue improving my game, performing in my club team, and by always working hard towards my goal."