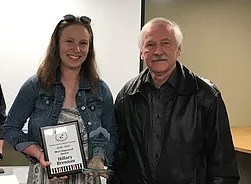 Brennan, who is from London, and is going to school in North Bay, is entering her third season as an Official in the NOHA, and is a Level 3 Official, Refereeing and Lining as high as Midget AAA.

The Kenneth R. Stiles Memorial Scholarship was established by “Project 75” and Hockey Canada in recognition of Ken Stiles and his tremendous contribution to grassroots hockey in Canada.

Through the vision and leadership of Project 75, many Hockey Canada development programs have received their start.

Project 75 is committed to providing Canadian student athletes and officials with access to financial resources to support their pursuit of post secondary education.

Ken Stiles was a big part of the Project 75 organization for many years and was a catalyst in planning and designing an initiative aimed at providing players and officials who demonstrate excellence in sport and commitment to education, access to a unique scholarship program.