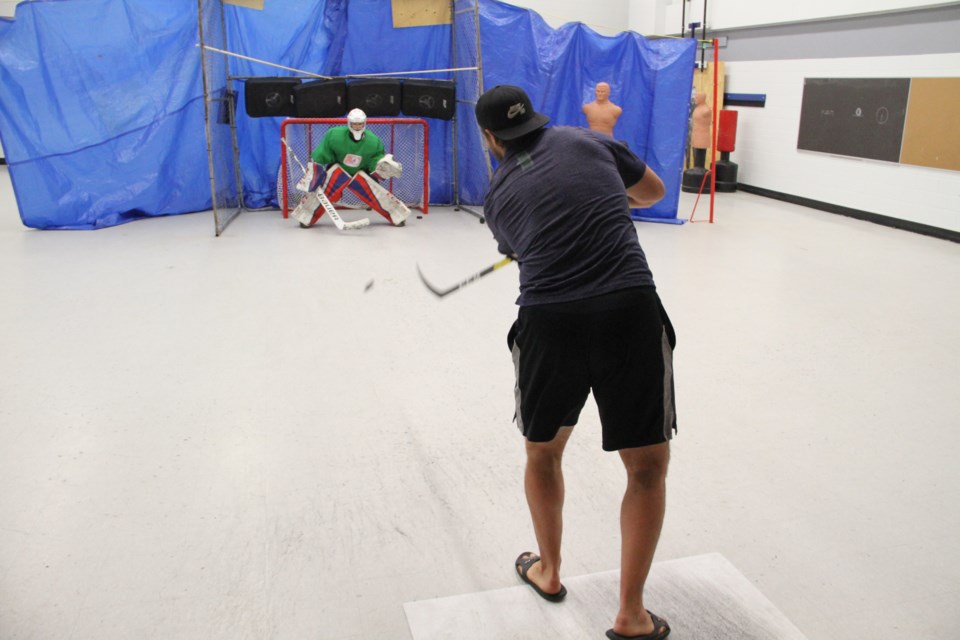 Todd Robillard has been training goalies for well over a decade.

In all his years of training goaltenders during the off-season, he has never trained goalies like he has this summer.

Instead of a typical summer day on the ice at Pete Palangio arena, Robillard's new goalie hub has taken him to a remote gymnasium in the outskirts of North Bay.

"It is strange for sure, we are working in a gymnasium," said Robillard.

"Most of our goalies are on rollerblades or work boots. We have some elite shooters out as well which is really nice."

A total of four goalies have been training with Robillard three times a week for the past two months. Those taking part include professional netminder Ken Appleby, Cornell Big Red (NCAA) goalie Nate McDonald, Sarnia Sting goalie Ben Gaudreau, and former Trappers goalie Owen Wray who signed with the Powassan Voodoos this off-season.

"We do hand drills, we do stick rotations a lot of tracking the puck, a lot of visual attachment, working through a screen, working on down low shots, hands in tight, and body saves drills," explained Robillard.

"They are getting a pretty good repetition and variety of drills considering where we are and what is going on."

Ben Gaudreau, who was supposed to attend a Under-18 Team Canada camp this summer, which turned into a handful of virtual Hockey Canada meetings, the training has been beneficial.

"One of the things I wanted to work on this off-season is to focus my hands so this is almost a perfect setting for it," said Gaudreau, a 2019 OHL first-round selection of the Sarnia Sting.

"Just working on my hands and my tracking, what I can work in here, it has definitely improved. Most of the training we are stationary as it is pretty hard to move around on boots of rollerblades. It is more about hands and getting the mechanics down."

See related: Appleby preparing for a season full of unkowns

Ken Appleby is coming off a one-year AHL contract with the Milwaukee Admirals; the affiliate team of the Nashville Predators.  He's enjoyed the work while mentoring some of the younger goalies.

"It has been very different but I mean in times like this just like everyone else you have to adapt and find different ways to go about life," said Appleby, who played 42 games last year with the Admirals farm club, the ECHL's Florida Everblades.

"It has been really amazing and a really good atmosphere with really good players to be around including really good goalies and you learn a lot from them," said the 17-year-old.

"It has been really great to do this instead of just sitting around on the couch or working out.  It is a great way to stay in touch with the game really."

Robillard is looking forward to returning to the ice for training in August.

He believes this unique training regiment helped bring a sense of normalcy to the goaltenders during this very abnormal times.

"I think that is as important to them as pucks right now," said the longtime local goalie.

"You have to adapt in terms of what you can do. Obviously they are very limited mobility wise which is the biggest part of today's hockey game. I think with them just seeing pucks, tracking and working on visual attachment - projecting the puck through screens - will benefit them later on."