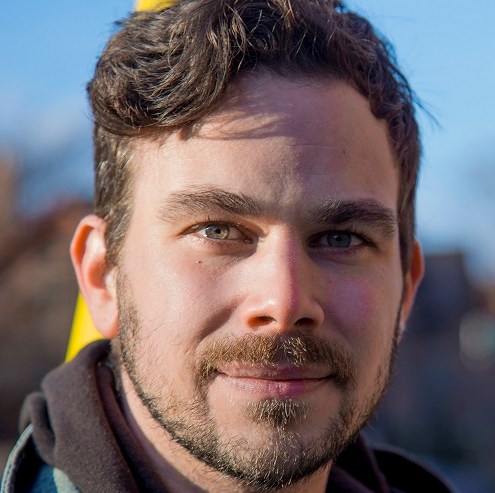 The now Toronto-based author and artist is finding success in the literary world as his LGBTQ+-themed spec fiction novel The Cypher climbed onto the Amazon best sellers list following its October 4 release. Publisher Renaissance Press touts The Cypher as the "first Queer Canadian Steampunk Fantasy novel to debut in this position."

Thinking back on his personal experiences, McLean shares coming out as queer was a gradual and sometimes daunting process for him, especially as the son of a pastor.

"When you come out — you actually don't come out once," he says. "You come out many times throughout your life. You come out to everyone you ever meet forever."

The unconditional acceptance of the close friend McLean first confided in made the next steps easier.

"You never forget the first time the words fall out of your mouth and for me, it was calling my best friend at the time and telling her expecting everything to change — but nothing did," he recalls. "She accepted it and it was just a part of who I was going forward. From there it gave me the strength to slowly come out to classmates and friends."

It was a different story with his family as McLean says he stayed closeted with them for years. It took putting some physical distance between them to finally summon the courage to tell them.

"I knew that they knew about me and I had to tell them it wasn't something about me that I was going to change, or that I wanted to change," McLean observes.

From his home in Toronto, he says still has a soft spot for home. Even though he left North Bay in 2012 to try his hand at being an artist, he says "there isn't a day that does by where I don't think on what's back in North Bay."

McLean proudly and openly embraces who he is and who he has become as a person, author and artist. The Cypher is his second published novel and the first in his Avaria series.

The Cypher follows the story of Penner whose partner, Chess, receives messages from a divine source that forces the two men to flee to find out the truths behind their universe. Joining forces with an enigmatic actress named Raina, and a boisterous sky pirate named Fred, they set off to find out why Chess has been targeted by these spiritual forces and what they need to do to survive.

"The great thing about LGBTQ+ content right now is that it's no longer telling the same stories that it always has," says McLean. "In the past, these characters and stories have been restricted to coming out stories about that's very limiting to not only the writers but the readers."

McLean adds his work can be enjoyed by anyone, that it need not be pigeonholed into certain classifications based on sexual identity. In fact, he has learned the largest audience for his story so far has been heterosexual women who gravitate toward the romance aspects of it.

"Just because some of my characters are queer doesn't mean that this is a gay story. This is a story about love and what happens when something you can't explain impacts your loved one and how you learn to cope and deal with it," he says.

Each digital and hard copy of the book includes hundreds of puzzles and codes that seek to "deepen the experience," according to McLean. These codes he designed are meant to "enhance the understandings of the events and offer different perspectives on the universe."

And, while it took five years to complete The Cypher, McLean says fans won't have to wait nearly as long for additions to his expanding world of Avaria.

"There are currently three other books that take place within this world that I'm hoping to publish soon, but all are stories that occur independently of each other so you don't need to read the previous stories," says McLean.

All are destined to be mixed and recorded as audiobooks and McLean has also played a central role in voicing and releasing The Cypher as a podcast with a new chapter released Tuesday and Thursday through all major podcast sources and featuring the voice talents of Canadian actors Owen Fawcett, Shawn Erker, Nicole D’Amato and Cassandra Watsham.

"This isn't so much a traditional 'gay' story as it is about love, loss and the impacts that we have on each other. All of that just so happens to take place in a world with airships and sky pirates," adds McLean.

Update: Winner! Local filmmaker debuts at Ontario International Film Festival
Oct 25, 2020 9:30 PM
Comments
We welcome your feedback and encourage you to share your thoughts. We ask that you be respectful of others and their points of view, refrain from personal attacks and stay on topic. To learn about our commenting policies and how we moderate, please read our Community Guidelines.