Lakers bringing in a new wave of hockey talent up front 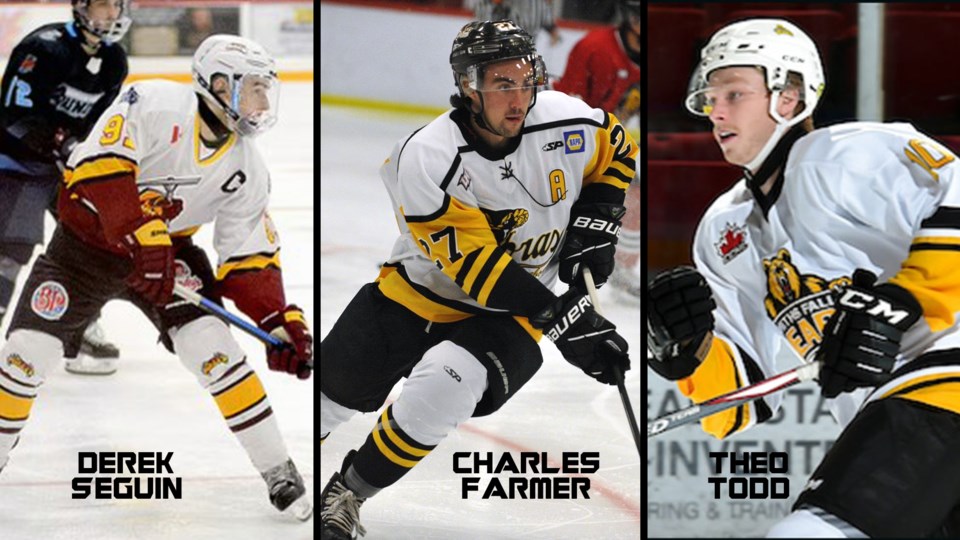 Photo courtesy Lakers Athletics.
The Nipissing Lakers men’s hockey team has bolstered their depth up front, bringing in a trio of new forwards for the upcoming season.

The Lakers have signed Derek Seguin, Charles Farmer and Theo Todd – all of whom have northern Ontario connections.

Seguin is making his way to the Lakers after wrapping up a strong junior career in the NOJHL with the Timmins Rock, while both Farmer and Todd are coming to Nipissing from the Laurentian Voyageurs, who unfortunately folded recently.

In Seguin, a former Hamilton Bulldogs pick, the Lakers are getting a veteran of 160 games in the NOJHL, all with the Rock, where he piled up 95 goals, 87 assists and 182 points, along with 153 penalty minutes.

He also posted 27 points in 22 playoff games during his four-year junior career.

“I am a two-way forward, my strength is my play in the corners and along the boards. My expectations for myself this year is to come in and learn as much as I can, new step means a new opportunity to prove myself to my team and the coaching staff,” Seguin said.

The native of South Porcupine, ON has been the captain of the Rock the past three seasons, adding leadership to his offensive prowess.

He was also a first-team all-star, top defensive forward and suited up for the CJHL Top Prospects game in 2018.

“I chose Nipissing because of the reputation it has built for developing players and for the overall satisfaction of their experiences – through contacting former players and current ones,” Seguin explained.

Seguin is enrolled in the psychology program when school begins in the fall and is looking forward to both the athletic and academic aspects of university.

“Derek joins us after a number of strong years with Timmins. A gritty player with a very good attitude will be a welcome addition,” Mike McParland, Lakers head coach added.

Charles Farmer is a skilled forward who is coming off a big offensive season with the Terrebonne Cobras, where he posted 86 points in just 48 games – including 35 goals and 51 assists.

In total, he accumulated 59 goals and 99 assists, good for 158 points in just 93 games during his career in the QJHL.

Farmer also suited up for 12 games with the Val-d’Or Foreurs of the QMJHL.

“I consider myself a good skater, really strong on the puck, offensive forward who can also play a good defensive game. My biggest strength is my hockey IQ,” Farmer said.

“I think we have a good young team. My expectations for our team is to have a super competitive identity and be a tough team to play against.”

Calling Blainville, QC his hometown, Farmer is excited to get a second chance at playing in the OUA and suiting up for the Lakers.

“Unfortunately, I had to transfer from Laurentian because our hockey program shut down, but I chose Nipissing because I like the mentality here and I think we're heading in the right direction to have success,” he said, adding he’ll be enrolling in the psychology program. “Also, I think the campus and our facilities are pretty nice and it will be a good fit for me.”

In the same situation as Farmer, Theo Todd was planning on suiting up for the Voyageurs in the fall but had to change his plans and the Lakers end up being the benefactor.

Todd will join the Lakers after parts of four seasons in the CCHL with the Smith Falls Bears and a short stint with the Brockville Braves.

“My expectations for myself have always been high. I’m always trying to set new goals and by having this opportunity, it will test my abilities in a new league,” the forward said.

“As for the team, coach McParland has spoken very highly of their drive and competitive nature as a team. I think this will work in my favour as a hockey player and I look forward to the road ahead, pushing to win a championship while working to graduate to the next leave of hockey.”

Originally from Kemptville, ON, Todd will be taking business when school begins in September.

Todd is confident his style will translate into success both for himself and the team when he hits the ice with his new teammates.

“My strengths are my vision and speed and I consider myself a playmaker,” Todd explained.

“I chose Nipissing for a wide variety of reasons – from the academics to their campus, all revolving around their stupendous hockey program they have carved from future years. I am extremely grateful for this opportunity and look forward to starting things up.”

Lakers head coach Mike McParland believes these three players will add much-needed depth to the program, giving his lineup some strong options heading into next season.

“We had a number of players reach out to us from Laurentian and knew how disappointing it was for them that their program was cancelled. We wanted to help out and give these student-athletes an opportunity to live the experience at University,” McParland said.

“Both Theo and Charles bring elements we believe will help our team. Theo is a player that brings speed and tenacity as well as offensive potential. Charles has the attributes and skill level to be a scorer. We welcome them both.