'My expectations for myself are to further develop myself as a student and a hockey player as well as helping my team win a championship'
Apr 11, 2021 12:00 PM By: Chris Dawson 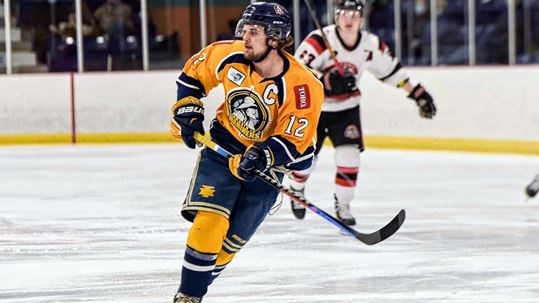 The Nipissing Lakers men's hockey team has added an offensive punch to their lineup with the team's latest recruit.

The Lakers have added forward and Aldergrove, B.C. native, Jonathan Rees, who will join the program for the 2021-22 OUA/USports season.

Rees is coming off a successful junior career, where he piled up points in the PJHL and Maritime Junior 'A' Hockey League, where he is currently wrapping up his time with the Yarmouth Mariners.

"Having the opportunity to gain an education and continue to play hockey at a great school and experience something new away from home is something I'm really excited for," Rees said in a release.

Lakers head coach Mike McParland likes what Rees can bring to his team's lineup and is excited to add him to the mix of forwards that will suit up next season.

"Jonathan has been a solid point producer on the east coast with Yarmouth in the Maritimes League and we're hoping he can bring that to our team," McParland said.

"We would like to score more and we believe Jonathan can help with that. We're looking forward to having him on campus and part of our program."

He also added 149 penalty minutes in that time.

Prior to his time in Yarmouth, he scored 33 goals, 55 assists and 88 points in 66 games with the Delta Ice Hawks.

Rees, who is planning to enroll in Business at Nipissing, feels he can contribute at both ends of the ice.

"I'm a solid two-way forward with good playmaking abilities and strong on face-offs," he explained. "I take a lot of pride in being able to play in the D-zone as well as being able to create scoring chances in the other team's end."

In 2018 with the Ice Hawks, Rees was part of a PJHL championship team and was named rookie of the year.

He also earned a league title with the Mariners in 2019.

Coming off personal and team success, Rees wants to bring a title to Nipissing and will contribute in any way he can.

"My expectations for myself are to further develop myself as a student and a hockey player as well as helping my team win a championship," Rees stated.

The Lakers like all other USport hockey programs, did not compete during the 2020-21 season due to the COVID-19 pandemic.