The Northern Ontario company had been struggling to turn a profit but Cacoilo was convinced he could transform the organization into a thriving business.
Aug 19, 2016 4:16 PM By: Jeff Turl 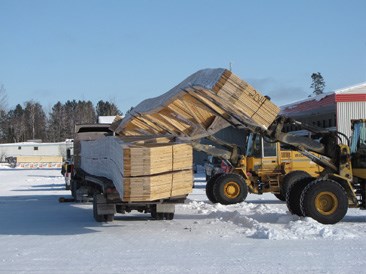 Reports today are indicating that the biggest employer in Sundridge, Kent Trusses, has shut down.

Sundridge is a 40 minute drive south of North Bay and has a population of about 1,000.

An email from the company General Manager Chuck Melanson to BayToday said only that, "We are experiencing a temporary production shutdown and will have an update for customers no later than Monday, August 29th."

Some employees have almost 40 years working for the company.

All calls have been directed to a voicemail.

Mayor Lyle Hall says he's heard the rumours but has received nothing official from the company.

He says, however, the Central Almaguin Economic Development Association has been working with Kent on a business retention plan trying to help them out with a few of their problems.

"We haven't received anything official from them. I don't want to speculate but I'm really hoping for the best because this could be quite a body blow to the community. The whole social and economic fabric would be affected. It would be a shame. We're hoping for the best."

This would be the busiest time of year for the company, and people in the town are saying Kent has been unable to buy the lumber to build trusses.

According to the company website, "Kent Trusses utilizes state of the art computer engineering software to design custom components for the construction industry. Each individual component ( for example: a roof truss, a floor joist or a wall panel) is custom engineered to the individual specifications & tolerances for the specific application."

The government supported FedNor website says the company has struggled financially before.

"The winter of 2010 was a watershed moment for Julio Cacoilo, president, as he realized his dream of acquiring Kent Trusses Limited, a building product manufacturer located in the Sundridge area. Until then, the Northern Ontario company had been struggling to turn a profit but Cacoilo was convinced he could transform the organization into a thriving business, while continuing its legacy of quality products and superior service.

"At the time of purchase, Kent Trusses employed 88 full-time staff and occupied 30,000 square feet of manufacturing space. Fast forward three years and the results of Cacoilo’s efforts and his team at Kent Trusses are unmistakable. The company now employs more than 110 full-time staff and has grown its operations to nearly 65,000 square feet with locations in both Sundridge and Providence Bay."

This story will be updated as details become available.

Opinion: King St. resident feels wrath of project manager 'for writing a letter to the editor and voicing my concerns to City Hall'
Dec 5, 2020 12:00 PM

At least no ticket?
Dec 5, 2020 9:00 AM
Comments
We welcome your feedback and encourage you to share your thoughts. We ask that you be respectful of others and their points of view, refrain from personal attacks and stay on topic. To learn about our commenting policies and how we moderate, please read our Community Guidelines.