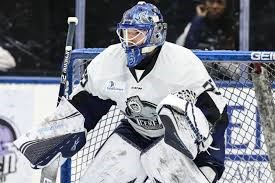 Ken Appleby with the Jacksonville Icemen of the ECHL last year. FIle photo.

Ken Appleby is no longer a free agent.

The big North Bay goalie signed an AHL contract with the Milwaukee Admirals, the club announced on Tuesday.

Appleby told BayToday he and his agent had a deal in place around July 1. He says he will be fighting with recently acquired netminder Connor Ingram for the backup position with the Admirals playing behind incumbent Troy Grosenick.  The Admirals are the affiliate team of the Nashville Predators.

He says the Preds affiliate team was on him early when they found out he was not getting a new contract offer from the Manitoba Moose for the upcoming season.

"It was done right away and I do not have to worry about that anymore," Appleby said.

Appleby says the Admirals were an appealing destination due to their goalie coaches (in the Preds system) which include former OHL goalie coach Ben Vanderklok.

"They have their head guy who I will be working with this summer and obviously at main camp and it is important to have that (goalie coaches) at that level especially when you are still young and trying to develop a little bit."

The former Trappers goalie has three games on NHL experience with the New Jersey Devils, stopping 49 of the 52 shots he faced in the course of three games in 2017-18. In 76 AHL contests with the Moose, Binghamton Devils, and Albany Devils he has accumulated a 32-36-5 mark with a 2.82 GAA, a .900 save % and four shutouts.

The Admirals have another North Bay connection to as head coach Karl Taylor happens to be from North Bay too.