Nest protection programs are underway by biologists across the province, to increase the survival of the eggs, and hatchlings
Jul 4, 2020 9:00 AM By: Jamie Mountain 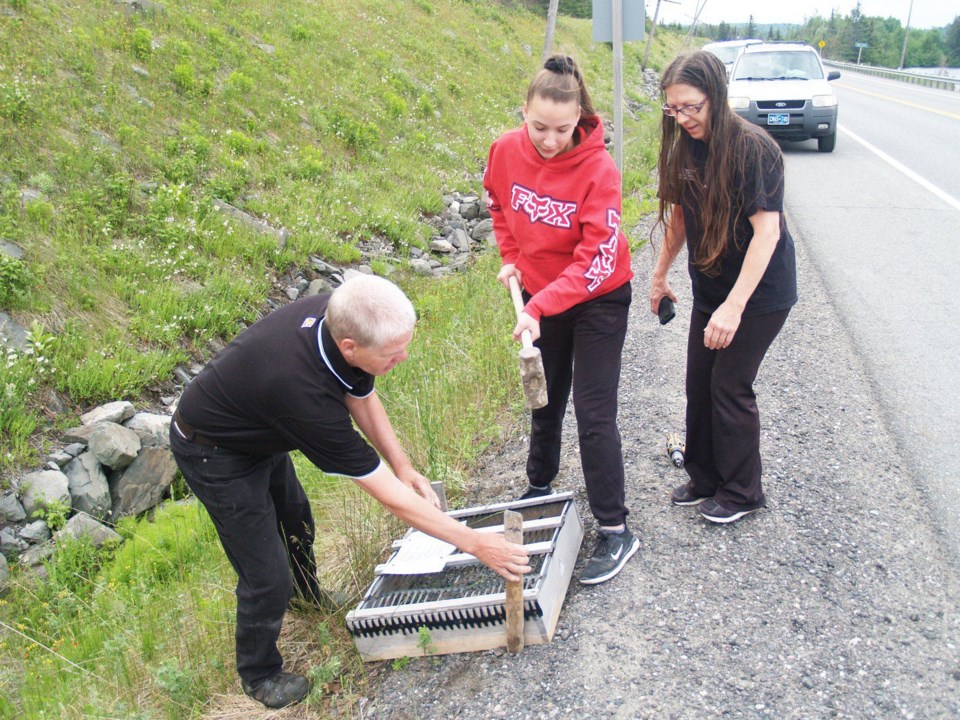 Peter Gilboe (left), Janna Popkie and Roxanne St. Germain all helped to install a turtle nesting box off the side of Highway 11 just south of Latchford. Photo by Jamie Mountain/Local Journalism Initiative.

LATCHFORD, ON  – Female turtles in Ontario travel the most in the month of June as it is a prime time for laying their eggs.

But, unfortunately, the turtles don’t always choose the most ideal locations, leaving their unborn babies susceptible to predators and other dangers.

Roxanne St. Germain and Jenna Popkie of Animals First-Temiskaming Shores & Area and former conservation officer Peter Gilboe, with the support of the Ontario Ministry of Transportation (MTO) and IMOS, felt it a priority to protect nesting turtles in that area and installed a turtle nesting box next to the highway on the morning of June 26.

Gilboe, a distinguished conservation officer who recently retired, explained that a construction company last year had found some nesting turtles on Highway 558, which runs west of Mowat Landing from Haileybury, and called him when he was still a conservation officer.

“So they made up the (nesting) boxes and we put them on. When Roxanne called me about this one, I kept the boxes (from) last year and just stored them and they’re still stored at the MNR spot,” Gilboe explained in an interview.

“I retired in the spring but I’m still kind of the MNR guy. So when Roxanne gave me a call, I said ‘Yeah! I got boxes.’ So then we got hold of IMOS, the highway maintenance people for Miller (Paving), and they got us the authority through the MTO to put this here on the highway.”

As a final step, Gilboe said that he then would be plugging the coordinates of the nesting site near Latchford into a GPS and that they would “put turtle crossing signs coming into Latchford and down at the corner here by the stretch of lake.”

Nest protection programs are underway by biologists across the province, to increase the survival of the eggs, and hatchlings. It is not legal to disturb or interfere with a natural nest in any way, without the appropriate permits through the Ministry of Natural Resources and Forestry (MNRF).

However, the MNRF does allow nest protection on private property, carried out by the property owner.

Also, it is crucially important that the hatchlings have access to leave as they can succumb very quickly without a properly-sized escape route.

The easiest device to use involves wide mesh wire, raised above the nest, to allow movement of hatchlings, and that is secured adequately into the ground to prevent predators from digging it up.

Both male and female turtles travel, with both being equally vulnerable to road mortality.

Females travel the most in June, looking for appropriate sites to lay their eggs, and they often travel long distances to find them.

Each species has their own preference and preferred time for laying eggs which involves the female digging a hole (very slowly, in true turtle style) and depositing their eggs, before then covering them up.

There is no parental care of the eggs beyond this and the hatchlings are on their own to find their way to the water.

Turtle eggs also act as food for many wild species and less than one per cent ever makes it into the population.

While populations can sustain this loss of eggs and hatchlings when no other unnatural threats are placed on them, all of the Ontario species are now considered species at risk, due to the many human-related threats.

As a result, the turtles need all the help they can get to attempt to offset this.

Many conservation initiatives are underway across the province, to help tip the balance back and allow populations to survive.