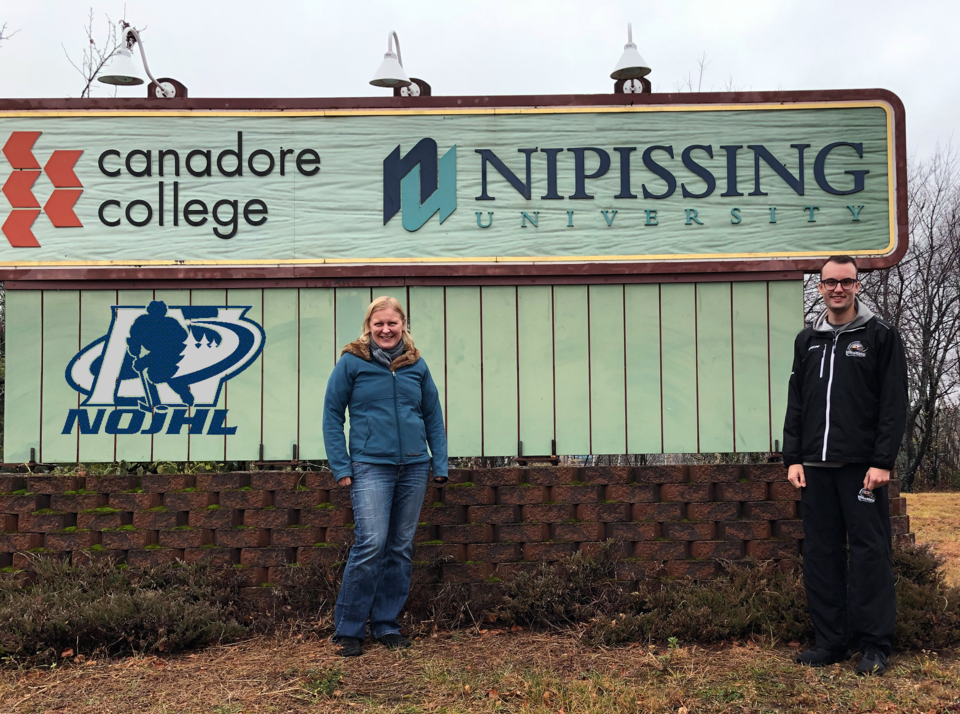 Photo submitted.
As a head trainer and equipment manager of the Northern Ontario Junior Hockey League’s Powassan Voodoos, J.J. Johnson is also actively continuing his education, with a project focused on player safety.

In pursuit of his Master of Science in Kinesiology Degree from Nipissing University, Johnson is presently heading up a project where researchers at the North Bay, Ont.-based school are conducting a study investigating mouthguard and throat protector compliance of Junior 'A' hockey players in northern Ontario.

Under the supervision of Dr. Kristina Karvinen, who is an associate professor in the Faculty of Education & Professional Studies as well as the Schulich School of Education and Physical and Health Education at Nipissing U., this hockey-related research study is a first of its kind offered by the university, as it relates to the involvement of players from the NOJHL.

With that, skaters who competed in the NOJHL during the 2019-2020 season are being invited to participate in this study.

This group consists of those players who were at least 16 years of age, (either a forward or defenceman) and who was a full-time rostered player on any of the 12 member teams in the NOJHL during the 2019-2020 campaign.

The research involves participating in an online survey that takes approximately 15-20 minutes to complete.

As an offer of gratitude for participating, all respondents will be given the option to enter a draw to win one of three $50 Amazon.ca gift cards.

"Pursuing a master's degree has always been a goal of mine and given my career in hockey, a research study of this nature made perfect sense,” offered Johnson in a release.

“I feel as though many players around the league on different teams know me and who I am, so I'm interested in seeing what they have to offer when it comes to this project,” added the Powassan staff member who also served as equipment manager on Team Canada East that won a silver medal at the 2019 World Junior A Challenge in Dawson Creek, B.C.

This project coincides with a school and athletic department that sees Nipissing offer both men’s and women’s hockey, who compete in the OUA and U SPORTS.

"This is the first research study I have been a part of that involves ice hockey players as participants,” stated Dr. Karvinen.

“While this entire project has been an opportunity for me to learn more about hockey, I know that J.J.'s passion for the game and love of his career will make this study a remarkable success".

Last season saw over 250 skaters compete in the NOJHL, so input provided by league skaters from 2019-20 for this project can be a tremendous resource.

“As an elite athletic trainer and equipment manager in our league, as well as in the entire Canadian Junior Hockey League, J.J. continues to strive in elevating player safety and development,” stated NOJHL Commissioner Robert Mazzuca.

“This research study is just another example of his dedication as we all strive for the betterment of the game,” added Mazzuca. “We encourage every available player to take part in this survey.”

While the research is important, Johnson is also pleased that anyone taking part will have a chance to claim a prize for their involvement as well.

“I think the nice thing for participants is the opportunity they have to win one of those $50 Amazon gift cards.”