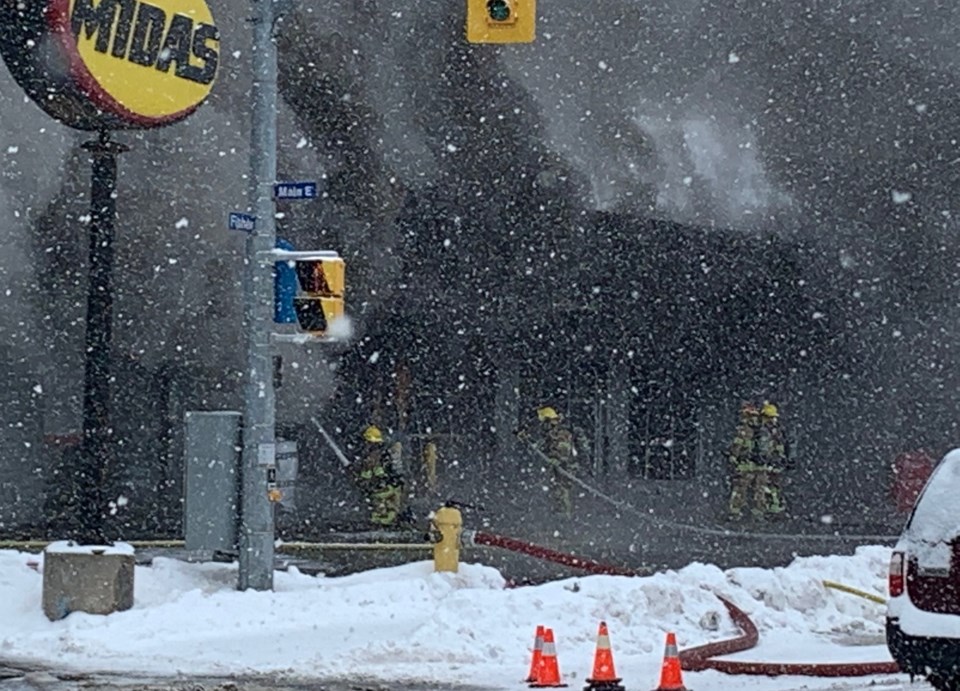 A mid-morning fire has destroyed the Midas Muffler shop at the corner of Main and Fisher. Chris Dawson/BayToday.

The owner of the Midas Muffler shop engulfed by fire this morning says there was a "boom" seconds before flames broke out.

Patsy Oneil told reporters, her husband and son were working on a car and let the gas tank down to put a pump in it.

"Our whole life is in there," she said of the business the couple has owned for 12 years.

Oneil says her husband and son got out with some burns and were taken to hospital and are ok.

"They were doing their job like always. What we do every day. We come to work at 7:30 and we start working on cars. Unfortunately, there was an accident and it took the whole business down in seconds. Twelve years we were in there," Oneil said between sobs. "The building is fully insured, thank God for that. Is money going to bring this all back? No"

"Obviously it's a motor vehicle repair shop so we have acetylene tanks inside the building, oil and fuel storage, lubricants, and stuff like that. That's why the fire really took off on us. We had visible heavy black smoke right from the fire station so immediately when we got on the scene we were dealing with two injuries and we went into a defensive attack mode. We weren't putting people in that building.

"You can't get in and get a good view because of the thick black smoke and with all the hydrocarbons we can't see exactly where things are. We can't get in to get water directly where the dangers are. We've heard tires popping in there. and cans letting go. It's just a major fire and is now in the false ceiling so we're trying to get on top of that."

Whiteley says these types of fires can be very hard to battle.

"Especially with the hydrocarbons contained in a motor vehicle repair shop like this, it's extremely dangerous and the fire can really take off on us."

Fire crews contained the blaze to just the Midas building.

Whiteley says he believes the fire started as a vehicle was being worked on and "spread very quickly" but can't speculate on a cause until he has more details.

Reopening levels in neighbouring juristictions and local variants of concern kept us in lockdown: Dr. Chirico
Mar 8, 2021 10:52 AM