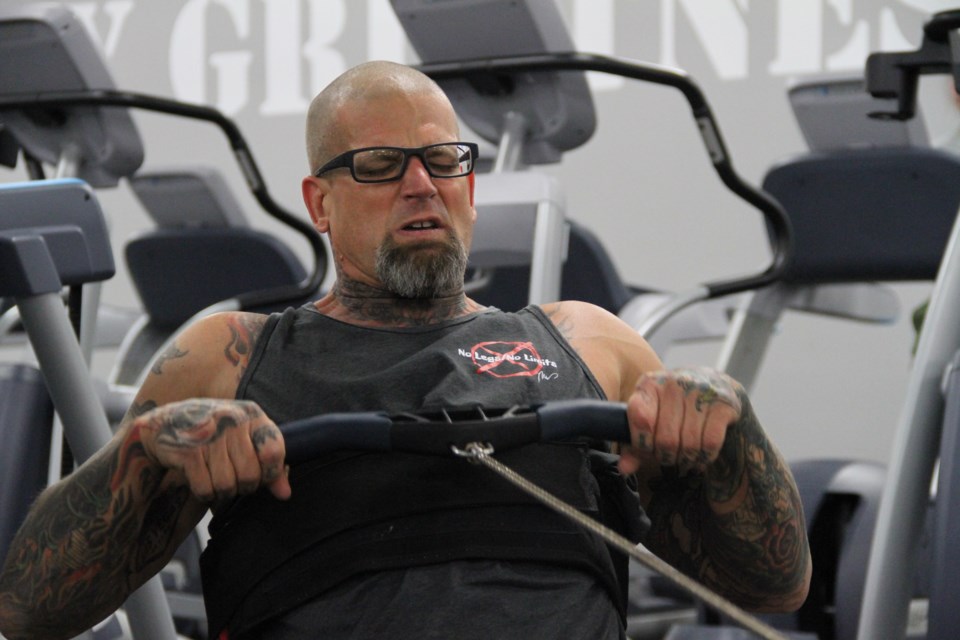 Dave Innes rows hard while competing in a virtual race this afternoon at World Gym. Photo by Chris Dawson/BayToday.ca.

Dave Innes was exhausted but he was excited when he realized he beat his personal best time by six seconds this afternoon.

The Invictus Games silver medallist in one-minute rowing was competing in the Concept 2 World Sprints event which was hosted by World Gym in North Bay this afternoon.

“I feel good,” Innes said trying to catch his breath after the competition.

The 47-year-old, was paralyzed from the chest down due to an accident at CFB Gagetown more than 25 years ago.

It is the first competition since he won silver at the Invictus Games in Australia last fall.

“The energy at Invictus is insane,” said Innes recalling the Invictus experience.

“To be there the energy is unbelievable. Just being in a gym environment it helps, I used to row at home in a basement and that was horrible.”

Innes is hoping to use this event as a springboard to his next goal which is to compete for Canada at the 2020 Paralympic games in Tokyo.

He’s planning to train in Ottawa on the water with another Invictus Game medallist in late May.

Before that, Innes will receive the Jack Burrows Memorial Award for Sports Achievement, at the North Bay Sports Hall of Fame Dinner on May 4th.

Innes has also started his own line of clothing, called “No Legs, No Limits” to help offset the costs of training and potential travel to the Paralympics.

Pickleball gaining more momentum during pandemic
Jul 16, 2020 10:00 AM
Comments
We welcome your feedback and encourage you to share your thoughts. We ask that you be respectful of others and their points of view, refrain from personal attacks and stay on topic. To learn about our commenting policies and how we moderate, please read our Community Guidelines.