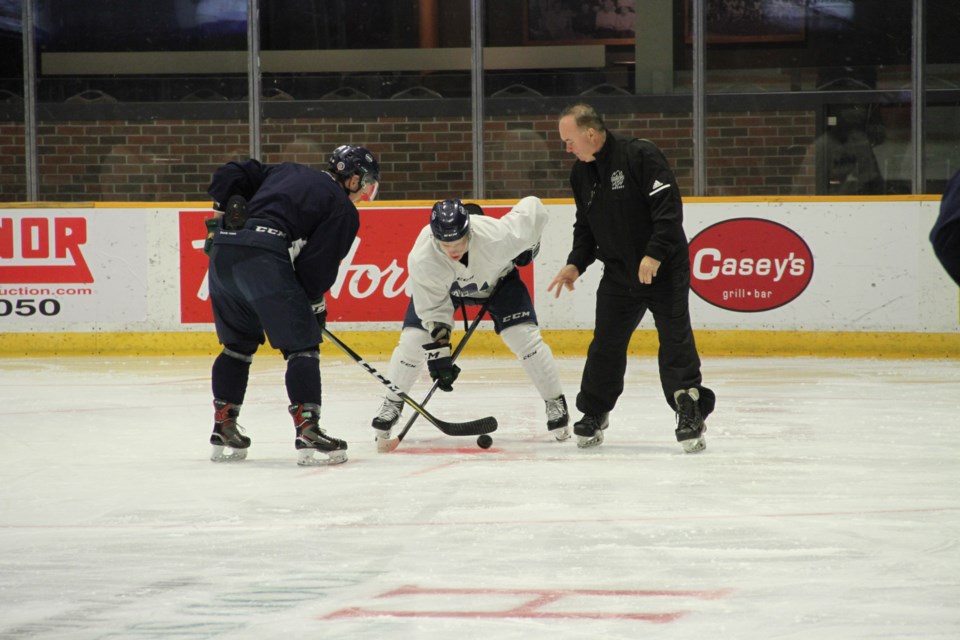 The Lakers during practice earlier this season. File photo by Chris Dawson/BayToday.

Mike McParland says he always has people asking him how he is able to manage to carry a 27-man roster every season with the Nipissing Lakers varsity men’s hockey team.

“The problem with university hockey is if somebody gets hurt and you don’t have extra guys, you have nowhere to get guys from,” said McParland.

No, there is not affiliate squad for the Lakers to call players up from. While that 27-man roster usually is a comfortable number, for the Lakers this year it is not enough.

McParland was forced to dress under the 20-man roster limit for their game on Wednesday where they fell 3-2 at home to the Ryerson Rams in a shootout.

He was forced to do that because the Lakers are facing an unprecedented slew of injuries which has put literally 10 players on the shelf.

“To see 10 injuries at one time, I have never experienced that in anything like this,” admitted a frustrated McParland.

“With the exception of two of them, eight injuries are severe injuries. We have four separated shoulders, we have one undetermined possible broken wrist, we have mono, we have a broken foot, we have a concussion and then two severe groin strains.”

Those injuries have arrived in bunches, including three during an exhibition game in New York against Cornell in late October and then three more injuries in a 5-4 loss against York on November 1 which included three shoulder separations including one hit on Matt Paul which is still under league review.

However, McParland is impressed by the effort he has had from his healthy players.

“Most of our injuries are not four or five days, we are looking at four or five weeks for most of them and some of them even longer. If we can get by these next few weeks and still manage to get points and get everybody back, especially with the confidence the guys got at the start of the year in the exhibition season when everybody was healthy, I think our guys believe we have a pretty good team.”

The Lakers have the weekend off to recover but they are back on the ice on Tuesday night at Memorial Gardens as they take on York.