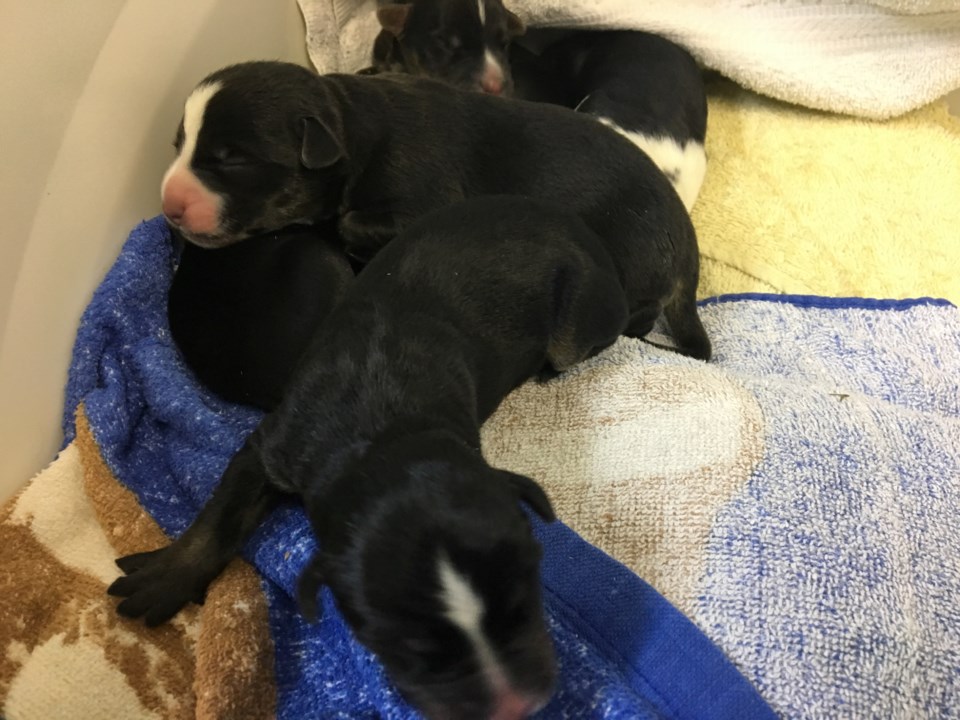 Janet Bredin admits she was startled yesterday when literally 11 day-old puppies without a Mother, was dropped off at the North Bay and District Humane Society on Monday afternoon.

Bredin, who is the Shelter Manager at the local facility, says they normally do not see puppies abandoned like this very often.

“A lot of people in the community will use them as a source of income for breeding facilities and things like that,” she said.

“Very, very rarely do we see puppies abandoned like that and especially without mom.”

Bredin says the individual who found the puppies, told the Humane Society they were discovered near McGibbon Street in North Bay. In fact, she says the puppies are so young that if they were brought in a few hours later, some may have died.

“For us we had to act very quickly getting these puppies properly cared for immediately with formulas, bathroom breaks, things like that helping them go to the bathroom which is imperative because that is what Mom would help them do,” Bredin said, noting they cannot tell what breed the puppies are since they are so young.

The puppies are too young to adopt so the Humane Society has received help from foster families who have nursing female dogs.

“We had a number of people step up willing to open their doors to these puppies,” she said.

She says the Ministry of the Attorney General is investigating the abandoned puppies case.

“We have reached out to them to address the concerns that we have about the neglect that these puppies had faced prior to coming here so it is obviously a huge health and welfare issue for these puppies,” she said.

She hopes a situation like this will encourage any other pet owners with a dilemma such as this to realize there is a solution to the problem without abandoning the animals.

“There is absolutely no guilt or question if somebody comes to our front door to say, ‘look we simply can’t care for them,’ we would be willing to take Mom, we would have been willing to take the puppies and we have the opportunity to care for them but without mom it is so much more of a task for these puppies to succeed and thrive so if we had mom it would not even be half the story,” said Bredin.