Human trafficking billboards being put up along Highway 11 Muskoka

Billboards along Highway 11 in Muskoka will be utilized during the campaign to help spread awareness of human trafficking to passing motorists, including human trafficking victims being transported by their traffickers
Feb 22, 2021 9:00 PM By: BayToday Staff 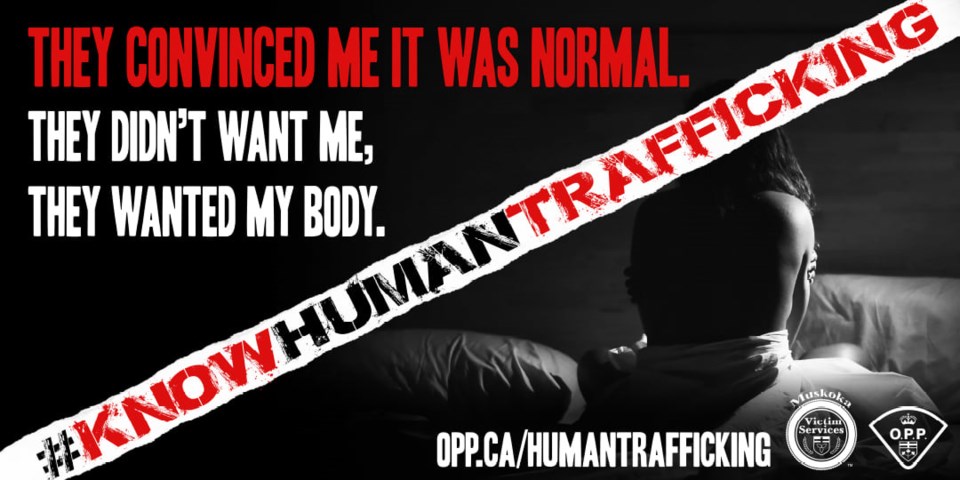 These billboards will be displayed along the highway in Muskoka. Courtesy OPP.

If you are driving back and forth along Highway 11 you might glimpse a new initiative to thwart human trafficking.

The goal of the campaign is to shine a light on human trafficking and how prevalent it is in our communities.

Traffickers use major highways to transport their victims throughout Ontario. Billboards along Highway 11 in Muskoka will be utilized during the campaign to help spread awareness of human trafficking to passing motorists, including human trafficking victims being transported by their traffickers.

It is common for victims to believe that their traffickers are helping or caring for them, and therefore, they may show their loyalty to their traffickers. This does not mean that they are not victims says an OPP release.

Human trafficking involves the recruitment, transportation or harbouring of persons for the purposes of exploitation, typically in the sex industry or for forced labour. Victims are often from extremely vulnerable populations, including migrant workers, new immigrants, Indigenous women and youth, at-risk youth and those who are socially or economically disadvantaged.

The billboards will feature comments made by human trafficking victims, highlighting how normalized they believed their situation may have been. The campaign also encourages members of the public to utilize the hashtag #KnowHumanTrafficking or visit opp.ca/humantrafficking to learn more and join the conversation.

"Our government is taking deliberate steps to put an end to human trafficking and protect victims and potential victims of this terrible crime," said Premier Doug Ford. "This tough new legislation builds on our Anti-Human Trafficking Strategy we introduced nearly a year ago, giving law enforcement additional tools to help prevent and deter human trafficking."

"Human trafficking is happening in both urban centres and small communities across Ontario," said Jill Dunlop, Associate Minister of Children and Women's Issues. "This proposed legislation further supports our cross-government approach, as well as our work with partners across jurisdictions and various sectors, to combat human trafficking. This includes providing tools to improve the ability to identify and appropriately respond to suspected instances and connect survivors to supportive services."

National Human Trafficking Awareness Day takes place on February 22 this year and helps bring awareness to the magnitude of modern-day slavery in Canada and abroad.