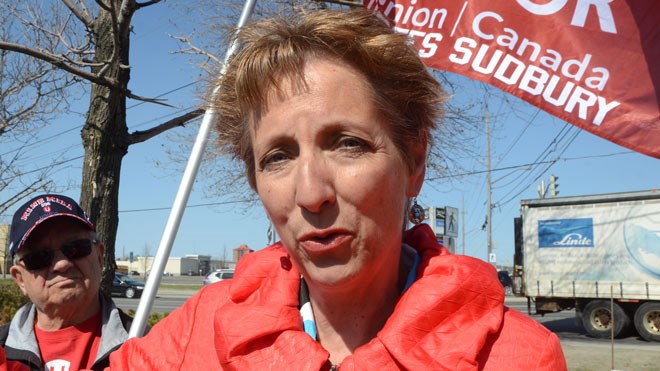 Long before France Gélinas became the NDP MPP for Nickel Belt in 2007, she was a practicing physiotherapist.

Unfortunately, she is is no stranger to being on the receiving end of health-care violence.

“I have been … hit hard enough to leave a bruise a couple of times, kicked and hit with canes and crutches,” said Gélinas, the NDP's critic for health and long-term care. “Even in my time, it was there. It's just amplified now.”

Gélinas, the former executive director of the Community Health Centre of Sudbury, said she's also spoken to many health care workers in her constituency office who have been attacked at work.

“It happens way more often than you think,” she said. “I cannot count them, but I've had many nurses come and see me — an arm in a cast, an arm in a sling. The other one had these huge bruises all over her face and side and arm.

“Physical violence is real. It happens everywhere, and that includes Health Sciences North and our long-term care homes, and every part of health care, really.”

So she was not surprised to read a Sudbury.com story last week about a patient stabbing a nurse at Health Sciences North.

According to Greater Sudbury Police, on Oct. 16, a female staff member went to check on a 62-year-old man who was a patient at the hospital's Ramsey Lake Health Centre, and when she entered the room, he was holding a wrench.

“The woman ran from the man’s room and the man ran after her,” said an email from Greater Sudbury Police spokesperson Kaitlyn Dunn. “She was able to get to safety without being injured.”

A second incident with more serious consequences involving the same man happened the next day, Oct. 17.

The patient blocked the door to his room, but staff members gained entry.

Once staff members were inside the room, the man brandished a screwdriver and stabbed one of the staff members, who received serious but non-life-threatening injuries.

The suspect has been charged by Greater Sudbury Police with two counts of assault with a weapon.

Dunn said there was a different victim in each incident.

While the first incident involving the wrench occurred on Oct. 16, it was not reported to police until Oct. 20, several days after the second incident where the worker was stabbed.

The Ontario Nurses Association confirmed with Sudbury.com that the person who was stabbed was a member of the union.

Many people who read the story asked how the patient could have gotten his hands on a wrench and a screwdriver at HSN, but Gélinas said hospitals are full of items that could be used as a weapon.

If it wasn't a wrench and a screwdriver, it would have been something else used against the workers.

“Nurses have been hit by walkers, by crutches, by canes,” she said. “You can do a lot of damage with a cane, let me tell you.”

Members of the public also wondered why the first incident was not reported to police until after a second incident occurred.

Gélinas said it's important that such incidents within health-care institutions be reported to police, but unfortunately, that doesn't always happen.

“Within the hospital sector, if you are brave enough to report it to your supervisor — who tends to reprimand people who come forward rather than help them out — it dies there,” she said.

“They do not do the next step of making a report to the police. If the person goes and reports it herself to the police — usually it's a she — there's no support there. There's no validation from their employer. Every step is made as difficult as possible.”

Gélinas has introduced a private member's bill in the legislature — the Speaking Out About Workplace Violence and Workplace Harassment Act — that would protect health care workers who speak out against violence.

Health care workers who report violence often face reprisals from their employers such as being put on less-desirable shifts, she said.

A nurse with the North Bay Regional Health Centre was even fired in 2016 after she was quoted in a CUPE news release speaking about workplace violence. An Ontario arbitrator ruled in 2018 that the nurse should get her job back.

The private member's bill amends the Occupational Health and Safety Act to prevent any penalty of any kind from being used against an employee for speaking out about violence or harassment.

Gélinas said her bill passed first and second reading this year but hasn't gotten any further.

No private member's bills have passed so far under the current Progressive Conservative government, Gélinas said, a situation she's never experienced in her 12 years in the legislature.

Gélinas' bill isn't the only private member's bill out there dealing with the issue of health-care violence.

In early 2019, Vancouver Kingsway NDP MP Don Davies introduced a private member's bill in the House of Commons amending the Criminal Code to consider assaulting a health-care sector worker an aggravating circumstance for the purposes of sentencing.

As for the cause of such incidents, Gélinas' said they partly happen because people are waiting too long for care in hospitals and long-term care homes due to understaffing.

“And they get very frustrated with that,” she said. “You are sick, you are in pain, and you lash out at the first person that comes to you. How do we fix this? We make sure we have more hands-on staff. It seems quite logical to me.”

Gélinas said another one of her private member's bills, A Time to Care Act, would require long-term care homes to provide residents with a minimum of four hours a day of hands-on care.