How Nick Grima helps the youth movement in North Bay 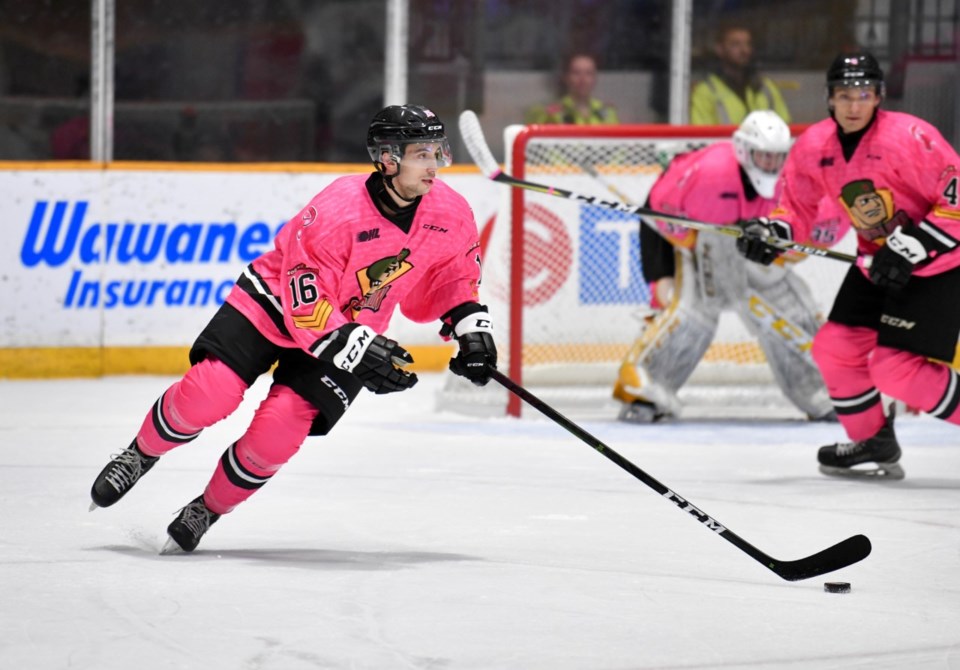 Nick Grima in his first game with the North Bay Battalion

This is the last go-around for Nick Grima. The Toronto native is playing his last season of OHL hockey and he finally got into a game on Thursday night at Memorial Gardens.

He was suiting up for his third Ontario Hockey League franchise to start his overage season. And after four seasons in the league, Grima knows that now is the time for him to pass on what he has learned to that next wave of talent after his years in Peterborough and Sarnia.

“I remember being at that younger age, when the older guys would help me out it would help out my game a lot,” he told a gathering of reporters outside the Battalion locker room this past Wednesday.

“I try not to be in their ear too much, but when I see something that I think could use some improvement I will share my input. I look at (North Bay) and I know they are a little bit younger but they definitely have the potential to do something good and it’s nice to come in and play that older guy role.”

Grima was drafted 25th overall in the 2nd round of the OHL Priority Selection by the Peterborough Petes. He finished with 10 points in 45 games played in his first year with the Petes and at near the trade deadline the following season, he was dealt to Sarnia in a major move at the time that saw forward Nikita Korostelev and defenceman Alex Black head east to the Petes, while Sarnia acquired six picks along with Grima.

After being involved in three trades, Grima says, “it’s definitely nice (to be wanted) and going from team to team, you learn something new from each of the coaches and their styles. You try to take all that different information and try to add it to my game and hope it helps out.”

Through the first five games of the season, Grima was a healthy scratch on the Sarnia Sting roster who went into the year with five overage players. That prompted Grima to take some time to be with family at home, waiting to hear if he would get the chance to play in “the O” for one more year.

“It wasn’t something I wanted to do, but I knew that basically I wasn’t going to be playing so I thought it would be best to just be with my family during that time.”

That opened up an opportunity for the Battalion to bring him north. Battalion Head Coach Stan Butler says, “We just felt that we had too many left-shot defenceman and we were asking young players to play on their off-side. It’s a difficult enough league to play in, let alone play on your off-side.”

And in his first game with the Troops in a 5-4 loss to Oshawa on Thursday, Grima helped the team by providing two assists and a +2 +/- rating.

“I try to be a two-way defenceman as best as I can,” Grima says about his game. “I’m more of a passer and a puck-moving defenceman and in the D-Zone I like to play physical and make sure the puck gets out.”

That physical style of play was showcased on Thursday, as Grima made the Generals attackers earn every inch of the ice in the offensive zone, and Butler says he likes that Grima can bring that to his young group. “I think he’s got a little bit more sandpaper than some of our other D has. He’s a little grittier but he can still move the puck and with so many young guys in the lineup, we still need guys that can show them how to compete hard.”

Through his four seasons in the OHL, Grima has put together a stat line of 10 goals and 79 points through 236 games played (including Thursday's contest). He is coming off a 30 point campaign in which he had 4-26-30 with 82 PIM and also fired 122 shots on net.

To compare the statistics to North Bay’s other overage defender Nick King who had a stat line of 8-32-40 with 30 PIM and 118 shots in 67 games played last season. These two, who play opposite sides would make for an interesting top pairing unit as both players have seemingly straddled that line of being a two-way defender that likes to take care of their own end first, and chips in offensively when they find those openings.

But with a reinforced message that the team wants to play the young guys and the fact that the Troops already had three overage players on the roster, the question was raised about how this affects the way they put out their lineup.

“I think you have to look at it this way, you can only play three overage players on any given game. So it’s not going to change how it will affect the younger guys for playing time,” says Butler.

With Simon Rose dealing with an injury, that also opens up a spot to for a younger defender in the lineup, as King was scratched from Thursday's game, keeping Matthew Struthers and Captain Brad Chenier in the lineup, along with Grima to make up their overage player complement for the Thursday night affair against Oshawa.

Looking down the road, having Grima around the team might not only be beneficial to the first and second-year players on the back end, but also for the goaltenders, Jake Vrbetic and Christian Cicigoi, two guys who are also in their first years in the OHL. Having a little more experience in front of them may give them a little more confidence in between the pipes, knowing there is someone who has been through the wringer before and can find those loose pucks and win those battles to alleviate the constant pressure on them.

To their credit, both Vrbetic and Cicigoi have done their best to keep the Troops in almost every game so far this season. Vrbetic through four games had made 147 saves on 164 shots against. That’s the sixth most shots faced by any goaltender in the league going into Thursday night’s action.

Still, the message rang clear that no matter who is pencilled in on the lineup sheet, the workload will be put onto the shoulders of the younger Battalion players.

“We don’t want to lose sight that we have to play our young defencemen,” says Butler. “The only way we’re going to take the steps to move forward here is by playing these kids, and we have to be committed to doing it. We’re hoping it’s going to be short term pain, for long term gain. One of the biggest things we want to evaluate right now as a coaching staff is looking at the ice time for these kids. If you look at their minutes, they are getting it. Secondly, we have to keep them positive and let them learn how difficult the league is. We’re trying to look at the big picture long term here.”

And while Grima won’t be a part of the long term plan since he will graduate after this season, what he can do, is provide guidance both on and off the ice which then can be translated into success by that next wave in the years to come.