Heads-up: Turtles will soon be crossing roads to nest

Orillia naturalist wants motorists to be alert in effort to preserve turtle population, which is 'falling quickly'
May 2, 2021 5:00 PM By: Nathan Taylor 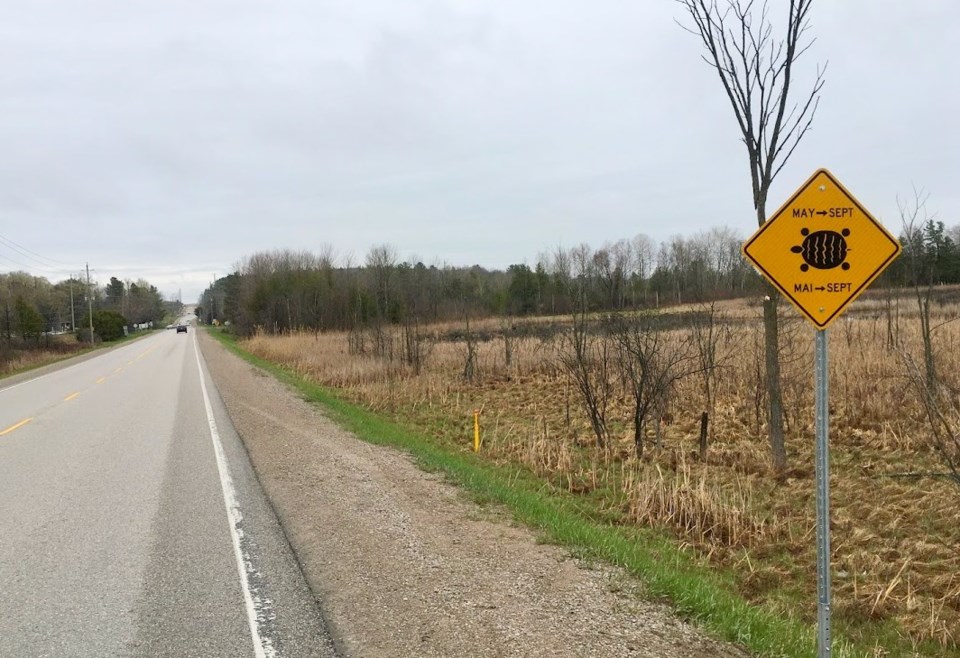 Turtle-crossing signs have been erected on both sides of Old Barrie Road near Line 15.Bob Bowles/Supplied photo

With turtle-nesting season approaching, a local naturalist is urging people to watch out for the slow-moving creatures crossing area roads.

The prime time for turtle crossing is from May to September.

“One month from now, female turtles will be coming out of wetlands and crossing busy roads to lay their eggs on roadsides that are well drained and in open sunshine,” said Bob Bowles. “These areas are the best locations for egg incubation, but many turtles get run over by passing vehicles at this time.”

A female snapping turtle can live for 100 years, but they don’t breed and lay eggs until they are between 17 and 20 years old.

“She may come out of a wetland for the first time to lay eggs ... and, not knowing about the dangers of a highway, get killed by a passing vehicle,” he said. “She would have had over 90 years of laying eggs and the potential to add young turtles to the population, but now she is dead.”

It’s critical to take steps to protect turtles because their numbers are “falling quickly,” Bowles said.

Twenty years ago, two of the eight species native to the area were endangered. Now, three species are listed as endangered, and all eight are on the list of species at risk.

“I want everybody to think about that,” he said. “Turtles are still decreasing in population.”

Bowles founded Kids for Turtles Environmental Education in 2006 and purchased “turtle crossing” signs. He convinced the City of Orillia and other municipalities to erect the signs in areas where turtles frequently crossed roads.

Since then, more than 100 signs have been put up, the most recent being along Old Barrie Road, near a wetland in the area of Line 15, erected by the County of Simcoe.

“I really want to thank the County of Simcoe, the City of Orillia and all the municipalities for putting up these signs,” Bowles said. “We have come so far in the last 15 years and now more people are helping me raise awareness to the turtle and road problem.”

About the Author: Nathan Taylor

Nathan Taylor is an experienced multimedia journalist and editor who covers Orillia and other parts of Simcoe County.
Read more