Have suggestions for the City budget?

Forgette said hearing suggestions from the public is important and they do take the comments and suggestions seriously, even if they are suggestions they have already explored or that can't currently be implemented...
0
Sep 9, 2016 8:51 AM By: Ryen Veldhuis 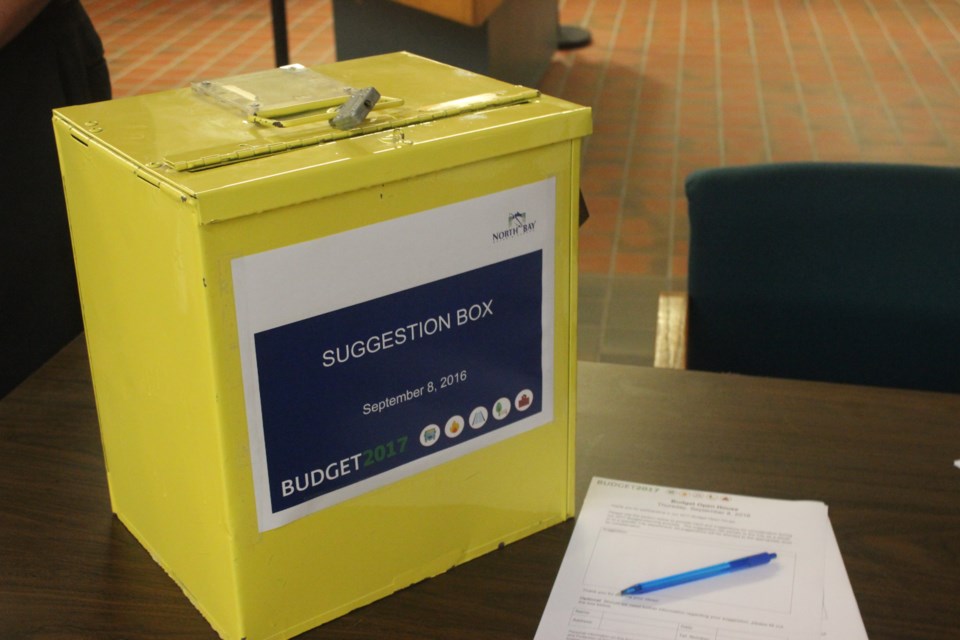 A suggestion box was a new addition for this year's budget Open House Thursday night. Photo by Ryen Veldhuis

Fewer than a dozen residents turned out for the 2017 Budget Open House Thursday night as North Bay City Council and staff made their presentation and held information booths for each department within the city. Despite this, the people of North Bay still have plenty of time and opportunities to have their suggestions heard for the 2017 budget.

Deputy Mayor Sheldon Forgette, Chair of the General Government Committee said he was a little disappointed in the public turnout from the event, but said he live streamed the budget presentation through his Facebook page in hopes of reaching a larger audience and to ensure he could keep people of North Bay informed.

“Social media is a great tool for us to get the message out to the community,” Forgette said. “With the Facebook videos I've been trying to highlight things going on in the city and it's really hard for everyone to see what's happening.”

He said that over the past few weeks he’s utilized social media more often to encourage transparency between the city and the residents of North Bay. Forgette said the evening was the start of the public process and despite a low turnout, there would be many opportunities in the future for residents to voice their opinions and give their suggestions.

At the Open House, people had the chance to write suggestions and comments for departments on sheets - not unlike previous years - but a new anonymous suggestion box was available for residents to voice their thoughts.

Residents who attended said they would have liked to see more people in town take an interest in the city's budget, but were overall pleased to see members of staff and council taking the time to make all the information readily available, as well as be available themselves to answer questions or give explanations.

“This is just the start of the whole process,” the Deputy Mayor said, noting upcoming meeting dates, hoping the process to be completed by December. “We're going to set a budget target for the next council meeting and work our way from there.”

Forgette said hearing suggestions from the public is important and they do take the comments and suggestions seriously, even if they are suggestions they have already explored or that can't currently be implemented.

For the residents who were unable to attend the Open House, feedback and ideas can be submitted to 2017Budget@cityofnorthbay.ca between September 8 and 13, 2016.