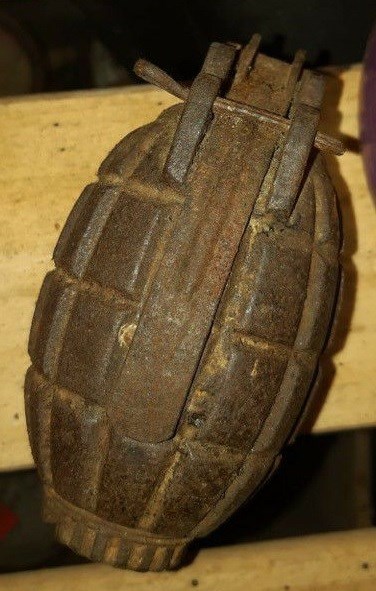 This rusted hand grenade was found in a storage shed. Courtesy NBPS.

Surprising what you can find when you clean out your storage shed.

Yesterday police got a call from someone who believed they had found a hand grenade.

"The owner of a recently acquired property was doing a clean-up including a storage shed that had not been entered in several years," said police spokesman John Schultz. "In the shed, the complainant located what appeared to be a rusty hand grenade. A North Bay Police Officer attended and confirmed that it appeared to be a Mills Defensive style hand grenade."

The officer wasn't able to determine if it was capable of exploding and the assistance of the OPP Explosive Disposal Unit (EDU) was called in. The EDU officer, who has received specialized training in the safe removal of explosives, removed the hand grenade without incident.

The grenade will be destroyed and the investigation into its origin continues.

It may seem obvious, but police want the public to remember that is you run across what you believe is an explosive or an explosive device like a hand grenade, DO NOT TOUCH IT!