'We arranged that last year. And everything was put in place but COVID came along and threw a monkey wrench into everything'
Jul 10, 2020 5:00 PM By: Linda Holmes 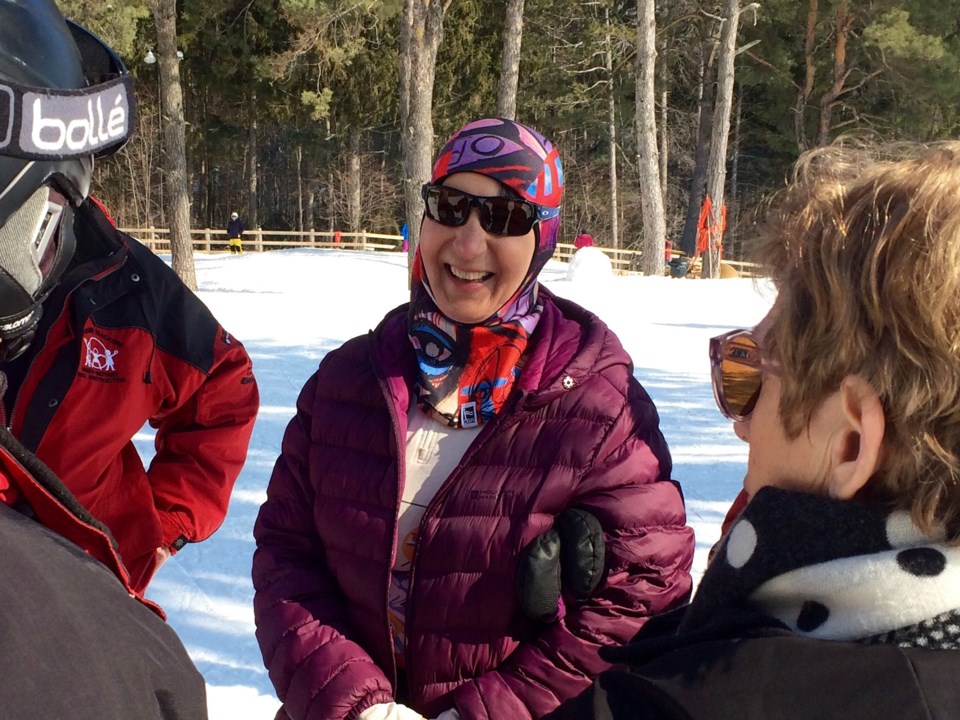 Marilyn Korzekwa meets with Nipissing Trackers members in North Bay last February where her swim across Lake Nipissing to fundraise for the group was announced Photo: Linda Holmes

The 63-year-old Hamilton psychiatrist had planned to swim 28 kilometers across Lake Nipissing from the mouth of the French River at Campbell’s Bay to Marathon Beach in downtown North Bay.

The swim was intended to raise money for Nipissing Trackers, a downhill ski program for special needs children, sponsored in part by the Nipissing Association for Disabled Youth (NADY).

July 9 to the 14 was the weather window chosen to complete the first-ever crossing of Lake Nipissing by a swimmer.

”We arranged that last year. And everything was put in place but COVID came along and threw a monkey wrench into everything,” said Rick Taylor of the North Bay Power and Sail Squadron and lead boat captain.

“It was a time set aside for us to pick the best weather day. Everybody had the time booked off and was ready to go with a few hours notice within that window when the weather looked the most favourable,” explained Korzekwa.

No one could have predicted that a pandemic over harsh weather conditions would be the reason for putting the swim on pause.

“We have postponed things due to what is going on with the COVID situation. Everything is on hold because of social distancing. We were going to have people coming up from southern Ontario. It would be really hard to do social distancing on a boat,” said Taylor.

The support boats form a protective diamond shape around the swimmer.

“There is a lead boat, a trailing boat and two inflatable dinghies on either side of her. One of those dinghies is always at her side and the other one would ferry people back and forth. Her husband would be on board bringing her with some nourishment,” explained Taylor.

“There is probably another boat involved that will be shuttling back and forth between the North Bay marina and the group where she is, and that is to bring reporters back and forth if they wanted to go.”

Until restrictions are lifted, no one knows when the swim will happen.

“We’re not sure if it is even going to happen this year. It may be postponed until next year,” said Taylor.

”I’m hoping it is just a postponement, but you never know,” said Korzekwa.

“It depends on what happens with COVID and what Premier Ford says and does.”

The swim must be sanctioned by Solo Swims of Ontario if it is to be officially recognized as a solo swim, and that is not happening right now.

“Solo Swims of Ontario is not going to sanction swims in the middle of a pandemic when all other athletic events are being cancelled. And we don’t want to be a burden on the health care system in any way either,” said Korzekwa.

“If the state of emergency does end and hospitals open up then Solo Swims might sanction swims but there will be a whole bunch of rules about social distancing and masks.”

Solo Swims of Ontario requires swimmers to must successfully swim one-third of the length of the big swim as a trial.

That swim was to have happened in June, serving as a run-through for Korzekwa and the many volunteers.

“We thought it would be helpful for everyone if we did it in the same body of water and with the same crew so everybody understood how these swims work and got into position. We were going to swim from the Manitou Islands into North Bay, the last little stretch so everyone was familiar with that,” said Korzekwa.

“We’re planning on doing that July 18 without boats to get that out of the way. I’m going to do that in southern Ontario. It will be a 10-kilometre trial.”

Marathon swimming requires the athlete to be in peak physical condition, but COVID-19 has had a huge negative impact on Korzekwa’s training schedule.

“First of all, the pools have been closed since March 14th.  Who knows when they will reopen? So there has been no training happening there. I got into the open water on Victoria Day weekend. So, I have been training hard since mid-May,” explained Korzekwa who adds some dry-land training to the mix.

“The big swim last week was 12 kilometres. This week it is going to be 14. So, I’m building up like that. The rest of the week I’m doing between three- and six-kilometre swims,” said Korzekwa.

“Last week I swam a total of 24 kilometres, this week I’m aiming for 25, working up to about 30 a week. So, I should be there by August. My training goal is to do about two-thirds or three-quarters of the swim in one go, somewhere that is a little more convenient where boats aren’t really needed.”

Korzekwa knows from past experience there are no guarantees when it comes to starting or finishing a swim.

“I’m disappointed, but marathon swimmers are used to setbacks because there are certain guidelines before we start any big swim. We’re used to waiting out the weather. So, this is kind of the same sort of thing. The season might be a wash because of the pandemic, but I’m training hard and keeping my fingers crossed,” Korzekwa explained.

“I know people who have travelled to the English Channel and never even got in the water because conditions were not favourable.”

She acknowledges that the winds on Lake Nipissing are going to be a challenge, but it is not the first challenge she has come up against swimming long distances.

“My first big swim in Lake Ontario which was 48 kilometres, I wasn’t sure whether I would actually finish that either from the exhaustion from that distance.”

Organizers are now looking at August 15 to September 13 as a tentative date for the Lake Nipissing swim.

“So, we’re just kind of in a waiting game to see whether things will open up to make it feasible,” said Korzekwa.

“The other thing with August, the sun is going to set much sooner so I will probably be coming in in the dark. You can’t really start until the sun comes up because it is so rocky at the beginning. You have to be able to see where you’re boating in the beginning.”

In the meantime, training will continue.

“It is frustrating and it requires a lot of patience,” said Korzekwa.

“We’re all hoping it can happen. This is part of athletic endeavours. But people can still donate to the Trackers who as athletes are also quite persistent and try hard to reach their goals.”

The search is on for a missing pony
Aug 3, 2020 11:10 AM
Comments
We welcome your feedback and encourage you to share your thoughts. We ask that you be respectful of others and their points of view, refrain from personal attacks and stay on topic. To learn about our commenting policies and how we moderate, please read our Community Guidelines.