Fronts fire back for four straight in victory of Battalion

“Bad pinches, they kept getting pucks behind the defence and we were always chasing to try and get the puck. And instead of getting pucks on net we were to busy trying to make a nice play,”
Nov 30, 2019 12:08 AM By: Matt Sookram 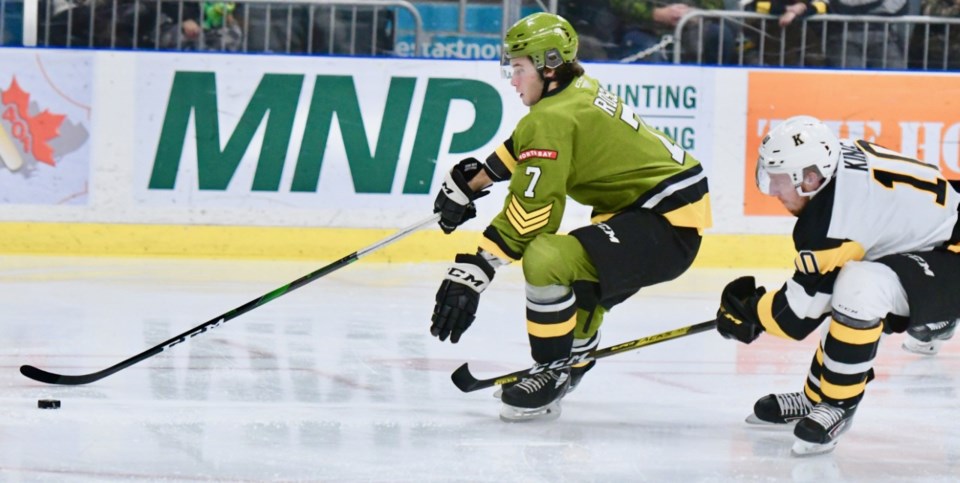 It was a complete reversal from what transpired in the first period from just 24 hours previously. Down 4-0 to Peterborough on Thursday night, North Bay jumped out to a 3-0 lead over Kingston on Friday. But by the end of 60 minutes, the result was the same despite the vast differences in the starts as the Troops come away with no points through their first two games this weekend as they fall 4-3 to the Frontenacs.

“We had a really good first period, we were really excited as a team as to what was happening, but then we got reminded that we have to play in the second and third,” says Battalion Assistant Coach Scott Wray.

The Battalion found a way to score in all three situations on the ice. They did it on five on five play first at 12:36 when Mitchell Russell (7) got a pass from Luke Moncada and beat goaltender Christian Propp for the opening tally.

They did it short-handed at 13:57 when Moncada (12) did something he has done four times already this season, and poked the puck at the defensive zone blue line, raced down the ice on a breakaway and beat the goaltender for his fifth short-handed goal of the year. That goal leads the league in that category and his 12th leads the team.

Then they scored on the power play at 17:03 with Brad Chenier (12) finished off a good cycle play to give the Battalion what seemed like a commanding 3-0 lead, especially when you consider they held the Frontenacs to just six shots in the opening frame.

“We got a five on five-goal, a short-handed goal and a power play and on the bench we started thinking, ok here we go,” says Wray.

“But all of a sudden they got one, and stuck with it. But then they got one in the third and we just stopped playing it seemed like.”

Justin Pringle (1) was the one that breathed life in to the Frontenacs at 6:57 of the second period and spent the majority of that 20 minutes firing shots at Battalion goaltender Joe Vrbetic, who mad 13 saves in the second.

But the attack from the Fronts continued in the third. About mid-way through Zayde Wisdom (14) scored at 9:28 to make it a one goal game.

“We made some tough plays on our own part,” says Wray when looking at what led to the Frontenacs come back.

“Bad pinches, they kept getting pucks behind the defence and we were always chasing to try and get the puck. And instead of getting pucks on net we were to busy trying to make a nice play,” says Wray.

The teams traded a few chances through the next seven minutes after the Frontenacs tied the game, but with less than a minute to play, 15-year-old exceptional status player Shane Wright made an exceptionally brilliant play by getting a pass from Wisdom across the blue line and going to the net all alone, deking the goaltender Vrbetic for a backhanded beauty that gave Kingston the lead.

They held on for the final 55 seconds and erased a three-goal deficit for their fifth win in their last six games, and move six points clear of North Bay for the last spot in the Eastern Conference.

It was a tough way to end the game for Vrbetic who, despite a three-goal lead, was keeping North Bay in the game due to the fact that they were heavily being outshot and could’ve been trailing if not for Vrbetics calmness between the pipes.

“He was good when he needed to be,” says Wray.

“They were getting a lot of shots at the end and he was holding the fort for us, unfortunately, they just got one more goal than us.”

The loss gives North Bay a tenth straight loss at Leon’s Centre over the last five years. They haven’t won a game in Kingston since November 7th 2014.

The road trip continues Sunday when North Bay visits Ottawa, who are 18-6-0-1 on the year and 7-3-0-0 on home ice. Wray says as the visiting team they can’t overthink the games. He says, “when you’re on the road, sometimes simple is good. Just get pucks on net, chip pucks behind their D and play in their end. Get cycles going and build confidence off that.”