'I would like to thank everyone who has helped me get to this point including my coaches, teammates and family'
Feb 6, 2020 9:30 AM By: Chris Dawson 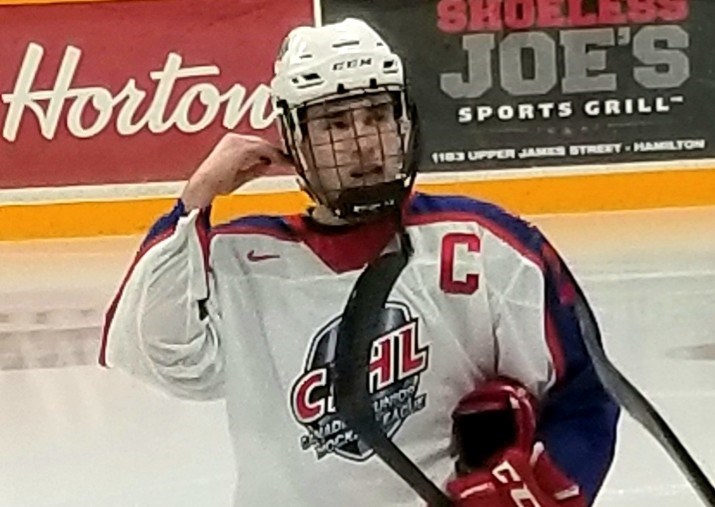 Cole Craft during warmups at the CJHL Prospects Game. Photo by Ken Pagan/BayToday.

The North Bay native who plays for the Rockland Nationals of the CCHL junior A league received an NCAA Division I hockey commitment from Lake Superior State University located in Sault Ste. Marie, Michigan.

"I am very proud to announce my commitment to play Division 1 college hockey at Lake Superior State University," Craft stated via social media on Wednesday.

"I would like to thank everyone who has helped me get to this point including my coaches, teammates and family."

It's been a memorable season for Craft who won a silver medal with Team Canada East at the World Junior A Challenge in Dawson Creek back in December and then he was named as one of a trio of North Bayites to take part in the CJHL Top Prospects Game in January in Hamilton.

The six-foot-one winger is having a solid season in Rockland, where he has recorded 22 goals and 28 assists for 50 points in 43 games so far this season.

The 2017 eighth-round pick by the OHL's Sarnia Sting had put his focus on playing hockey in the NCAA in the future.

“I’m getting to play in every situation, which is important for me in developing as a player and off the ice as a person as well,” Craft said of his experience so far in Rockland to BayToday's freelance sports reporter Ken Pagan at the CJHL Prospects Game in Hamilton.

“I think Rockland has put a program in place that is going to help a lot of players make that next step, whether that’s major junior or NCAA. That’s what I’m working toward right now, is to get a scholarship to the U.S., so hopefully, my hard work pays off,” stated the second-year junior A forward who played midget for the North Bay AAA Trappers.

Craft is the latest North Bay player to receive an NCAA Division 1 commit. Others include defenceman Ben Brunette to UMass-Lowell this summer and Nate McDonald who currently plays goal at Cornell.