First there was fire

Some wine producers in South Africa have to choose which vineyards to save and which to let succumb to the drought
0
Feb 24, 2018 1:37 PM By: Vin Greco 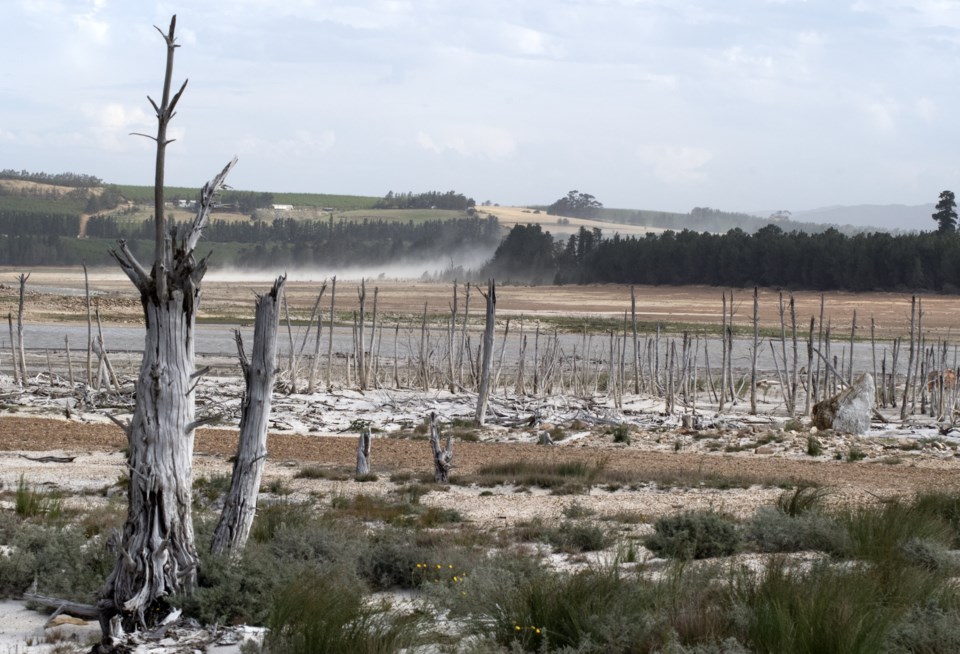 With the climate being in tumult it seems, there are often crises striking wine country.  At the end of harvest last September in California, devastating wildfires tore through wine country. Now, on the other side of the globe, the crisis in South Africa’s Western Cape is drought.

Predictions are that by June 4, 2018, Cape Town will be out of water. There, residents have already been ordered to limit showers to 90 seconds, and not to flush toilets unless absolutely necessary. At the beginning of February, the daily allowance of water per person was slashed from 87 to 50 litres per person.

To put that into perspective, Canadians averaged about 250 litres per person daily according to Government of Canada statistics for 2011.

Piotr Wolski, a South African hydrologist with the Climate Systems Analysis Group, explains that the Cape region has just gone through a three year drought that is considered a ‘once-in-628 years’ weather event, and the reservoirs are down to about 25 per cent of capacity – a year ago they were at 42 per cent.

This is having a significant impact on the wine industry, particularly with that segment that is geared to the production of low-cost bulk wine which relies heavily on irrigation.

With water rights cut by 50 per cent in the Western Cape, wine producers are having to choose which vineyards to save.

Quotas have already been triggered to cut the amount of water available to vineyards by as much as 80 per cent according to a “Quartz Africa” article of Jan. 26. 60 per cent of South Africa’s wine exports are in the bulk category, and there is concern in the industry that, if South Africa can’t meet the demands, others - such as South America, Australia, and China – will happily take up the slack. Once the market has disappeared, it may not be easy to get it back.

There are social issues, too, associated with the water shortage and wine. Michael Fridjhan, a leading South African wine writer wrote in the “Daily Maverick” of Feb. 21, “The wine industry may be a major contributor to the economy of the Western Cape, but it is politically alienated.” Despite the fact that the industry employs over 300,000 workers, it won’t be easy to justify water for vines against the demands for drinking water or water to grow more essential foodstuffs.

When it comes to finer wines – and this apparently incudes wines selling for more than 50 Rand (basically $5 and up) – irrigation usually isn’t as essential. In fact, in France’s “Appellation Controlée” designated districts, irrigation is illegal. One of the reasons is that it can result in bigger yields and lower quality.

Of greater concern is the need for water in the wine-making process, which requires a lot of it for cleaning equipment and wineries. Wineries may need to invest in their own waste-water recovery and re-cycling plants, which could have a price tag of about $100,000. While expensive, it may just become a cost of doing business.

As it stands with fine wine production, the smaller berries resulting from the drought will likely be of very good quality. As for the stress on the vines, over time this could become an issue, but grape vines can be very deep-rooted and drought-resistant.

Last year, Alex Dale, founder of Radford Dale Winery on the slopes of Helderberg Mountain, told me about old bush vines that were growing in the region on the hillsides, basically abandoned. They were, and remain, un-sprayed, un-irrigated, deep-rooted and hardy. The yield is small, but the quality is everything one could hope for.

It is anticipated that like the past three drought harvests, the 2018 vintage will have concentrated flavours, though production levels may be down 20 per cent, according to “Quartz Africa.”  As for prices, we can expect them to be stable, as it is important for the industry to remain competitive internationally.

It is obviously too early to know how all this will resolve; however, I am reminded of the Chinese curse: “May you live in interesting times.”  It certainly applies to the world of wine.

Flat Roof Manor Pinot Grigio 2017, $1 off at $10.95 through Sunday. This wine has a depth of flavour and silky mouth feel that one might not anticipate. Pear and clove are sensations triggered here: the warmer the wine, the more prominent the taste. Best, though, slightly chilled.  Platter’s South African Wine Guide tells us that the 2016 had a splash of Sauvignon Blanc and Chenin Blanc incorporated in the blend, which could help to explain the up-scale flavour.

Fleur du Cap Chardonnay 2017, $12.95 is light and fruity with warm, golden apple brightness.  It is easy sipping with good flavour persisting though the finish, where a satisfying lime accent kicks in.

Two South African Reds on the March 3 Vintages Release merit our attention. The Nederburg Manor House Shiraz 2014, $16.95 is rated excellent to outstanding by Platter, who refers to “plenty of ripe black fruit wrapped up in charry, savoury oak.”

If you are trying to decide which horse to bet on, it helps to check its pedigree.  In the case of wine, that can be a good way to go, too.  Glenelly Lady May Cabernet Sauvignon 2011, $34.95, comes from the Stellenbosch property of May-Eliane de Lencquesaing who previously owned Chateau Pichon Longueville Comtesse de Lalande in Bordeaux, where, under her guidance, the wines rivalled the top growths of the region.  The comparable vintage of the French wine is 4 to five times the cost of the Lady May, but we can expect the commitment to quality to remain high in the South African example. The Wine Enthusiast gives it a 93, calling it “bold and powerful yet layered and nuanced.” Speak with your consultant, if interested.

Mulleri Soffio Vermentino di Sardegna 2016, $16.95, is yet another of the terrific and distinctive Italian whites that we have been seeing for a couple of years now.  Expect mouth-filling flavours of stone fruit balanced by a stony minerality and crisp citrus on the finish to round things off.

Kellerei St. Magdalena Pinot Grigio 2016, $17.95, hails from Italy’s most northerly wine region the Sud Tirol-Alto Adige. This promises to be vibrant and intense with tangy fruit and perhaps a nutty note, according to Vintages.

Susana Balbo Signature Barrel Fermented Torrontés 2016, $19.95 – Torrontés is a grape that Argentina claims as its own, and though it may have originated in Galicia in Spain, what grows in Argentina is distinct and very aromatic. robertparkercom bestowed a 93 here, calling it “elegant, complex, tangy and toasty.”

William Hall North Coast Chardonnay 2016, $19.95 - From northern California, this wine offers melon and apple with good balance and vanilla spice notes, finishing with a good zip of acidity.  Vintages suggests it would be great with shellfish.

Marqués de Toro Finca la Moura 2012, $12.95 – here is a wine from northern Spain made from the Mencia grape.  Humble-seeming, perhaps, but the Wine Enthusiast loved it, from its “ripe raisiny aromas” to its “choppy palate with oaky flavors of dried cheese and cream” to its “end notes of foresty berry fruits, earth, licorice and hard spices” – “impressively solid.”  Between the lines, I’m reading gutsy, rugged and flavourful. – 91

Chateau de Ribebon 2015, $17, is a “Wine of the Month” from Bordeaux. “With ripe tannins and blackberry generosity over the wood aging, this is still structured yet ready to drink.” – Wine Enthusiast -91.

Fabre Montmayou Reserva Malbec 2015, $17, from Argentina’s Mendoza has all the edges polished off.  Silky, with perfect balance, it suggests dark berry and juicy cherry with a hint of black licorice, all presented harmoniously. – scores regularly in the 90’s.

Bastide Miraflores Syrah/Vielles Vignes Grenache 2015, $19.95, is the other “wine of the month”, this time from the Roussillon region in the southern corner of France on the edge of the Mediterranean.   robertparker.com compares it  to an American icon, the Sine Qua Non Syrah… which retails for about $200 U.S.  “A ripe sexy, heady beauty…deep, unctuous, open knit and layered” with a “seamless and silky profile” - 94.