'It is engaging certainly not only for our young professionals but also us old people as well, and the networking opportunities it presents for everybody for myself and people my age right down to our 20-year-old entrepreneurs'
Feb 13, 2020 1:00 PM By: Chris Dawson 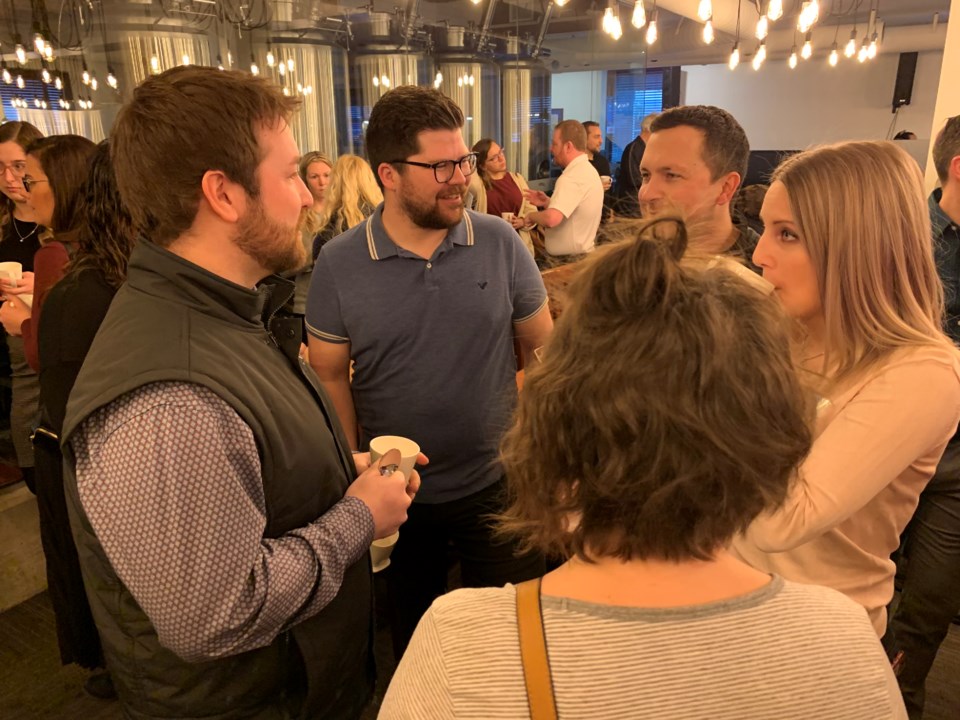 Bobby Ray (left) speaks with other entrepreneurs this morning. Photo by Chris Dawson/BayToday.

The #FiftyTwoCoffees business networking program that began last year is brewing up for a second year.

There's a twist. Now, the program which was offered to young professionals has now moved to all ages of business owners.

"We learned a lot last year, we called it a pilot program," said Bobby Ray, manager of the Granite Club and one of the key organizers of the #FiftyTwoCoffees initiative in North Bay.

Last year 84 under-40 young business professionals went on a year full of weekly coffee meetings done one-on-one in the community.  The initiative had its initial kickoff last January at Twigg's. Early Thursday morning, at a larger venue at Cecil's, saw business people of all ages attending the official launch of year two.

The networking program, organized by Ray and the Young Professionals committee from the North Bay & District Chamber of Commerce, will also be more structured and meetings will be confirmed through a calendar platform.

"People needed a bit more of a push and some accountability measures have been built into the program," said Ray.

Peter Chirico, President of the North Bay & District Chamber of Commerce, is taking part in the networking adventure this year.

"It is engaging certainly not only for our young professionals but also for us old people as well, and the networking opportunities it presents for everybody for myself and people my age right down to our 20-year-old entrepreneurs, " said Chirico.

"Those types of connections are invaluable."

Rebecca McGlynn, Chair of the Chamber's Board of Directors, loves the positive vibe the program is creating around town.

"I think #FiftyTwoCoffees is a great opportunity for business people to connect, meet one-on-one, and create new business relationships," said McGlynn who is also taking part in the program herself this year.

"I think it is good for business in North Bay and the district and I am really happy about all the positivity surrounding this program."

Ray says one of the big parts of the program has been the social media stories entrepreneurs have been sharing online about their specific meetings.  He hopes that trend continues in 2020.

"It was not required but we certainly encouraged it," said Ray.