Father and son prepare for Martial Arts trip of a lifetime

'I have been lucky to spend so much time with him over the years and have guidance from such an amazing martial artist and an amazing dad'
Apr 23, 2018 10:30 AM By: Chris Dawson 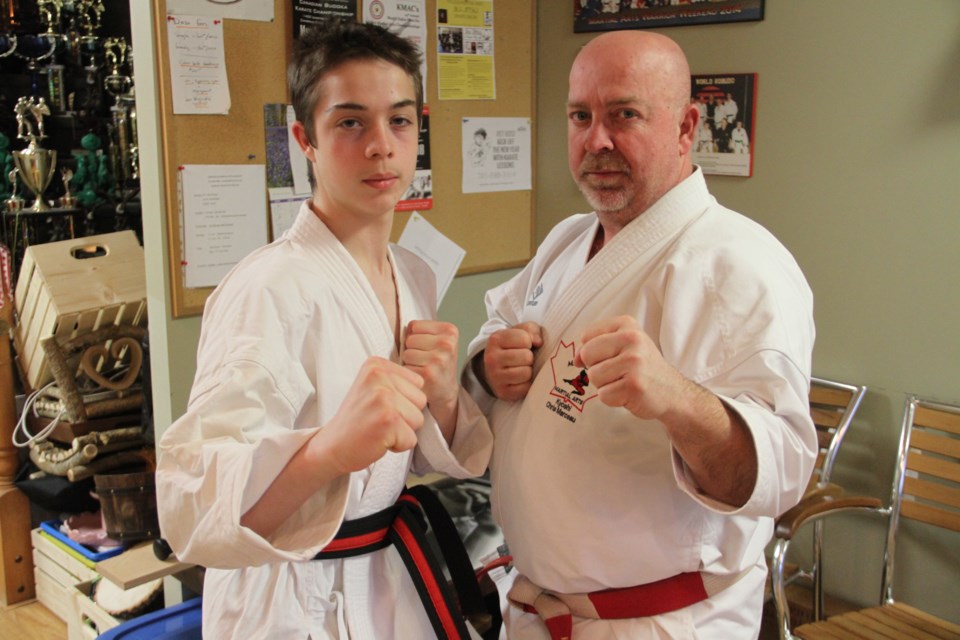 Chris and Nicholas Marceau are preparing for an amazing overseas experience.

Chris Marceau and his son Nicholas, of Marceau’s Martial Arts and Fighting Systems in North Bay, will be traveling to Athens, Greece on May 1st where both will compete at the World Kobudo Federation’s World Martial Arts Convention.

“It is amazing, it will be the first time out of the country for me and out of the continent along with my first flight so I am very very excited and of course getting to represent Canada as a martial artist is something that I love and something most people only get to dream of,” said Nicholas, who turned 15 on Sunday.

Chris Marceau, has been involved in Martial arts for decades, he says taking part in an international event with his son is something he will remember forever.

“Although we have competed all over Ontario and Quebec on the same venue, to have his first flight, his first international competition out of the country together - what a father and son moment,” he said that includes representatives from 34 countries.

Nicholas will compete in open hand forms, weapons forms and possibly point sparring, while Chris is teaching and competing in all three disciplines as well.

The younger Marceau is looking forward to the weapons forms, as he has found a passion for swords.

“Ever since I used to watch Ninja Turtles as a little kid, I always wanted to learn to use a sword and when I got the opportunity with Alain Lavoie which is the name of the teacher in Montreal, I just jumped on it and I was very eager to learn and it is easier to learn something when you want to and enjoy it so,” said the Ecole Publique Odyssee student.

Regardless how either perform, the event will truly be another memorable martial arts family affair for this North Bay father-son duo.

“I don’t really remember a time when I was not doing the martial arts,” said Nicholas.

“I have been lucky to spend so much time with him over the years and have guidance from such an amazing martial artist and an amazing dad.”

LOTTO MAX second prize not so bad for local couple
Sep 26, 2020 8:31 AM
Comments
We welcome your feedback and encourage you to share your thoughts. We ask that you be respectful of others and their points of view, refrain from personal attacks and stay on topic. To learn about our commenting policies and how we moderate, please read our Community Guidelines.