Fake firearms continue to be a worry for police

'I am very concerned about the prevalence and presence of imitation firearms and other firearms that are in our community that are being used for criminal offences'
Nov 15, 2019 3:00 PM By: Chris Dawson 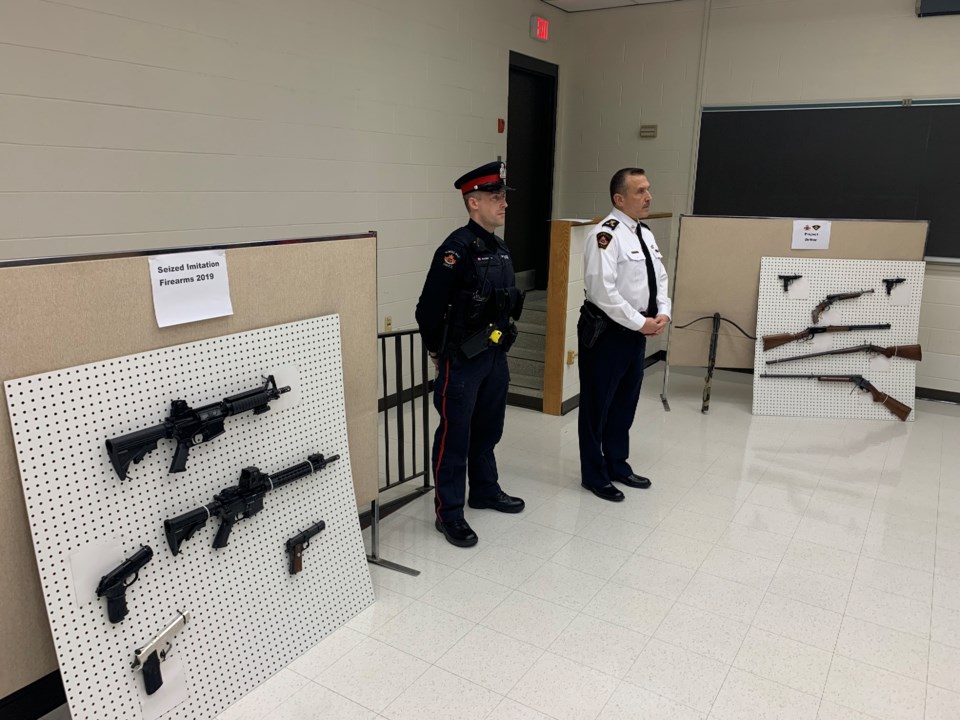 An officer and Chief Scott Tod stand between two gun displays. The guns on the left are all fake, and the ones to the right are real. Photo by Chris Dawson/BayToday.

The North Bay Police and the OPP held a press conference to release information on Project Drifter which resulted in a massive drug seizure and 30 arrests.

However, part of that investigation also revealed another challenge police are having to deal with these days.  That’s imitation firearms, which were put on display and even for experts have become very hard to distinguish.

“The imitation firearms I am really concerned about,” said Tod.

“Primarily in North Bay, we have seen increased activity and use of firearms in committing criminal offences. Last December we had a homicide happen within the city as a result of a firearm so we are very concerned about that. We have also seen firearms seized in the other communities we are talking about going east towards Mattawa and west towards West Nipissing.”

The police also showed off some real guns that were seized as well including a pair of homemade zip guns.

“I was shocked to see we had two of these seized in our community,” said Tod.

Karl Thomas, Acting Superintendent for the OPP,  also agrees that is becoming harder to know what is real and what is fake these days.

He says firearms, real or fake are a province-wide concern.

“The production of firearms can be done in several different ways. You have your traditional manufacturer then they make different adaptive things to make a weapon from a semi-automatic to a fully-automatic and then you have different techniques with 3D printers now that can actually produce firearms which is a real concern for law enforcement because it is something we can’t have a lot of control over because people could make them on their kitchen table if they want to,” said Thomas.

Tod says his officers have very little time to decide whether they need to use deadly force to stop a criminal pointing a gun that they cannot just assume is fake.

“I am very concerned about the prevalence and presence of imitation firearms and other firearms that are in our community that are being used for criminal offences and for police officers to make that split-second decision whether it is in broad daylight or dark hours is a very difficult decision to make,” admitted Tod.

“We train our officers how to react quickly to life-threatening situations for themselves or the public and a lot of that involves in regards to firearms response by police officers and other less-lethal options that we may have but in the presence of a firearm I am gravely concerned about the safety of our officers in our community.”