The fire hazard is predominantly 'high' throughout our region but two nearby areas — West Nipissing and the Greater Sudbury area — are designated as 'extreme'
May 17, 2021 10:00 AM By: BayToday Staff 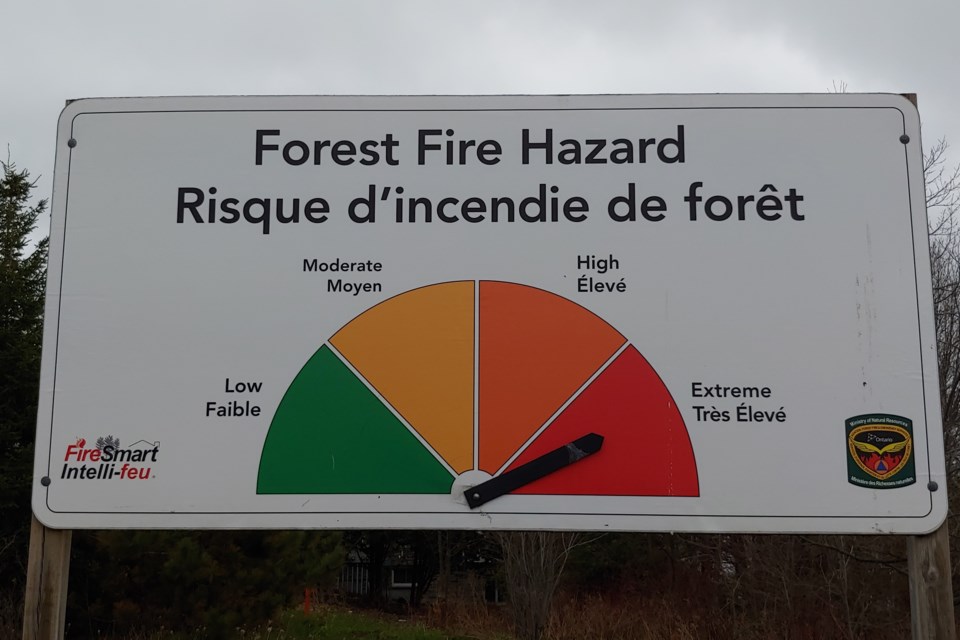 West Nipissing is showing an extreme fire hazard, according to AFFES.Stu Campaigne/BayToday

As of Sunday evening, West Nipissing is among a handful of areas in the Northeast region designated with an extreme fire hazard.

The fire hazard is predominantly high in the Northeast region. The Far North showed a low to moderate hazard as of Sunday afternoon.

No Restricted Fire Zones are currently in place in Ontario's fire regions. So far this year, there have been 74 forest fires in Ontario. That's ahead of the 46 reported by mid-May in 2020 but below the 10-year average of 105.

In the Northeast Region, there were two new wildland fires confirmed by late afternoon, Sunday.

Bancroft 4 was confirmed late this afternoon west of Skootamatta Lake. It measures 4 hectares and was not yet under control at the time of the update.

There are three other active fires in the region, they are either being held or under control.

To see the fire hazard near you, check the interactive fire map here.

From April through October, people using outdoor fires must follow strict guidelines under the Forest Fires Prevention Act of Ontario to ensure their fires are properly managed, according to the Ministry of Natural Resources and Forestry.

Anyone who starts a fire outdoors must take all necessary steps to tend the fire, keep it under control, and make sure the fire is out before leaving the site. A person failing to burn safely could be fined and held responsible for the cost of putting out the fire. People living in municipalities should check with local fire officials for bylaws on outdoor fires.

The MNRF reminds the public to use caution when performing any outdoor burning. In order to dispose of yard waste and woody debris, you are encouraged to use methods such as composting or using your local landfill. If you must burn, follow Ontario’s Outdoor Burning Regulations.

Fires are to be ignited no sooner than two hours before sunset and extinguished no later than two hours after sunrise. Always have tools/water adequate to contain the fire at the site. Know the rules for safe outdoor burning.