'Even if you have received the COVID-19 vaccine, the majority of our communities are not yet fully immunized. This means that, for the moment, everyone must continue to avoid close contact with people outside our households, regardless of whether we have had the vaccine'
May 12, 2021 4:30 PM By: Len Gillis, local journalism initiative reporter 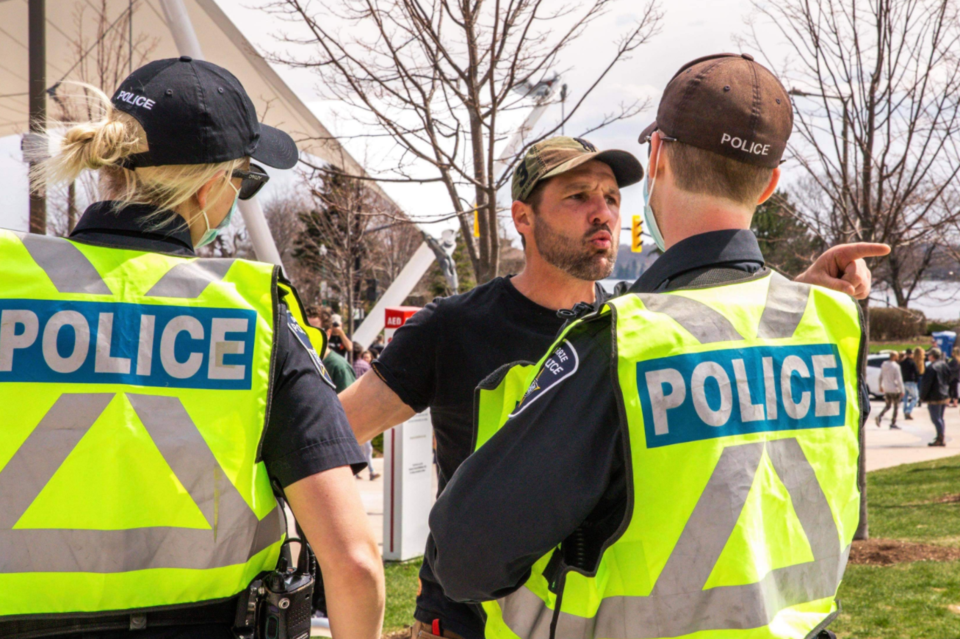 A man protesting provincial lockdown measures is shown at a 'freedom rally' at Meridian Place in Barrie on April 24. Photo submitted

Police services and OPP detachments around northern Ontario have been handing out tickets to citizens who choose to violate Ontario's COVID-19 restrictions. Based on recent news releases and information from several police agencies, dozens of northerners have been fined in connection with violations of Ontario's Emergency Management and Civil Protection Act (EMCPA) in recent weeks. This is especially true in the case of gatherings.

See: North Bay police have issued over $15,000 in fines to waterfront protesters

Most recently, on May 9 in Kirkland Lake, Ontario Provincial Police officers responded to a report of a large indoor gathering at a residence on Harding Avenue. Police said the gathering was in contravention of the EMCPA.

Police said 23 individuals were ticketed and charged. In addition, two individuals were charged with criminal offences of obstructing police officers. The occupant of the home was also charged for hosting and organizing a gathering in contravention of the Act.

"The OPP is doing its part to support the Ontario Government's Health Emergency Declaration to limit the transmission of COVID-19. It is important that the public understands that there are consequences for individuals who defy the EMCPA," said the OPP news release.

Also on May 9, Timmins Police responded to a noise complaint on Royale Street in that city.

"While responding to the noise complaint, Timmins Police officers had occasion to locate and interview a total of five persons gathered around two vehicles listening to music at an elevated volume level," said the news release.

Police said none of the five people shared a legitimate common address. Police said this meant that all five persons were in breach of the EMCPA. Accordingly, two men aged 19 and 20 and three women aged 18, 19 and 20 were served with Province Offence Act notices. Police said each offence notice carried a fine of $880 upon conviction or entering a guilty plea.

"In light of recent Covid (sic) positivity numbers, the Timmins Police has adopted a firmer approach when confronting such violations as it is deemed to be necessary and appropriate to do so in order to better protect people from their own lack of good judgment and the indulgence in unsafe behaviours," said the Timmins Police news release.

The rules with respect to gatherings don't just apply to places. The rules also apply to vehicles.

OPP in Kirkland Lake were conducting traffic enforcement on Highway 112 when they stopped a vehicle in Otto Township.

"There were four individuals in the motor vehicle and the investigation revealed that they were from different households and travelling for non-essential purposes in contravention of the Emergency Management and Civil Protection Act (EMCPA)," said a police statement.

Each person was charged and ticketed.

Another event occurred on May 1 in South River (Machar Township) where OPP officers from Almaguin Highlands Detachment responded to a house on Rose Anna Drive. Police said a group of people were discovered to be in contravention of the Stay At Home order. Police said six people were charged and ticketed.

Also on May 1, but this time in Kirkland Lake, OPP officers "investigated the circumstances surrounding a protest that was held at Kinross Pond in the Town of Kirkland Lake."

Police determined that the protest was held in contravention of the EMCPA. As a result, police said eight people were charged and ticketed.

A day earlier on April 30 in Sault Ste. Marie, local police officers attended an illegal gathering held at Bellevue Park to ensure it remained peaceful and to investigate the gathering.

"The investigation identified three people as having organized the illegal gathering, two from Sault Ste. Marie and one person from Spring Water Township, Ontario," said the news release from the Sault Police Service.

It was then on May 8 that SSM officers attended another gathering held at Bellevue Park.

"All three of the people deemed to have organized the April 30, 2021 illegal gathering were in attendance and were charged under the Reopening Ontario Act. A conviction for organizing an illegal gathering will result in a minimum fine of $10,000," said the release.

While on the scene of that May 8th gathering, officers charged 13 people under the EMCPA for attending an illegal gathering. A conviction for violating the EMCPA will result in a fine of $750, said police.

A couple of days before that in Thunder Bay, police said they were made aware of a potentially large gathering that was being organized.

"The gathering was organized by a group that was staging similar events at various cities amid a cross-country tour. Following an investigation, police determined the organized gathering, which took place on the evening of Tuesday, April 27, was in violation of the province’s current Stay at Home Order," said the release from Thunder Bay Police Service (TBPS).

"Two event organizers -- one person from Thunder Bay and one person from British Columbia -- were charged under the province's Emergency Management And Civil Protection Act," said the release. Police said one of the men from out of town was released and must return to the city for a future court date.

"We all have obligations regarding the provincial orders. We will enforce when situations dictate, such as incidents where there has been a blatant disregard of the province’s emergency orders," said the TBPS news release.

In most other cases, the members of the Thunder Bay Police Service will continue to focus on the 4 E’s:

On April 26, during a late-night traffic stop on Pine Street North in Timmins, police determined that three individuals in the car did not share a common address.

"As stated in previous public notices, the educational approach and generous use of discretion originally adopted by the Timmins Police has come to an end, especially in light of recent distressing numbers related to Covid positivity in our area," said the Timmins Police release.

A similar event took place in the Sault on April 18 when police were notified of an organized gathering taking place on St. Mary’s River Drive. Police said they attended and spoke with eight persons at the scene.

"Even if you have received the COVID-19 vaccine, the majority of our communities are not yet fully immunized. This means that, for the moment, everyone must continue to avoid close contact with people outside our households, regardless of whether we have had the vaccine," said the release which also included comments from Algoma Public Health.