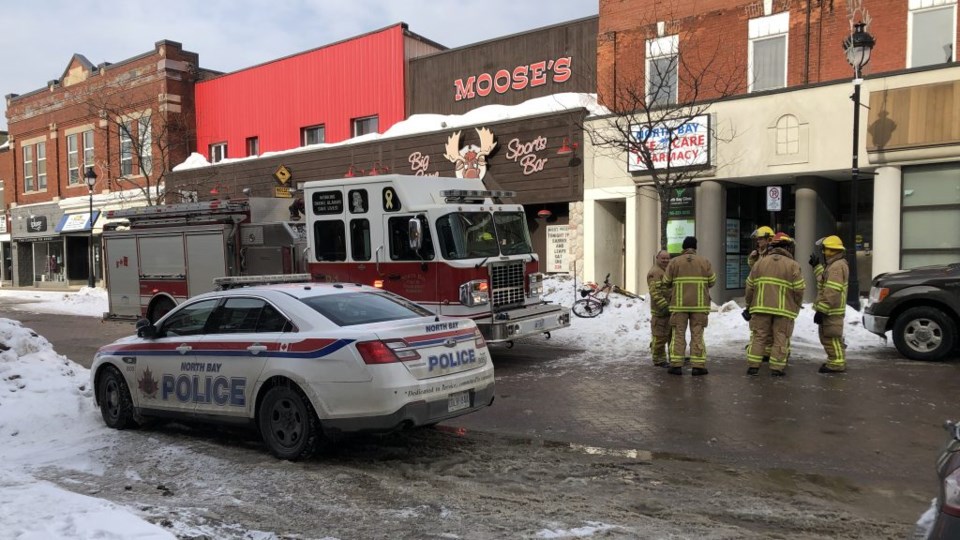 A handful of residents received undetermined injuries in connection with a fire which occurred in a four-unit apartment at 136 Main St. E. today.

The 100 block was closed off by police and firefighters Sunday afternoon as North Bay Fire and Emergency Services received a call at 3 p.m.

“Once we arrived on the scene we saw there was a little bit of a disturbance on the outside. Once we went inside it was definitely a working fire,” Platoon Chief Greg Kraft told Rogers Radio.

“Smoke and flame, but it was contained in the hallway, it was definitely arson.”

Kraft says a few people were taken to hospital - with one individual brought out of the building by the crews.

“They called our 9-1-1 and said they couldn’t get out, couldn’t breathe, so we got in there and got them outside,” Kraft said to Rogers Radio.

Kraft says injuries, if any, are undetermined as the investigation continues.

Fire Chief Jason Whiteley says on top of that, firefighters had to stop another resident from trying to re-enter the building.

"Emergency crews also had to deal with a fight between three persons outside of the building. North Bay EMS treated and transported two people to the hospital and North Bay Police have detained one person," Whiteley said in a media release.

The 100 block of Main Street East was closed to traffic for just over an hour.

"The first fire crew arrived in just over three minutes and immediately began an interior attack and search and rescue," said Whiteley. "Fire crews contained and extinguished a deliberately set fire in the hallway and rescued one person as well as containing another resident from trying to re-enter the building."

A dollar loss has not been determined at this time. North Bay Police and the North Bay Fire Prevention Division are continuing the investigation.

North Bay Fire wants to remind everyone in cases where smoke or fire may prevent you from exiting your home or apartment building, it is best to be prepared for an emergency like this by practicing "sealing yourself in for safety" as part of your home fire escape plan. Close all doors between you and the fire. Use duct tape or towels to seal the door cracks and cover air vents to keep smoke from coming in. If possible, open your windows at the top and bottom so fresh air can get in. Call the fire department to report your exact location. Wave a flashlight or light-coloured cloth at the window to let the fire department know where you are located.

Once you're out, stay out! Under no circumstances should you ever go back into a burning building. If someone is missing, inform the fire department dispatcher when you call.