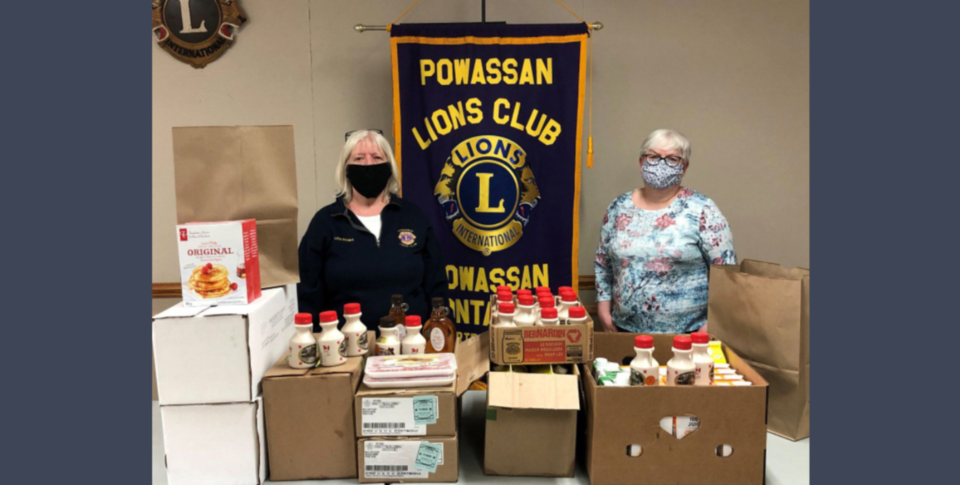 A fundraiser by the Powassan Lions Club to replace a traditional pancake breakfast this time of year has shattered all expectations.

Each year the Lions host five consecutive Sunday pancake breakfasts leading up to Easter and coinciding with the annual Powassan Maple Syrup Festival.

But with COVID-19 still a factor, the festival was cancelled again this year and, combined with maximum occupancy limits in buildings, the Lions weren't able to hold the weekly pancake breakfasts.

Not to be outdone, the Lions organized a Do-it-Yourself Pancake Breakfast kit where people ordered a pre-made kit and cooked their pancakes at home.

Each $30 kit included a pancake mix, a 250 ml bottle of locally made maple syrup, 24 breakfast sausages and a 1.75 litre jug of orange juice.

But the three-week fundraiser saw the Lions sell 203 kits in total.

“We were very pleased with that,” Oshell said.

She adds it became clear early on that the goal of 100 kits was easily achievable, when the campaign was close to the halfway mark within a week of launching the promotion.

“But that includes $600 in straight donations from people who simply gave us money and didn't take the kits,” Oshell said.

The money will go into the Lions' general pool of funds and will likely be used toward the North Bay Regional Health Centre's Cancer Care Close to Home campaign.

The Lions have made a $25,000 commitment to the Close to Home campaign to be paid in annual instalments of $5,000.

Of the 203 kits that sold, 26 were donated to the Powassan Food Bank by local residents.

Early on one person bought five kits specifically for the food bank.

“Other people that ordered the kits would order one for themselves and a second for the food bank,” Oshell said.

The breakfast kits were to be picked up by the purchasers Wednesday at the Lions Den.

On that day Diane Cole, who serves as the assistant coordinator of the food bank, was also on hand collecting the kits destined for the food bank, and thanked the Lions for their promotion because it helped keep the food bank shelves stocked.

At 8 a.m. Wednesday morning, members of the Lions and a couple of their spouses showed up at the Lions Den and began assembling the breakfast kits.

“It helped that we came out of lockdown and went to yellow because we were allowed up to 10 people in the building,” Oshell said.

“We had a good number of the kits made up when people started arriving at 9 a.m. for the drive-through pickup and we were done by 1 p.m. the same day.”

While 10 people were assembling the kits inside, two were outside the building taking the breakfast kits to the people in their cars and trucks.

“So they would drive up, give us their names and number kits ordered and whether they prepaid or not,” Oshell said.

“The kits were then walked out to them and they never had to enter the building.”

When asked whether the pancake breakfast promotion was something the Lions could repeat, Oshell admitted that although it's easier to organize the Do-it-Yourself kits, the Lions would like to return to the in-person events once COVID has passed.

“Normally we run the five Sunday breakfasts,” she said.

“I can tell you the Do-it-Yourself Pancake Breakfast was a lot less work because you're not cooking breakfasts from 9 a.m. to 1 p.m. for five Sundays in a row. So as successful as this was and a lot of people saying it was great, it's not like our traditional pancake breakfast. It would be nice to get the people of the community together for the sit down breakfasts and visiting with one another.”

However, Oshell adds the sit down breakfast and other fundraising events the Lions have that involve crowds won't be possible for a while yet in a COVID environment.

But, Oshell said the Lions have been discussing various fundraising ideas that don't break COVID rules on social gatherings.

“We'll see what the future holds.”