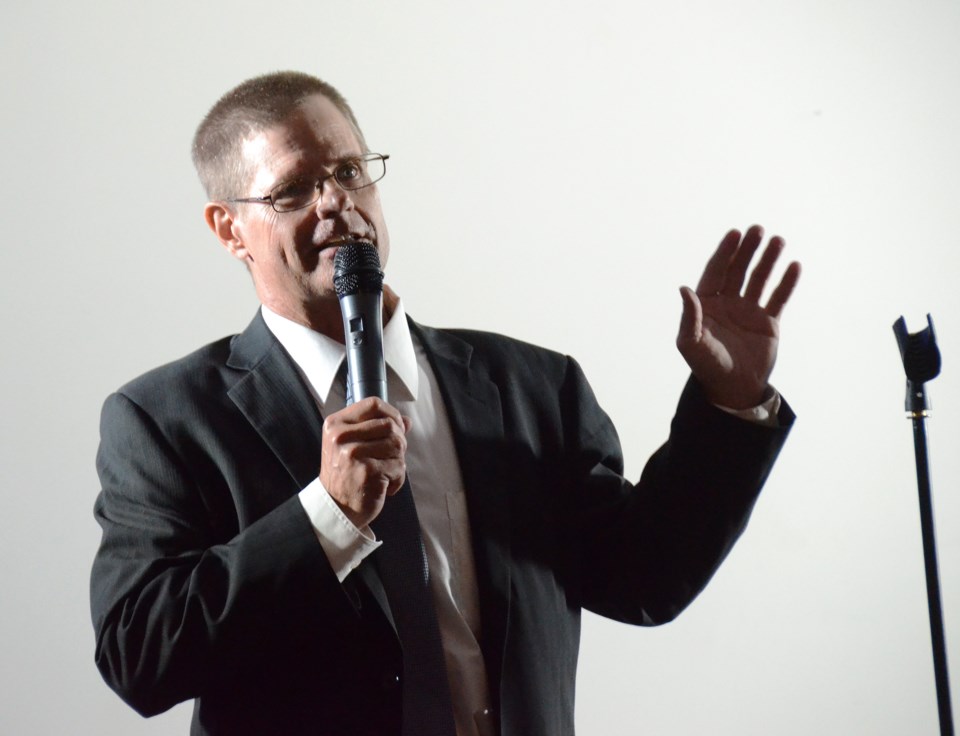 Dave Dale wanted a challenge and he figured taking up stand-up comedy was a good one.

“I tried a couple of things and it was clear I was not comfortable at a podium talking about serious stuff,” he said.

“I would start to get choked up at anything that was close to the heart there. It was tougher to talk about. So it was about personal and professional development.”

Local comedian Doug Bies encouraged Dale to give it a try.

“He [Bies] kept encouraging me to go to the open mics that went on at some of the local bars in town,” said Dale.

“Eventually I said what the hell and I gave it a run. It started out pretty cool, the first one I don’t even remember what I said because of all of the adrenaline running through my veins. I got up and I got down and I tried it again and the second time it was actually fun and I did alright so I was kind of hooked.”

After doing some stand-up routines at local bars and organizing a handful of comedy night fundraisers in the city, the former reporter will join a group of professional comedians on stage for the first time November 17. Dale will open for comedians Amish Patel and Morgan O'Shea at the Summit Nightclub that night.

“No matter how it goes, I'll learn a lot and that's what it's all about for me,” said Dale.

Dale has always been a strong communicator in print, but translating that talent vocally has been something he has been working on.

“Stand-up comedy, for me, is about learning a new skill,” he said.

“Joke writing is way different than column, feature or news writing, although some of the same techniques can be utilized. There's still a setup process, introducing a topic with a transition into specifics. That's similar to writing stories, but every time I take a mic in hand, I'm discovering how important timing and flow is to delivering a punchline.”

He’s learning crowds can be different too, but Dale enjoys using his news background to help his act.

“A local crowd likes to laugh about local things that is what I am finding,” he said.

“Because I was a North Bay journalist for 18 years I have a pretty good idea what people are thinking and talking about. If I look at it from a sideways view I even find some humour in it for sure. There is a lot of material there.”

“I don't know if I'll have that many familiar faces at the Summit,” he admitted.

“Patel and O'Shea fans, and the bar-crowd stand-up fans in general are probably 10 or 20 years younger than my crowd. I definitely won't be wearing a suit.”

Regardless, Dale just hopes to continue to get better and continue to embrace the rush that comes with stand-up comedy.

“The payoff is if I can come up with a joke and then present it with some type of timing that everyone enjoys I get a rush out of that,” he said.

“I feel good. It gives me something to think about aside from the serious stuff in life. It gives me an outlet to kind of make fun of the world around us, you kind of get the bug.”

Good morning, North Bay!
Feb 26, 2020 6:00 AM
Comments
We welcome your feedback and encourage you to share your thoughts on this story. We ask that you be respectful of others and their points of view, refrain from personal attacks and stay on topic. To learn about our commenting policies and how we moderate, please read our Community Guidelines.