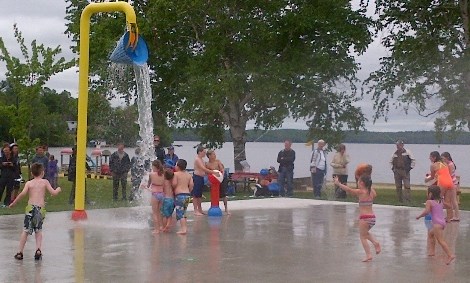 North Bay is slowly moving towards having its own splash pad. Many people now drive a few minutes south to take advantage of the excellent pad in Callander. Photo by Jeff Turl.

The city’s capital budget was passed last night by council, and while they have some ambitious projects with price tags equaling $20,624,195 set aside for the 2018 capital budget, none stood out quite as much as the seemingly long-awaited splash pad being added.

The $52,500 line item is titled as ‘splash pad infrastructure’ meaning it’s just the beginning of the project anticipated for 2018. Deputy Mayor Sheldon Forgette, chair of General Government said there was still a lot of work to be done with their community partner.

“We’re working with a community group to get the project together and eventually have a splash pad,” Forgette said. “There were a number of us working on council with community groups to get a splash pad in town and we have one that will help fundraise to get one in North Bay.”

Coun. Shogren said he’s heard plenty of members in the community asking where and when the North Bay splash pad would arrive, and assured that 'this is the start.’

And while members of council supported the capital budget, splash pad and all, Coun. Tanya Vrebosch spoke up, wanting to be clear that such a project would carry a hefty annual cost to operate.

“I remember thinking we’d draw the water from the lake because it makes sense, but for health concerns, they have to use treated water for it,” she advised. “We’re on water meters so any water we use for the splash pad is going to be an operating expense that’s going to flow through the city.”

Vrebosch said through a rough estimate—using the 50% fixed, 50% variable water rate model—it would cost the city about $40,000 annually through the operational budget.

“I just want people to be aware,” she said. “I’m not trying to tell them it’s a bad thing, but there are additional costs and the bathrooms and change rooms would be an additional capital cost. It’s nice to see council support this but they need to realize it’s there. As of tonight, council seems to have endorsed the splash pad.”

And while the city is contributing $52,500 to the infrastructure, earlier this year the Rotary Club of North Bay and Heritage North Bay are also contributing to the project, with the Club committing to raise $250,000 for the project.