'With the lack of software updates, there is a risk that confidential items on the agenda could become compromised by outdated system security.'
Aug 9, 2020 9:00 AM By: BayToday Staff 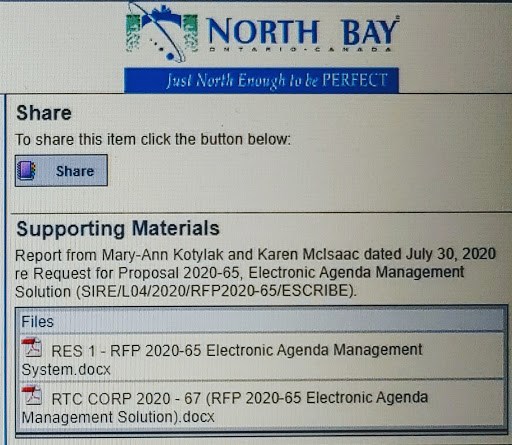 This meeting agenda software cannot be updated and will receive no technical support as of December.

It's being billed as a move to prevent North Bay City Council agenda documents from falling into the wrong hands.

According to a report prepared by City Clerk Karen McIsaac and Mary-Ann Kotylak, the City of North Bay's purchasing manager, updates to the SIRE system used to prepare agendas for meetings have been unavailable since 2015 and technical support will go off-line this December.

"With the lack of software updates, there is a risk that confidential items on the agenda could become compromised by outdated system security," reads the report to council.

The staff recommendation is for Council to approve the award of a contract to eSCRIBE Software Ltd. in the amount of $111,541.36 (plus HST) for the "implementation of a new electronic agenda management solution and ongoing licensing, support and upgrades for five years, with an option in favour of the City to extend the contract on the same terms and conditions for three additional terms of up to one year each."

The item is scheduled to be addressed during Tuesday's virtual meeting of council.

See related story: City Council is taking steps to ensure electronic meetings continue until the end of the year

The new agenda management system will allow staff to prepare reports "using an electronic document workflow process" and will allow the Clerk to prepare minutes during council meetings in real-time, according to the report. The system will also allow for conflict of interest declarations to be submitted by council members electronically.

Following the initial $29,075 (plus HST) for licensing and training,  the $21,000 (plus HST) average cost per year for the remaining four years for ongoing software licensing support and upgrades will come from the Information Systems operating budget.

Currently, agenda packages for council and committee meetings are generated on SIRE but that system was acquired by Hyland Software in 2015. Since Hyland carries a similar agenda product, the company discontinued SIRE.

"With the withdrawal of technical support by Hyland," according to the report, "all remediation would become the sole responsibility of the City’s Information Systems Department which would have limited options available to resolve third party issues."

The staff report advises the City did have the opportunity to switch to the Hyland software, "but the licensing fees were based on a per-user basis which was a significant increase from the current licensing fee structure."

The successful bid from eSCRIBE came from among three received from a public request for proposals and was evaluated by the Purchasing Manager, the City Clerk, the Deputy City Clerk and the Manager of Information Systems. The evaluation considered experience; qualifications; solution details and capabilities; project implementation and schedule; support; additional items of interest; and, price.

North Bay City Council will hold two virtual meetings Tuesday. A special meeting is scheduled for 6:15 p.m. to address changes to the procedural by-law related to the COVID-19 pandemic. That will be followed at 6:30 p.m. by the regular meeting of council.