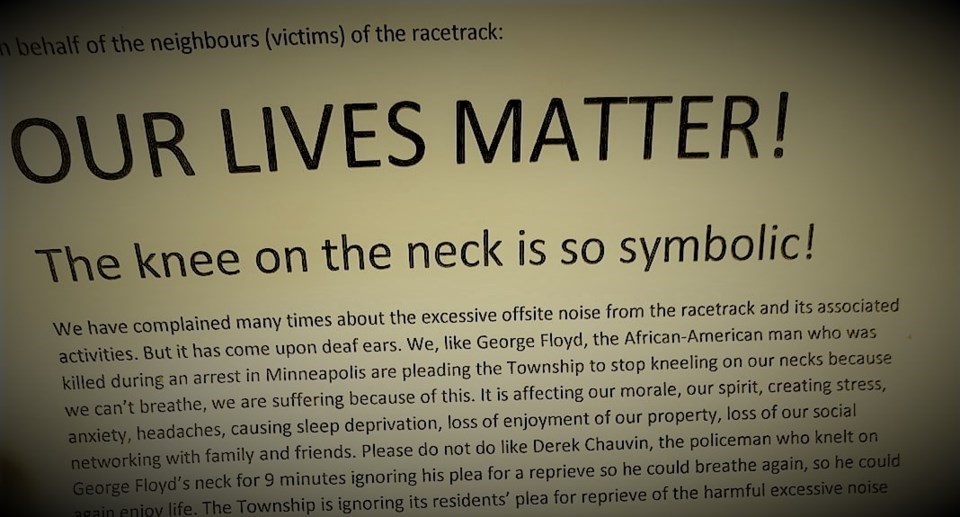 A letter circulated in Bonfield equating drag strip noise to the oppression of BLM and the police killing George Floyd was widely panned on social media September 2020.

Add another $11,900 to the Township of Bonfield budget for elected officials not getting along and the plot has thickened over who was behind the controversial ‘Our Lives Matter’ letter.

The double-digit invoice, approved for disbursements at a virtual meeting last week, is for the first of several Integrity Commissioner investigations stemming from communications between mayor, council, and staff in 2020.

While the IC report is already posted on the township website, it doesn’t come before council until Tuesday’s meeting.

David King, Bonfield’s Integrity Commissioner, found Mayor Randy McLaren breached the township’s code of conduct in how he communicated to councillors Sylvie Beaudoin, Marc Vaillancourt and Eric Foisy. King, however, ruled in McLaren’s favour on Beaudoin’s complaint over the mayor allowing a wedding to take place in the public park and fire department involvement at a drag strip event. Other complaints about how McLaren didn't authorize virtual meetings through the summer because he had that power under the state of emergency provisions were dismissed as beyond King's scope as IC.

“I have reviewed the email of the Respondent (McLaren) to the Complainant (Beaudoin) on June 12, 2020 and find the language used by the Respondent to be patronizing and condescending and not indicative of the kind of language that a head of Council or any member of Council should be using,” King wrote. The wording of that email, however, was not quoted in the report.

King also found McLaren stepped over the Code of Conduct in a June 9 email to Foisy, while two other emails were found to be acceptable.

Beaudoin's complaint read: "The Mayor treated Councillor Eric Foisy inappropriately and in an abusive and bullying manner during the June 9, 2020 Council meeting when the Mayor snapped at Councillor Foisy and said, “Maybe you’d like to give her the wording and for once start earning your pay.”

Already looming over the head of taxpayers is Mayor McLaren’s defamation lawsuit against the township and several council members over a motion council passed in June 2020. In a split vote, council had ordered all communication by the mayor and chief administrative officer be copied to all members of council.

McLaren’s statement of claim alleges the wording injured his reputation by painting him as “dishonest” and “untrustworthy.’” The township and councillors Beaudoin, Foisy and Vaillancourt are named as defendants. Peter Johnston, CAO, also expressed intent to sue over defamation.

The tally for the municipality's legal costs is not yet known.

The Integrity Commissioner noted that separate investigations over complaints by Beaudoin are on-going, although a complaint by Foisy was dismissed.

One of the complaints by Beaudoin alleges McLaren breached Conflict of Interest rules by bringing the municipal lawyer into a meeting in the fall, without notice to council, to discuss the motion that sparked his defamation suit.

Meanwhile, McLaren confronted Foisy during last week’s meeting and asked him if he was the person who authored the ‘Our Lives Mattter’ flyer circulated to Bonfield residents through Canada Post last September.

The flyer was roundly criticized for comparing the killing of a Black man by U.S. police last year to how some residents feel about drag strip noise at the Bonfield Event Park.

“We have complained many times about the excessive offsite noise from the racetrack and its associated activities,” the letter states. “But it has come upon deaf ears. We, like George Floyd, the African-American man who was killed during an arrest in Minneapolis are pleading the Township to stop kneeling on our necks because we can’t breathe, we are suffering because of this.”

McLaren said a Freedom of Information request to the post office noted Foisy’s Development Road address on the flyer for circulation, with it being the insert as “political” in nature.

Foisy did not confirm or deny the allegation and he made no visible or audible response in the video recording of the Zoom meeting. An email request by BayToday for comment from Foisy about the flyer also did not get a reply.

In a related matter, right before McLaren raised the issue of the flyer, Foisy had brought up an outstanding noise complained about the Event Park's Test and Tune held last summer. He didn't indicate who made the complaint but read it out and asked why the bylaw officer hadn't followed up. McLaren said the Event Park owner was advised of the complaint by the bylaw officer and himself but admitted the "downfall" of the process may be that no one "closed the loop" by letting the author of the noise complaint know it was acted upon.

Foisy shook his head to the negative, indicating that the complaint author had not been contacted.

With the ex-police officer Derek Chauvin on trial for murder this month, McLaren said the source of the flyer is important to address as it reflects on the community and council.

“It certainly caught the attention of the Event Park in that they found it quite disturbing in that it spoke to the murder of an individual and equating that murder to their Event Park,” McLaren explained at the meeting, “and by extension, the municipal council the staff of the municipality and condoning murder is what the document led people to believe.”

McLaren said parts of the letter indicate the author was desperate about the drag strip situation, that there was “no compromise” and “it’s them or us and this is our last stand.”

“You can extrapolate what you like from it,” he added, “looks like a suicide letter or a threat to public safety … in my 25 years of municipal politics I've never seen such a shameful document.”

McLaren asked the council members if they had any comments or questions about what he stated regarding the flyer. Councillor Beaudoin was absent.