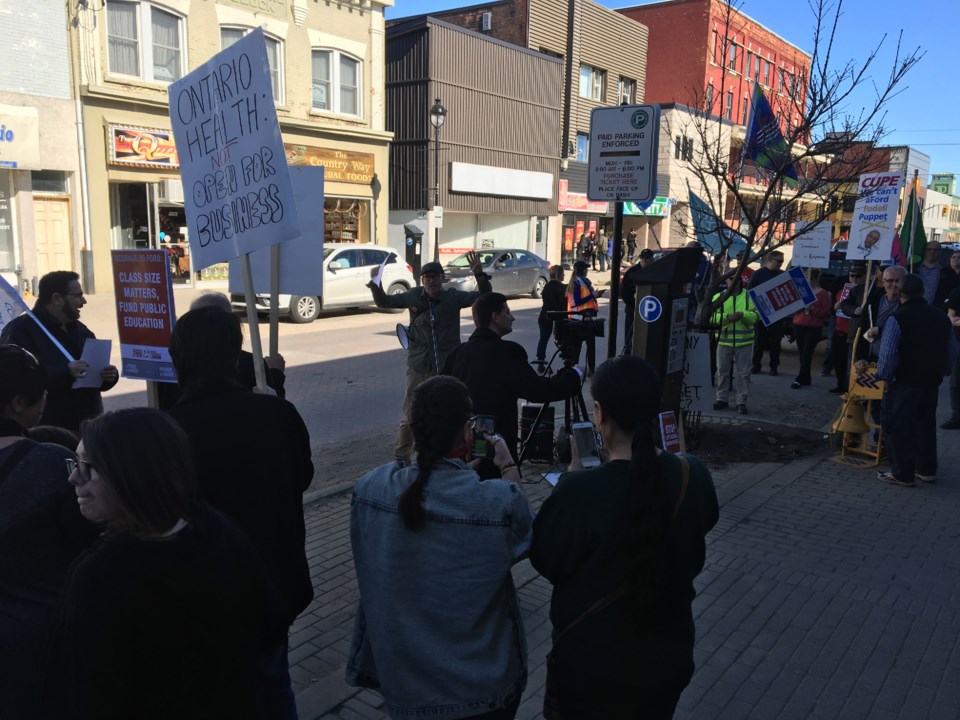 Chants of “They say cut backs we say fight back” resonated along main street around the rush hour Wednesday afternoon.

This was the second of two rallies against potential budget cuts coming down from the provincial government.  Both took place in front of Nipissing MPP and Finance Minister Vic Fedeli’s constituency office.

While the first event - which took place at noon - focussed on health care, speakers at this event spoke on a broader scale of budget related topics including health care, minimum wage and possible cuts to the education system.

Organizers of this event called it a community rally and not a labour rally.

“We need support in our schools,” stated school councillor Christine Golden to the crowd.

The government calls these rallies fear mongering but Golden says she would love to bring Mr. Fedeli along to her workplace for a week.

“Come with me and let me open up your eyes to what it is we see every day and these poor teachers and education staff that try to educate but sadly they are having to back peddle and deal with behaviours and all that kind of thing,” said Golden, who visits a middle school and two elementary schools in the Near North Board.

“I am not blaming the kids, they need support and then the education can happen.”

Troy Simkins represents school support staff in the Near North.

“Unfortunately the Ford government has not mentioned support staff in all of their public announcements,” said Simkins, President of the OSSTF.

“Instead they have sent memos to all the school boards across the province with specific lines and grants that are going to be cut from the budget for next year.  Those grants will absolutely effect staffing levels of my support staff.”

The Fedeli office still insists protesters do not need to get into panic mode.

“The education budget increases by $700 million this year,” stated Fedeli in a media release.

“And we are investing $13 billion over 10 years in capital improvements; $1.4 billion this year alone.  As well we are investing $1 billion to build 30,000 child care spaces in our schools. We have taken great care to build a sustainable education plan where no teacher is being fired, despite what our opponents often claim.”