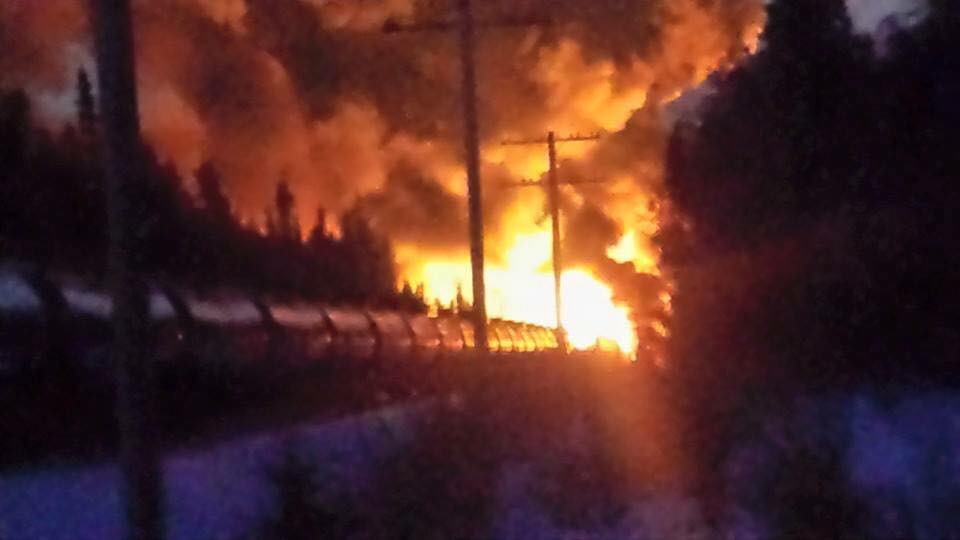 Ontario Provincial Police say the derailment occurred at about 2:45 a.m. about four kilometres southwest of Gogama, Ont., which is about 80 km south of Timmins.

They say the derailment involved 10 train cars — some of which caught fire and entered the Mattagami River System.

OPP Const. Gillian Coughlin says officers are at the scene to ensure public safety and the Gogama Fire Department was called to assist in containing the blaze.

Police say residents of Gogama and the nearby Mattagami First Nation are being asked to stay inside until further notice for public safety due to possible smoke inhalation.

"There has been nobody injured which is crucial, but we definitely do have an issue going on there with cars that caught fire," Coughlin said. "That's why we're requesting people stay inside."

Roxanne Veronneau, owner of the Gogama Village Inn, said the fire quickly spread throughout the river and destroyed an exit bridge out of town.

"We have two exits in Gogama to get in and out of town and the bridge apparently is burned down," Veronneau said. "So now we have one other exit, which is relatively close to where all of this is going on."

This is the third CN derailment in northern Ontario is less than a month, and the second in the same area.

A CN freight train derailed on Thursday 100 kilometres east of Hornepayne, Ont., but there was no leakage from the 16 residue tank cars that contained crude oil or gasoline.

On Feb. 14, a derailment occurred in the same area south of Timmins, when 29 cars loaded with crude oil and petroleum distillates derailed and caused a fire.

Veronneau says the town is filled with safety crews working to clean up the damage and that large plumes of smoke can still be seen nearby.

"The good part about that is that the cleanup crew, they had all of the equipment over at the first derailment which made it quicker to get their hands on the equipment and bring it over to our site," Veronneau said, adding that people are concerned about what could have happened.

"People are kind of sitting on edge right now... they're not impressed because it could have happened right here. Look in Quebec what happened to them and how many lives were lost.

"My inn is about 200 feet from the train tracks and it's a major concern for the people in town ... If it had happened in the middle of town we wouldn't be having a conversation right now because we would have gotten taken out. It would have been horrible being this close and the track runs right through the middle of Gogama."

Coughlin says the cause of the derailment is still under investigation and the Ministry of Environment has been notified, but that residents of the nearby Mattagami First Nation are being advised not to consume water from the community source at this time.

Via Rail says passenger service is being cancelled between Winnipeg and Toronto.

A train that left Vancouver on Friday night will terminate in Winnipeg on Sunday night, and Via says it will look at providing alternate transporation for passengers.

A train scheduled to leave Toronto for Vancouver on Saturday night has been cancelled and passengers will be responsible for making alternate travel arrangements.

OPP say local highways have been closed in the area, including Highway 144 in both directions.

The Transportation Safety Board of Canada has sent investigators to the site, which they say is about 37 kilometres from the location of last month's derailment.

CN says the cars met the newer, improved CPC-1232 standard, which have enhancements such as half-head shields, improved top and bottom fitting protection, and normalized steel.

But it says the cars still "performed similarly'' to those involved in the deadly derailment in Lac-Megantic, Que., two years ago, which predated the changes.

The agency says last month's incident "demonstrates the inadequacy'' of the new standards and is urging Transport Canada to quickly introduce enhanced protection standards to reduce the risk of spills when these tanks are involved in accidents.

— By Adam Miller in Toronto