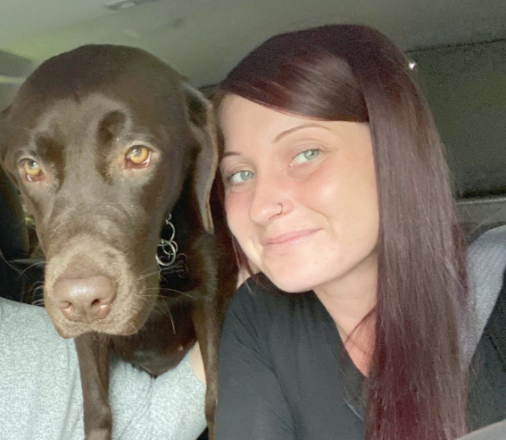 Lexi and her owner, Kandiss Gravel, just hours before the accident. Supplied photo

One of the first things Kandiss Gravel of North Bay and her dog, Lexi, did after their drive home from Oakville Veterinary Emergency Hospital in Mississauga was stop at her favourite Tim Hortons.

Lexi is always gifted a plain Timbit by service workers at the restaurant, who were concerned for her well-being, says Gravel’s sister, Danielle Duguay.

“You go there and you mention Lexi and they all know who you’re talking about,” Duguay says. “They know all my sister’s dogs by name.”

Lexi, an 11-month-old chocolate Lab, was struck by a truck on July 11, sustaining a shattered left femur, a dislocated sacroiliac joint (near the pelvis), a split pelvis and a lung puncture. Vets also opened up her abdomen to make sure muscle didn’t detach from her hip bone. Lexi was in surgery for almost 10 hours.

Lexi remained in hospital a few more days because of bruising to her bladder, which made it hard to urinate. After a few days, Gravel suggested the vets let Lexi off her leash to pee and, sure enough, she was able to, Duguay says.

Since her surgery, Lexi has remained in her regular high spirits, Duguay says.

“She’s very happy. She just wants to be with her brother and sister all the time . . . She’s her old self, but a little bit slower.”

Lexi is limited in what she can do. She's given four different types of medication and wears a cone which, Duguay says, she gets stuck on walls. The dog is unable to climb stairs on her own.

Unable to go for walks, Gravel wanted to buy Lexi a ramp to help her enjoy her car rides. But with the financial stress of the surgery and COVID-19, Gravel was worried she wouldn’t be able to afford one, says Duguay.

Duguay says there was only one ramp left and PetSmart gave her a discount to help Lexi out.

“It’s great to see that even people who don’t know Lexi’s story are still able to help out,” she says.

Lexi's stitched wounds will take two weeks to heal. Afterwards, it's six more weeks of bed rest, which Duguay says will be difficult for such an energetic and stick-loving dog.

“It’s a huge relief off our shoulders. We’re still getting donations daily, which are amazing to see. We’re just so happy that Lexi was able to come home with all the help people have been giving us.”

Duguay says every penny was worth it.

“We’re so glad we fought for her because to see her now versus when we brought her in is completely different.”